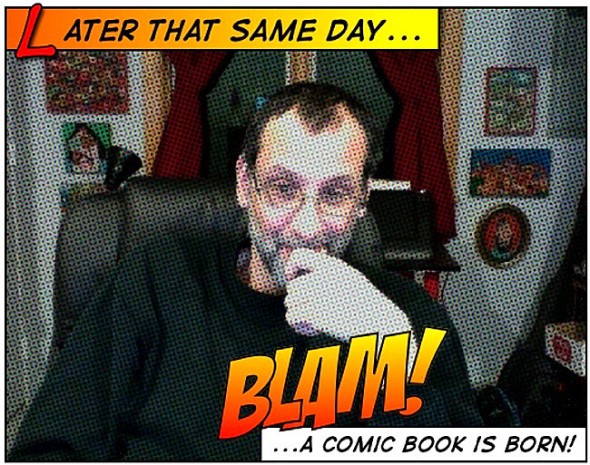 If leaping tall buildings in a single bound is all it takes to become as a superhero, then the three Greene County veterans that appear in Michael Fleishman’s most recent comic book “The Liars’ Club” surely qualify. Earl Ellis, Charlie Bath and Jack Newhouse became the heroes they read about as kids after serving their country during World War II and returning to live their lives and tell their stories. The comic book about them came out of a chance meeting Fleishman, a local graphic artist, had one morning with a group of Greene County veterans who were talking at the McDonald’s in Xenia.

“It was hard not to notice them — the whole corner booth was buzzing, and it looked like they were having a good old time,” said Fleishman, who couldn’t resist asking who they were. “They said, yeah, it’s a liar’s club.”

The comic book “The Liars’ Club” tells the stories of Earl, Charlie and Jack, who returned after the war to settle in the Xenia area. They played golf together for 25 years, and now all three are widowers, who have met regularly for the past six years to talk, joke and share stories about the past. The comic was produced in partnership with the Greene County Council on Aging in honor of Veterans Day this month. The book and some of the original prints will be on display, along with a collection of Fleishman’s acrylic and oil paintings, pastels and pen and ink drawings, at the Yellow Springs Arts Council gallery through the Thanksgiving weekend.

Charlie is portrayed with smiling eyes and a navy blue service cap. He served in the signal corps and returned to marry the love of his life, after whose death he refused even the thought of dating anyone else. Earl is drawn with a mischievous grin and a calm stature. He worked at Wright Field (later Wright Patterson Air Force Base) before he joined the service in 1940 to do landing craft repair. When he returned from the war he worked for the space program helping to build space shuttle reentry pods. Jack wears a combat medic cap for his service as a surgical tech. When he returned, he played the E-flat alto horn in the Ohio State University marching band and then became a teacher and a boy scout leader.

The comic book form fits the subject, Fleishman said, because in his mind, Earl, Charlie and Jack are everyday heroes who risked their lives to fulfill what they felt was a solemn obligation to their country. And, according to the comic, when they returned they continued in service to their communities as a teacher, an engineer and a DP&L technician.

“They talked a lot about America at the time of the war, the guys they served with, and the sense of obligation they felt to serve,” Fleishman said. “To them, it wasn’t political — they’re patriotic from the heart.”

The 23-page comic uses Fleishman’s highly stylized photos and color cartoons to show the three friends as they are now, while the single tone water colors by Mark Gibbs depict a more historic take on their lives. As a commercial artist and faculty member at Edison Community College in Piqua, Fleishman appreciates the impact the digital age has had on the comic book industry, and the changes that have occurred since the “golden age” in the 1940s when comics were mostly about line drawings. But he continues to champion the need for basic artistic skills that allow graphic artists to use computers as creative tools rather than an end in themselves.

“Drawing is behind everything…you got to know the basics because the computer is just another tool,” he said.

Fleishman was trained as a fine artist but went into commercial art as a career. He has written six books on the business, philosophy and technique of illustration and design. And he has also continued to pursue his personal creative work in the form of painting and drawing. Some of his cubist works and colorful abstracts will be displayed this weekend at the Arts Council show.

Both the fine arts and the graphic design come into play in the comic book, which Fleishman found was a good vehicle to use to portray the rich content of the lives of the three veterans. Fleishman was as taken with their stories as he was impressed by their spirit and their friendship.