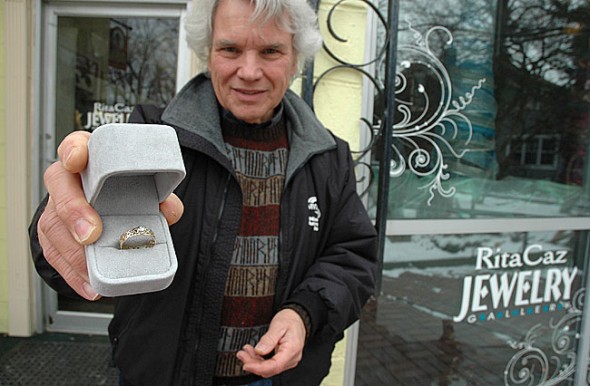 Rita Caz recently set an unusual diamond ring for customer Vernon Dunlap. The diamond itself was created from the cremated remains of his wife, Roberta, using a process that distills and concentrates the carbon in human ashes under high heat and pressure. (Photo by Megan Bachman)

Ashes to ashes, dust to diamonds

Local jewelry store Rita Caz has long helped customers honor deceased friends and relatives by incorporating their locks of hair and cremated remains into rings and necklaces. But a recent request by a former Springfield man who now lives in Arizona to set a diamond ring made from his wife’s ashes was a first.

“I think it’s just thrilling,” said Gail Zimmerman of Rita Caz last week. “It’s something that will carry through time.”

Vernon Dunlap decided to turn the ashes of his deceased wife, Roberta, who died of kidney cancer in 2010, into a diamond to keep her memory close. Rita Caz set the diamond, which was made from the carbon in one cup of ashes, in a ring that also combined the couple’s wedding bands.

The $3,500 process of turning ashes into a diamond was not expensive when compared to the cost of embalming and burial, Dunlap said, and is additionally a “memory that you can keep.”

Zimmerman said most memorial requests at Rita Caz are to seal cremated remains in lockets and pendants that can be worn on necklaces as a reminder of their loved ones. Occasionally, Zimmerman drills a cavity into a gemstone, such as a rose quartz, to enclose ashes.

“I think it’s good closure to feel like they are moved out of the deteriorating lost realm that death is,” Zimmerman said of memorial jewelry.

Dunlap’s 0.25 carat diamond was created by a Chicago company using a process that was first pioneered by General Electric in the 1950s, according to the Life Gem Web site. The calcium carbonate from bones in the cremated remains are distilled into graphite, which is then exposed to high pressure and temperatures up to 3,000 degrees Celsius to recreate the earth processes that form natural diamonds.

Roberta Dunlap requested that her remains be scattered in Scotland, a place she and her husband visited some 13 times in recent years. So her husband will eventually set the diamond in a necklace and give it to a Scottish friend, on the condition that if the friend, or her descendants, were to leave Scotland they throw the diamond necklace into a peat bog, Dunlap said.

One Response to “Ashes to ashes, dust to diamonds”