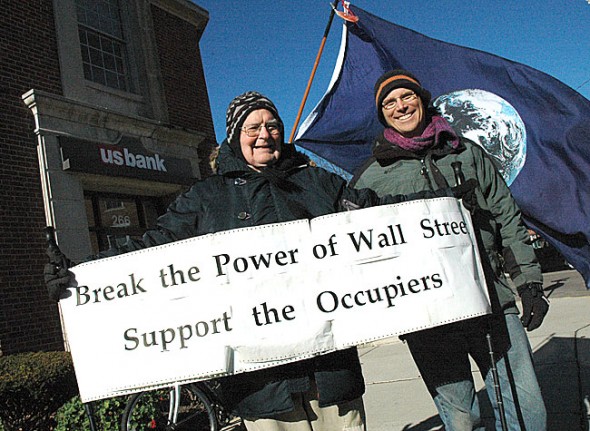 Village resident Eric Wolf, right, organized an Occupy protest in Yellow Springs last Friday in front of US Bank on Xenia Avenue to criticize the bank’s practices. Bill Houston, left, was one of the 34 local people who raised their voice with Wolf to draw attention to wealth disparity and economic injustice in the U.S. (Photo by Megan Bachman)

Money, like religion, politics, and sex, is a sensitive topic of public conversation. But as Occupy Wall Street protesters lambast commercial banks for the subprime mortgage crisis and bank customers express outrage over new account fees, the decision of where to bank has become increasingly public. Last week a handful of villagers sparked that discussion locally by protesting in front of the local branch of US Bank to criticize that company’s practices — and wealth disparity in the United States in general.

Local storyteller Eric Wolf, who orchestrated the protest, targeted US Bank because it’s the fifth-largest commercial bank in the United States, he said, encouraging people to move their deposits to the YS Federal Credit Union because it is member-owned.

“US Bank…is responsible for at least 10 percent of what’s wrong with the economy,” Wolf said at the protest, adding that its CEO took home $18 million last year while many Americans were losing their homes and jobs.

“It seems like Wall Street is right here,” he said.

About 34 people joined the one-day protest over the course of seven hours, Wolf said, and many more stopped by to share their thoughts on the town’s financial institutions — the national US Bank, regional WesBanco and local YS Federal Credit Union.

US Bank spokeswoman Lisa Clark responded this week from her office in Wisconsin that the company did not participate in subprime lending or risky investments and has been doing its part to lend to small businesses and create jobs.

“There’s some anger that’s out there and people are trying to find people to peg it on,” Clark said. “I understand the frustrations of people that are unemployed, and we’ve been trying to do what we can.”

The smallest financial institution in town, the local credit union has recently seen an influx of members, in part a response to two national campaigns, the Move Your Money Project and Bank Transfer Day, and the publicity garnered by Occupy Wall Street.

“We are definitely seeing a response to what you’re seeing in the media,” the credit union’s Chief Operations Officer Sandy Hollenberg said last week. Nationally, credit unions have added 650,000 members and $4.5 billion in new accounts in the month leading up to Bank Transfer Day, Nov. 5, according to the Credit Union National Assocation.

But because the Yellow Springs credit union already had many loyal customers, its growth was less than at many other credit unions, Hollenberg said. Current members are also looking for additional ways to support the credit union, largely by refinancing existing loans from other banks with the credit union.

Credit unions are not-for-profit cooperatives owned by their members. Though they pay property and payroll taxes, they are exempt from federal taxation of their profit, which is instead reinvested in the operation. The local credit union has around 2,700 members, who elect a seven-member board at their annual meeting, typically attended by 20 to 25 members. The current board president is Steven Payne, a local resident.

Being non-profit, the credit union can focus on improving the financial well-being of members instead of making a profit for shareholders, according to Bill Wood, director of the financial service degree program at Wright State University.

Credit unions serve members with a common bond. In the case of the YS Federal Credit Union, formerly called the Yellow Springs Federal Credit Union, this common bond was, since its founding in 1948, the village of Yellow Springs and Miami Township. About seven years ago membership was expanded to anyone who lives, works, worships or attends school in Greene County or whose family member is an existing account holder.

The credit union has grown over the last decade, from $7 million in assets to $15 million today as its membership took advantage of expanded financial services, such as second mortgages and home equity loans. But the credit union, because of its small size, does not make commercial loans, nor does it plan to add that service in the next five years, said its CEO, Karen Wolf.

WesBanco and US Bank do loan to local businesses, in addition to serving consumers and homeowners, and insist that even though they are for-profit, they are community-focused.

US Bank, for example, recently closed a loan to a local business to build a new office in the village, the business’ third office in Greene County, said Clark, who wasn’t able to release the business’ name. Nationally, US Bank has increased its loans to small businesses by 125 percent over the last year and has stepped up its lending to community development organizations, she said. The local office’s branch manager often calls on local businesses to see how the bank can serve them.

“We’re all chipping in together to make sure the economy turns around,” Clark said, adding that large banks will always be needed to finance loans to large companies and facilitate international trade. Other advantages of the large bank are that customers have access to their funds at US Bank’s 3,000 branches throughout the country and more options for online and mobile banking, Clark said.

Chartered as the First National Bank of Cincinnati in 1863, US Bank acquired the local branch in 1975 and established it as a US Bank in 1991. Though the bank has had a high turnover of employees in recent years, Carol Moore has been at the branch for more than 30 years, Clark said. The Village of Yellow Springs uses US Bank for its financial services.

Even though local protesters called out US Bank as a culprit in the subprime mortgage crisis, Clark said that US Bank’s investment and lending practices have always been conservative and that the bank was not involved in risky ventures such as mortgage-backed securities and credit default swaps.

“I think we get unfairly painted because of our name,” Clark said. US Bank did not need federal bailout funds, though they were forced to take the so-called TARP money. The company paid the money back, with interest, at its earliest opportunity, she said.

“We never really got into the subprime lending,” Clark said. “Just look at the strength of our balance sheet.”

WesBanco also avoided risky mortgages and investment schemes, according to WesBanco’s Southwest Ohio President Dave Donaldson. Instead WesBanco is a “plain vanilla boring bank,” that is conservative in its investments and focused on meeting community needs. Though WesBanco does commercial lending, it mainly addresses consumer borrowing and investment needs.

Originally chartered as the Wheeling Dollar Savings and Trust in 1870, the local office of WesBanco opened in 1995 and is a growing branch for the regional company.

“Yellow Springs has been a great community for us because we’re a community bank and it’s a community kind of town,” Donaldson said, adding that WesBanco is a sponsor of Street Fair and other village activities. As opposed to a national bank, WesBanco is able to empower its local employees to be more flexible in lending decisions, he said.

“A national bank runs itself more centrally,” Donaldson said. “We’ve given our employees the tools to get involved in the community and the freedom to take care of their customers.”

Though the local protesters didn’t either criticize or promote WesBanco, Donaldson said it is unfortunate that citizens are attacking commercial banks when it was investment banks that created the high-risk mortgage products propelling the financial collapse.

“I think it’s great they’re opening a dialogue and targeting wealth distribution, I think that’s healthy,” Donaldson said. “I would like to make it clear that community banks and Wall Street are two different things. Goldman Sachs is not US Bank or WesBanco.”

There is a place for commercial banks, Donaldson said. By offering shares, they are an investment option for those with retirement savings, since CD rates are too low to accumulate significant assets, he said. And even though WesBanco works on behalf of its shareholders, WesBanco benefits the public by paying federal taxes on its profits, which credit unions do not.

Though credit unions serve a purpose, as they were chartered to lend community funds to under-served groups, today credit unions have entered the world of commercial banking, Donaldson said.

“In my opinion, credit unions get a bailout everyday,” Donaldson said of their federal tax break. Since commercial banks pay 33 percent of their profits in taxes, the credit union has tax savings that should be more heavily invested in lowering loan interest rates and raising interest rates paid on deposits, he said.

US Bank may have been a backdrop to a protest asking bigger questions about American inequality and injustice. But if the recent uptick in traffic at the local credit union is an indication, villagers are looking more closely at where they deposit their money and take out loans. And even if none of the local institutions were prime offenders in the recent financial crisis, their practices and priorities are under increasing scrutiny.

“We need to withdraw our support from Wall Street and the banks,” said Bill Houston at the protest. “I don’t think of myself as supporting them, but tacitly I do in a thousand ways…and we need to stop that.”

Disclosure: The reporter has deposits at US Bank and the YS Federal Credit Union.