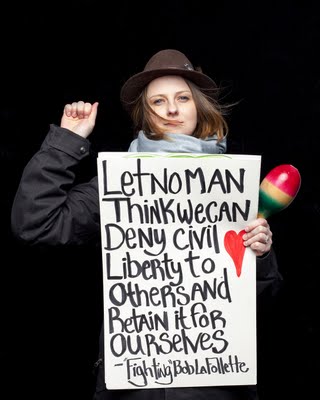 A Wisconsin statehouse protester photographed by Kevin Miyazaki, whose portaits of others who opposed the state’s budget repair bill in early 2011 will appear in a show opening at the Emporium this Saturday, Jan. 7, at 6 p.m.

In the early months of 2011, when thousands of citizens organized en masse at the Wisconsin statehouse to oppose the state budget bill’s attack on public employees, news outlets tended to portray the protesters as a counter-culture anomaly. But according to Wisconsin resident Kevin Miyazaki, who joined the demonstrations in Madison, the protesters were anything but counter to the state’s mainstream culture.

“The fact of the matter was there were tens of thousands of very average Americans, teachers, fire fighters, and a lot of non-union people who care about union workers,” Miyazaki said. “This was a very mainstream Wisconsin crowd, and a lot of people who were not used to protesting in this way.”

So Miyazaki, a photojournalist by trade, decided to record a more accurate picture of the protesters by setting up a portrait studio on the sidewalk and photographing the people who had come to voice their concerns. Set against a black backdrop are simply the faces of an Iraqi war veteran and his partner holding a “Stop the attack on Wisconsin families” sign, a bright-eyed college student, a middle-aged woman wearing a construction helmet, and an elderly woman with a knitted cap and a “Bust Walker” button opposing Wisconsin Governor Scott Walker, who signed the budget repair bill. The photos also include a man wearing a cheese tie and a cheese cap bearing an American flag, a young African-American woman, a mother with four children, a middle-aged man in a wheelchair, and a retired couple holding the sign “still supporting human rights.”

“A big part of the project was to put a face on the people I saw in the crowd,” Miyazaki said in an interview on Tuesday. “I’m very against the governor’s original budget bill that ended collective bargaining for all state workers, and I went [to Madison] to politically oppose the bill. But then I realized there were pictures I could make that reflect the people who are speaking out. It’s a heroic view, very simple, stripping away the environment in a way that celebrates the individual.”

Miyazaki made the portraits in February, and since then, the exhibit has appeared at the University of Wisconsin–Milwaukee, the Portrait Society Gallery in Milwaukee, a Cleveland photo show about unions, and now at the village’s own Emporium, co-owned by Miyazaki’s brother, Kurt Miyazaki. The exhibit opens on Saturday, Jan. 7, with a reception for the artist beginning at 6 p.m. The event includes a wine tasting and music by DJ BobbyLite.

While the family relation didn’t hurt, Kevin Miyazaki is pleased to show his work in Yellow Springs, where he feels the audience will truly understand the photographs. The work has particular significance in Ohio, whose state capital has seen similar protests throughout the year over public worker’s bargaining rights, he said. While Ohio’s Senate Bill 5, which limited workers rights, was overturned by voters in November, Wisconsin’s situation has grown ever more divisive with a movement to recall the governor currently ongoing.

While Miyazaki doesn’t consider himself to be a political activist, he is politically minded and opposes his governor’s conservative politics so strongly that he has decided to use any proceeds from the sale of the protester photographs to benefit United Wisconsin, the organization that is leading the recall effort.

Miyazaki does freelance commercial photography for a living and his photos appear in many of the world’s major magazines and newspapers, including Forbes, Travel + Leisure, Scientific American, Bon Appétit, Der Spiegel, The New York Times and the Wall Street Journal. But his artwork is what drives him to keep taking photos, he said.

He is currently working on another project documenting the history of the structures that housed the Japanese-Americans who were relocated during World War II to camps at Heart Mountain in Wyoming and Tule Lake in California. Miyazaki’s father was interned at both camps, whose barracks after the war were gifted by the U.S. government to homesteaders to encourage farming settlements in what were otherwise fairly desolate areas. As part of this project, Miyazaki created a video featuring both historic and contemporary photos of the Japanese-American families at both camps. In the same spare style as the Wisconsin protester photos, Miyazaki used a black backdrop to photograph the faces of the interns who returned to Heart Mountain last August for the first time for a reunion. The video, which features music by Kurt Miyazaki, will be featured on the AARP Web site this month and next, coinciding with the 70th anniversary of the first Japanese-American internments.

While Miyazaki’s work edges toward the political, his photographs are chiefly humanizing. They help to tell the stories of the people and families whose experiences with their environments and their governments shaped who they became and who their children became after them. If his work increases awareness, it is a reflection of the learning he has been able to gain by listening to the people and the different perspectives they have to share.

As a photographer who is sometimes asked to donate work for fundraisers and charities, in 2009 Miyazaki created an online mechanism by which photographers can donate their work to benefit charities of their own choosing. Collect.giv currently includes photographs by 53 different artists around the country, whose online sales have raised almost $33,000 for charities chosen by the artists.