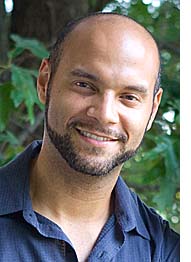 Yellow Springs native Allen McCullough was commissioned to write a piece for string quartet by CMYS, in support of new music by young artists. (Submitted photo)

Like its classical roots, Chamber Music Yellow Springs remains faithful to its mission to bring small, world-class ensembles to perform in the village. But as a group that also aims to build music appreciation within the community and support younger artists, CMYS recently extended a rare invitation for a new work by an artist whose exposure to music growing up in the village delivered him to the life of a composer. The group has commissioned Yellow Springs native Allen McCullough to compose a string quartet to be performed by the Daedalus Quartet during the 2012–13 CMYS season.

Commissions are the means by which most new music is written today, as few composers write on speculation anymore, according to CMYS board president Jeff Huntington. And while CMYS isn’t in the habit of commissioning regularly, the organization does occasionally organize at a grass-roots level to produce new art, particularly art with local ties, Huntington said.

“CMYS likes to support living composers, especially young ones who aren’t yet widely recognized,” Huntington said. “We don’t have a lot of money so we don’t open it up every year, but in the case of someone from Yellow Springs, who has the credentials and whose family was part of what makes the community work, we see him as one of us, and we want to support that.”

The organization is especially eager to work with someone who has heard music in his head for as long as McCullough has. McCullough began playing the piano at age 4, took up the cello in elementary school and started writing his first sonatas in high school. His freshman year at Brown University in 1997 his mother, Sarah McCullough, had the wisdom to nudge him toward a class on the music of Mozart, and that was all it took. McCullough studied composition at the Manhattan School of Music and after earning a PhD from the University of Pennsylvania, became the chair of the music department at Mercer University’s Townsend School of Music in Macon, Georgia.

McCullough, who describes himself as a neo-romantic composer, approaches new music with an openness to new rhythms and harmonies with a heavy dose of respect for the past. For the commissioned work, which he has already begun, McCullough had the idea to portray the evolution and maturation process of a musical ensemble. The music itself includes some irrational meter, or music with an unusual number of beats per measure. The change in tempo is meant to reflect the fun interplay and mimetic exchange that an ensemble experiences, but it also requires that the group be extremely cohesive and communicate well in order to play the music.

McCullough has faith that the Daedalus Quartet is the right group for his work. He first met and spoke to the members of the ensemble in 2002, when he happened to be home from school to attend the CMYS competition they won. They met again when as a quartet in residence at Penn, the Daedalus read some of McCullough’s student work and liked it. That is utlimately the reason an ensemble chooses to accept a commission, according to Robert Besen, who represents the Daedalus Quartet.

“There’s a chance aspect to it, and you never can know until it comes out, but the bottom line is that [the group] like the music that the composer writes,” he said. “This project is a fun story that speaks to a lot of how music happens.”

While the commission has only recently been arranged, McCullough’s work is not long from the stage in Yellow Springs. The Harlem Quartet, which will appear in the village in March as part of this year’s CMYS season, will also give a second concert sponsored by Antioch College and featuring a movement from McCullough’s string quartet No. 1. The Harlem Quartet will perform at Antioch’s Herndon Gallery on Saturday, March 17, beginning at 7:30 p.m. Then as part of the CMYS regular season, the ensemble will give another concert the following evening, Sunday, March 18, at 7:30 p.m. at the First Presbyterian Church.

McCullough wrote the third and final movement of the quartet in memory of his mother, who died in 2001. Sarah McCullough served as a trustee and competition judge for CMYS, a village school board member, the accompanist for the Yellow Springs Community Chorus and a longtime piano teacher in the village. Her husband, Bill McCullough, also deceased, was the Greene County Health Commissioner and also served the schools as a coach and mentor in the 1980s. Their service to the village is meaningful to the CMYS group, which is beholden to many active community members who have kept the organization running strong for 28 years, according to Huntington.

The Harlem Quartet that is coming to Antioch is also somewhat connected to the village through its founder, the Sphinx Organization, whose advisory board includes Matthew Derr, the former interim president of the college. The Harlem Quartet is dedicated to supporting African-American and Latino classical musicians, a value not unlike the one the college serves for diversity and equality. The Harlem performance at Antioch will also include pieces by Wynton Marsalis and Joaquin Turina.

Funding for the Antioch concert is being met by both the college and CMYS. As for next year’s commission, CMYS has some money available, but is also looking for a grant from the National Endowment for the Arts, which must be matched at some level by local endowments and private donors, Huntington said. Supporting new music is always more costly, but CMYS has in the past found funding for three other commissions, one by Rick Sowash in 1989 in memory of local resident Louise Betcher, a brass quintet called “Fanfare for Yellow Springs” and a 2008 work by Yellow Springs native Drew Hemenger for the Vogler Quartet. The organization finds its extra efforts are worth the trouble, mostly because of the benefit to the community it serves.

“We want to support people when they need us — once they’ve won the Nobel Prize they don’t really need our support,” Huntington said. “We want people to know that if you’re from Yellow Springs and are part of the community, we recognize that and want to support you back.”