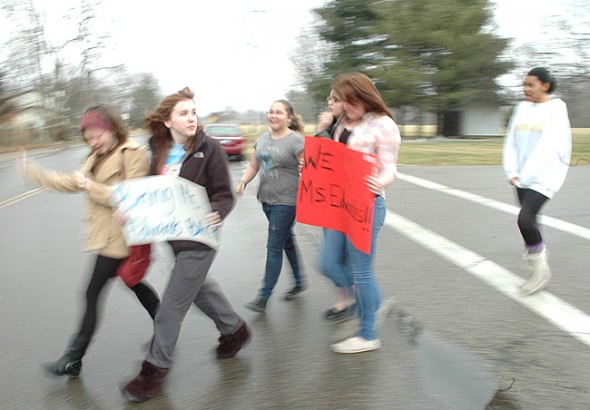 Yellow Springs High School students walked out of class last Wednesday, Feb. 8, in protest of the removal of their chemistry teacher from school. District Superintendent Mario Basora came to the school to field questions from students. (Photo by Lauren Heaton)

About 80 Yellow Springs High School students walked out of school last week in protest of the school administration’s decision to place a high school teacher on administrative leave.

According to District Superintendent Mario Basora, chemistry teacher Michelle Edwards was placed on paid administrative leave after school on Friday, Feb. 3, due to issues that have been ongoing for several years. He told students that in order to protect the privacy of those involved, he could not give reasons for Edwards’ absence and did not know when or if she would return.

At 1 p.m. on Wednesday, Feb. 8, students stood outside in the snow to voice anger and disappointment that a teacher they deeply respect had been removed from class in the middle of the year without warning or apparent cause. Many wanted to know why.

“If they’re making a decision that directly affects students in this way, we should at least know why,” chemistry student Henry Crews said in an interview during last week’s walk-out.

“She was literally my favorite teacher — she’s really nice, but she’s absolutely one of the best teachers at the school,” chemistry student Tommy Simonson said during the walk-out.

Senior Eli Mulhall said he felt the action had set a precedent that made some of the other teachers nervous. Paige Evans agreed.

“I feel a lot of teachers are frightened to teach in the traditional manner that made our high school great — the wonderful connection students have to teachers and faculty,” she said.

Basora, YSHS Principal Tim Krier and YSHS Guidance Counselor Dave Smith spoke with students outside for nearly 45 minutes before moving the discussion into the cafeteria for over an hour more. They encouraged “respectful dialogue” over an issue the students clearly care about, according to Basora.

As of Tuesday, Feb. 14, the superintendent had not yet made a recommendation regarding Edwards to the school board, which gives final approval of decisions involving personnel contracts, Basora said. The school board will hold a special meeting in executive session today, Feb. 16, 9 a.m. at Mills Lawn to discuss a personnel matter.

Edwards has been disciplined twice since coming to Yellow Springs schools in 2007. According to her personnel file, which was requested last week from the board of education office, in the spring of 2010 Edwards was asked to meet with the high school principal, several students and several parents regarding behavior the principal characterized as “demonstrating a lack of professionalism and decorum.” While no disciplinary action was taken at the time, in October 2010 Edwards was suspended without pay for five days for ongoing evidence of unprofessional behavior both in and outside the classroom, such as gossiping and texting late at night with students about non-academic issues. The suspension was later modified in negotiation with the teachers union, Yellow Springs Education Association, to three days without pay.

The following spring 2011, Edwards was again suspended for five days without pay (later modified to one day without pay) for “unprofessional conduct” with another teacher. The most recent incident was marked by a Feb. 1, 2012 disciplinary hearing regarding an assertion that Edwards disobeyed a directive from the principal during an AP chemistry class the previous month.

Any time disciplinary action is taken against a school employee, the district establishes a plan for improvement, often including regular meetings with mentors and supervisors and specific strategies for professional development, Basora said. According to Edwards’ file, an improvement plan was established in the spring of 2011 that included a process for improvement and evidence to assess the progress being made.

Prior to the first disciplinary action in 2011, Edwards had received positive evaluations in all areas of performance, including planning, class climate and class management. According to her file, she was described as “devoted to meeting her teaching and other professional responsibilities,” “[exercising] emotional control when faced with difficult situations,” and having a “good connection with students…[who] understand and know that she is a caring and concerned teacher.”

The success Edwards achieved in the classroom was evidenced at last week’s school board meeting, during which four seniors spoke passionately about the personal support and high quality education they felt they got from her.

“One reason I took AP chemistry last year was so I could have Ms. Edwards two periods in a row ­— she makes learning fun, and the way she does it works,” Robyn Weigand told the board on Thursday. “Not being able to see her five days a week, it’s heartbreaking.”

“It cut us back a lot not having Ms. Edwards here… we all believe Ms. Edwards is a great teacher,” Maryah Martin said.

“Ms. Edwards is an extraordinary, absolutely exceptional teacher…we deserve to have quality teachers, we shouldn’t have to fight for our education,” Zyna Bakari said. “To me it’s so obvious that what you’re doing is wrong — you’re taking away our education for something so petty.”

Parent and YSHS teacher Elizabeth Lutz also spoke at the meeting in support of teachers’ need to be able to express their individual personalities without being pressured to conform to too narrow a mold.

“In order to be someone kids can learn from, you have to be someone kids relate to,” Lutz said. “There was a time when teachers could be characters, and as long as kids were learning, there was room for personality and imperfection.”

She also spoke about both the benefits and challenges of living in a small community, where teachers and students can have closer relationships but where gossip spreads quickly and can become a form of bullying.

“It’s not easy living in this town — you cannot teach these children and not forge relationships with them,” she said. “You have to allow people to be themselves, live their lives and be human.”

Currently Edwards’ five chemistry courses, including physical science, general chemistry, two sections of chemistry, and AP chemistry, are being taught by substitute teacher Rebecca Fitch. According to Basora, Fitch has helped coordinate the Mills Lawn After School program and has a background in biology and chemistry and extensive experience leading youth at a wilderness camp her family owns. Currently Fitch is doing her best to help students keep up with the lesson plans for each class and trying to find ways to support those preparing for the AP exam they will take later in the year.

According to Basora, if the contract of an existing teacher is not reinstated, the district can hire a new teacher as long as no appeals are pending, but the district is prohibited from filling a position that is under appeal. While no recommendation had been made to the board as of Tuesday, and no disciplinary action had been taken against Edwards, the ultimate decision to either suspend or terminate an employee’s contract lies with the school board, Basora said.