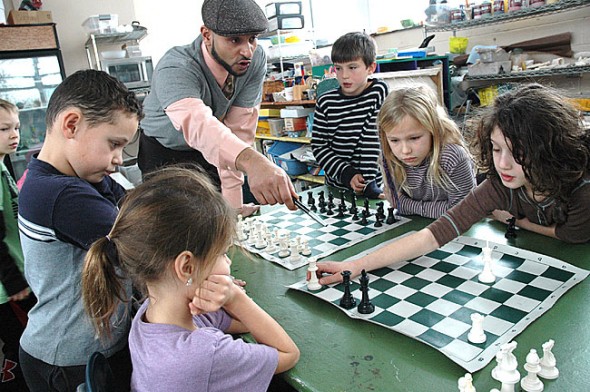 With chess, thinking and fun unite

A game of chess is like “a mind martial arts,” according to Kaden Boutis of the Antioch School’s Older Group. To Zenya Miyazaki, chess “exercises your brain. It makes you expand your thinking.” And to Sulayman Chappelle, chess is an opportunity to see how people think differently, how “everyone has a different strategy.”

These Older Group boys began lobbying about a year ago to make chess the focus of the school’s annual artist-in-residency, according to OG Teacher Chris Powell. Specifically, the boys wanted to bring to school instructor Omar Durrani to teach chess to Antioch School kids during the annual Emily Bailey arts residency. And that’s exactly what happened, with Durrani wrapping up his three-week residency on Friday, Jan. 20.

During that time, chess fever took over the school, Powell said. In fact, kids spent so much playing chess that, on Durrani’s request, teachers limited their access to the game so they’d be “fresh” when he came in each day, and the children “reluctantly cooperated,” Powell said. But during the final week of the residency, the teachers and Durrani gave in, and chess ruled the school.

Choosing an arts focus based on the interests of the children is very much in keeping with the Antioch School philosophy, Powell said.

“The premise of the Antioch School is that learning comes through children’s own interests,” she said. “It’s empowering for them to run with what they’re passionate about, and creates an atmosphere of joy and challenge.”

An atmosphere of joy seemed evident last Friday in the school’s art/science room, as Durrani organized the Older and Younger Group students into evenly-matched pairs (Jindalee vs. William, Lida vs. Marin, Ryan vs. Samantha, and Miles vs. Kaden, among others) for the residency’s final tournament.

“Why do we play chess?” he called out to the group as the tournament began.

“Because it’s fun,” they called back, with enthusiasm. The kids then gathered around the boards, intensely focused on controlling the center, protecting their king and ultimately delivering a “check-mate” to their opponent.

But while emphasizing that chess is a game, Durrani also reminded the kids that this game is all about thinking. For instance, the “number one question” to ask after an opponent’s move is, “Why?” as each player tries to figure out their opponent’s strategy. And it’s also important to remember that “plans are always changing in chess,” so that the player needs to be flexible enough to change strategy with each move.

The focus on strategy is one benefit of the chess residency, according to Antioch School Art and Science teacher Brian Brogan.

“I think it’s good practice in problem-solving,” Brogan said. “And in chess, kids have to think ahead, to focus beyond the immediate” which is not something they’re usually called upon to do.

Brogan also appreciated Durrani’s emphasis on sportsmanship, and how he insists that opponents shake hands after each game. And he recalled the chess games of his own childhood, which were played only by boys. At the Antioch School, girls are equal chess partners, and “they feel empowered,” he said.

About half of the children already knew how to play chess before the residency, according to Powell, and all seemed excited to improve their skills. Some students were more skilled than others, but one of the lessons of the game is that, if you play with someone who is more skilled, your own level of skill will rise, according to Powell.

“You have an opportunity to grow,” she said.

As is often the case at the Antioch School, the students and teachers find ways to integrate the arts focus into other areas of learning. For instance, Older Group members will complete a research paper on some aspect of the history of chess, and several students have created chess-oriented art projects, such as a mobile of paper chess pieces, and a chess pawn made from knitting.

While the residency is now over, chances are good that Antioch School students will find ways to keep playing, whether at home, at school or at the Emporium downtown, where some of the older boys bring their own boards and hunker down after school.

“Chess is fun because there are so many ways to win, not just one way like most games,” said Older Grouper Miles Sturm. “There are so many different options. ­Billions.”

Doing an arts residency at the Antioch School was an honor, Durrani said, thanking teachers Powell, Brogan and Linda Greene for their help, along with filmmakers Steve Bognar and Liz Cambron, who are making a documentary about the residency. He hopes to do more school residencies through his business, Mr. Durrani’s Chess Academy, or MOCA, and can be contacted via e-mail at durranio11@gmail.com .