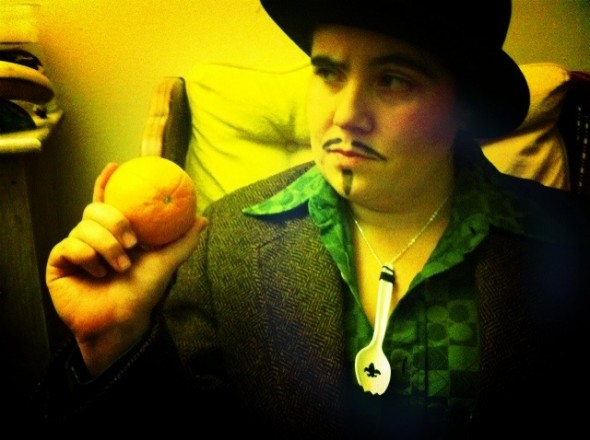 Be a good spork: from filling station to fabulous

Jewelry lovers, rejoice! When it comes to personal adornment, there are some new wares in town.

Tableware, to be precise.

New villager Francois Demitasse is in the process of opening a store that deals primarily in the sale of jewelry made from sporks. A grand opening of his new shop, You-Tinsel, will be held today, Sunday, April 1.

“I’ve always been enamored of the spork’s dynamic personality,” says Demitasse. “The juxtaposition of the curve against the tine; the soft against the harsh. It’s fascinating. Plus, I really like a good, chunky soup, so it helps there, too.”

Demitasse first became interested in sporks when he was in college, working the late shift at 7-11. “Sporks were all we offered to customers, as far as utensils go. At first it frustrated me. Who was 7-11 to play god with the working man’s eating experience? But the more I observed their clean, efficient design, the more I came to believe that this was man’s greatest invention.”

It wasn’t until moving to Yellow Springs that Demitasse was inspired to turn his devotion into art. “I saw there were some shops in town that specialized in spoon and fork jewelry, and I was impressed, but also invigorated,” he says. “It just seemed to click. Like destiny, you know?”

When asked how he thinks his new venture will fare against the already established shops in town, Demitasse is quick to demur. “Oh, I don’t see You-Tinsel as being in competition. Those stores are great. But I see my work as more for those who aren’t sure if they’re a fork person or a spoon person. Sporks are for those who want the best of both worlds.”

One issue Demitasse mentions is that sporks are overwhelmingly made of plastic.”It’s not ideal,” he says, “but you work with what you’ve got. Look, I don’t make the rules. I’m not the one who relegated the spork to second-class citizenship amongst culinary implements. So maybe spork jewelry isn’t as ‘classy’ or ‘artistic’ or ‘durable’ as jewelry made from silverware. But I think people will see it for what it really is: practicality on a chain. Names engraved for $5 extra.”

One thing Demitasse’s new venture certainly has going for it: low overhead cost.

“When I run out of materials,” he says, “I can just run down to the gas station and load up on more.”