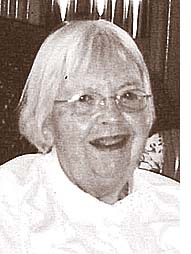 Ruth Elizabeth Gribble Varner died at her home in Yellow Springs on April 14 after a brief illness. She was 94 years old.

Ruth was born on Dec. 26, 1917, at “The Cedars,” the 1829 homestead of her great-great grandparents, in Palmer Township, Washington County, to Jean Lake and Alma Morris Gribble. Ruth did not attend first grade because there were no other children of school age in her neighborhood. Her mother was her first teacher. The next year, Ruth and her sister Mary attended a one-room school. Mary was old enough for first grade and Ruth was ready for second grade. In 1936, Ruth graduated from Barlow Rural High School and then attended Ohio University to get her two-year teaching certificate. Ruth began teaching primary grades in a two-room school in Barlow, Ohio. She briefly taught kindergarten in Yellow Springs. In 1971, she completed her bachelors degree in education at Wright State University while teaching at Four Oaks School in Xenia. Ruth taught 18 years at Four Oaks, serving as principal her last year.

During WWII, Ruth and her husband, Guy, moved to the Yellow Springs area to work at Wright Patterson Air Force Base. She became an active volunteer for 4-H, PTA, Cub Scouts, Yellow Springs United Methodist Church, Friendly Gardeners and the Clifton Old Timers Club. She was a 75-year member of the Marietta Chapter of the Order of Eastern Star. Her activities reflected her love of the outdoors, children and her strong, quiet faith.

Ruth was a prolific writer. She loved to write stories about her family and childhood, wrote frequent and interesting letters to friends, her children and grandchildren. She loved researching family history and corresponded with many of her fellow genealogists. Ruth was a conservationist and naturalist, following her parents’ commitment to be respectful of the earth. She was an avid birdwatcher, gardener and hiker. She was an early member of the Glen Helen Association and the Nature Conservancy. As a member of Tecumseh Land Trust, she donated an easement on her little farm.