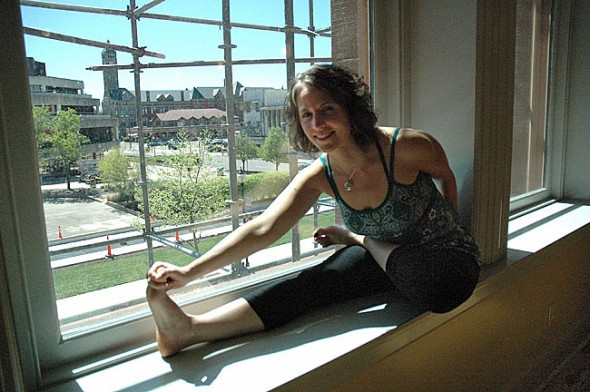 Starting its eighth year, Yoga Springs is expanding into Springfield, with a new studio in the Bushnell building downtown. Shown above in the studio is business owner Monica Hasek. Yoga Springs is offering free yoga classes on the hour at its Springfield studio this Saturday, April 14, as a grand opening event. (Photo by Lauren Heaton)

Yoga Springs is now 8 years old and stretching out into a new old space at the heart of downtown Springfield. While the local studio has opened the village to a lot of strengthening, balance and deep breathing, owner Monica Hasek felt ready to offer those same tools to the wider community. And when Springfield’s newly renovated, historic Bushnell building came calling, she could hardly refuse.

“Springfield came to us, and there was no saying no,” she said.

The new studio will open its doors for a grand opening this Saturday, April 14, from 9 a.m. to 2 p.m. The studio will offer free classes on the hour, with a schedule available at http://www.yogasprings.com. The building is located at 14 East Main Street, and has its own parking garage, which Bushnell building patrons can use free of charge with a pass from the business.

The invitation to Springfield came organically. Feeling that the studio had sufficiently saturated the local community with yoga pracititioners, Hasek had begun looking for a second studio space in the region. Because Yoga Springs is one of just three dedicated yoga studios in the Miami Valley, it draws patrons from Xenia, Fairborn, Beavercreek and Springfield. Dottie Clark, one of the Springfield yogis, recently leased some of the office space in the Bushnell building for her Ayurvedic medicine practice and thought a yoga studio next door would complement her practice.

Bushnell property owner Jim Lagos agreed. In 2010 Lagos, who is related to Brown apartment owner Tina Lagos, used a $5 million Jobs Ready Site Grant to complete a $10 million renovation of the 175,000-square-foot building, according to the Springfield News-Sun. Named after two-term Ohio governor Asa Bushnell, who built the structure in 1893, the building was designed by the firm Shipley, Rutan and Coolidge, who designed the Chicago Art Institute and library, and was considered worth not just saving but rebuilding as a LEEDS Platinum certified structure.

As it happens, before coming to yoga, Hasek worked as a commercial designer and had the expertise to design her own studio. Hasek gave six months of professional advice, and got a clean, modern, energy efficient new studio overlooking city fountains on an even trade.

“This has been really a gift,” Hasek said. “We have been asked to be here, and they have made it possible for us.”

For now, the new studio will be open Tuesday through Saturday, with a few classes each day. The Yellow Springs location will continue to host the majority of the week’s schedule. The two locations will help the studio utilize all of its 18 teachers, the majority of whom Hasek has trained in the studio’s teacher training program and certified through the National Yoga Alliance.

At close to 3,000 square feet, the Springfield space is about a third larger than the one in the village, and it can accommodate larger events, such as the teacher training classes or the master teacher workshops, like the one Yoga Springs hosted last weekend for Lynne Minton. The expansion has inspired the studio to plan an advanced 500-hour teacher training program with Minton, who is tentatively scheduled to come for eight five-day residencies over the next two years to teach high level yoga.

“We’ve been wanting to do an official 500-hour program, and with the new studio, we figured why not really elevate our teaching?” said Hasek, whose husband Robert Hasek (Yellow Springs News co-owner and advertising manager) also teaches yoga and helps with the business. “To offer this quality program in Ohio is amazing, and a lot of our teachers are really excited.”

Being in the heart of Springfield, the studio is also near Wittenberg University, the art museum and several theaters and restaurants, and Hasek hopes to become more a part of the city’s culturescape by hosting art openings and “after hours” events with surrounding businesses. The lioness gargoyles on the roof of the building speak to the city’s glamorous past, when the downtown was bustling and the Bushnell was a commercial center with Wren’s department store as an anchor.

“People in Springfield have an interest in revitalizing this community, and I love the idea of being a part of bringing the downtown back,” Hasek said. “You walk around and it’s like, wow, there’s people downtown! It’s fun to be a part of.”