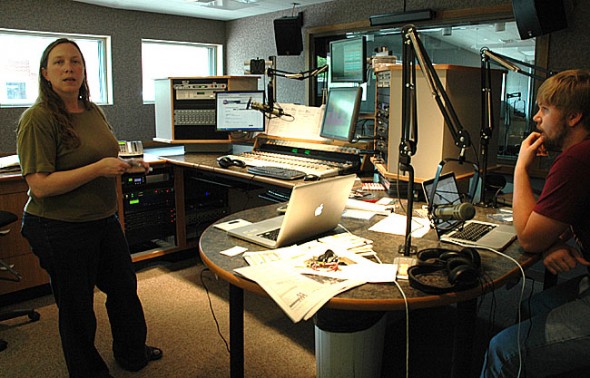 WYSO music director Niki Dakota hosted her music program “Excursions” last Friday while intern Kent Montgomery looked on from the second of three mics in the station’s new and roomy air studio in the Kettering building. (Photo by Lauren Heaton)

WYSO to build up local capacity

On Friday last week at the new WYSO radio studio, the “on air” sign was lit and music director Niki Dakota was swaying in front of an array of switch boards and computer towers. “Member supported WYSO is a service of Antioch University for the Miami Valley. The time is 1 o’clock,” she said, ripping three switches with the follow through of a drummer to end her show “Excursions” for the day.

“I’ve been looking for reasons to be grumpy, but I just can’t,” she said. “I love my job!”

Dakota loved her job before WYSO made its big move across the street last Tuesday from the Sontag-Fels building owned by Antioch College to the ground floor of the Kettering building, which was vacated over the winter when the university administrative staff moved across town to the Creative Memories building. But with a $1 million renovation for new studios and expanded office space and $126,000 in broadcasting equipment upgrades, the job of growing the 91.3 FM public radio station just got a whole lot easier. “This was really a momentous move,” Dakota said last week. “That the university recognized and valued what we do here at this community radio station — it makes me want to cry. I feel so lucky.”

WYSO has moved just three times since its first broadcast as an Antioch College radio station in 1958, when it was housed in the northeast corner of the student union. The station moved to the Fels building in 1995, and went from being a mostly Yellow Springs station to its current capacity serving a nine-county area and broadcasting not just national programs but local news, commentary and DJed programs. But operating from the basement of the aging and largely vacant Fels building was a challenge, WYSO Station Manager Neenah Ellis said. The building, vacated by Antioch University Midwest (then called Antioch McGregor) in 2007, has long had plumbing and HVAC issues, which caused secondary problems such as mold and temperature fluctuations. In addition, the old production and sound recording space was limited.

The remodeled space in the southwest corner of the Kettering building offers three times the production space, including a new master studio and one for backup, three production booths and a live performance space with ample room for an audience. The recent investment also includes a new transmitter to pump up the station’s signal from 37,000 watts to 50,000 watts, which while it won’t increase the broadcast area, will improve the quality of the signal, especially at the fringe of the coverage area. The station also got a new satellite dish for better reception of syndicated programs and other equipment to facilitate the production process. The rest of the ground floor allows for expanded office spaces for WYSO’s eight full-time and three part-time staff members and dozens of volunteers. Last week WYSO staff members Sarah Buckingham and Juliet Fromholt were helping to move boxes of CDs into the new music library and digitizing room, where the station will eventually open its archives to the public.

Overall, Ellis said in an interview last week, the move will accommodate growth for the station, especially in the area of local programming, which listeners around the Miami Valley have said they want more of in their local station.

“To me it’s not an either/or — I think we can do both [national and local programming] and do both very well,” Ellis said. “WYSO has an incredible tradition here since it started, of telling local stories,” and along with some grant funding, the station plans to use the new studio “to help us step up to the next level with more community programming and training.”

Currently WYSO has 12 locally produced shows, including news director Emily McCord’s “Politics Ohio,” “The Book Nook with Vick Mickunas,” music programs such as “Kaleidoscope” with Fromholt and “Midnight Ramble” with Tom Duffy, and commentary such as “Filmically Perfect” with Dakota, J. Todd Anderson and George Willeman. And the station is positioning itself to do more. Last year WYSO launched Community Voices to train people at the studio with the writing, editing, recording and announcing skills needed to produce a radio program. Over the winter WYSO received a $100,000 Localore project grant to partner with local media producers Steve Bognar and Julia Reichert to cover the post-recession stories of the people of Dayton. And this year the station is working with Antioch University to create a pilot for an online media production course for its students.

“The idea is, who doesn’t need some kind of media training these days? No matter what you’re doing, you need to understand this vocabulary and the potential of using these tools,” Ellis said. “We’re starting with radio because that’s what we know…but the long-range goal is to become a media training center.”

The reason for training more people in production is to get those who live in the community to tell the stories of that community. They are the ones who know it best, and listeners like hearing from them, Ellis believes.

“People like hearing the local voices, and they’re very, very unhappy about taking local stuff off the air,” Ellis said. “So now we have the staff and the space, and we’re trying to grow the resources” to achieve that goal.

While the university, which owns WYSO, covered the cost of the move and some of the equipment upgrades (which the station did not have to ask its listeners to support), the station will need to cover an increase in annual operating costs in the new space, which are expected to reach between $70,000 and $100,000, part of which will be borne by the university that still uses the upper floors for records storage. The bulk of the cost will need to come from station revenues, Ellis said. Those revenues are currently looking positive, with membership on the rise and audience numbers growing modestly in all age groups.

“We’re not making a huge budgetary leap, but we’re assuming more of the basic operating costs of the building,” she said.

With Congress threatening to cut the public broadcasting funds that support WYSO, the station must be prepared to replace lost revenue, Ellis said. The station has raised $400,000 in local, state and federal grants since Ellis joined the station in 2009, and this summer WYSO hired development director Luke Dennis to help leverage more support. The station launched a fundraising feasibility study this spring and hopes to know more by June about how much it could raise, given the station’s reach.

For now, the move has been a big shot in the arm toward growing capacity. At noon on Tuesday last week, the station organized a parade across the street with Dakota, who was on the air when the station’s signal switched from the old building to the new one.

“For us it was a momentous occasion and a big milestone — it’s something we’re all going to remember,” Ellis said. “To me it’s like a page turned in the history of WYSO. We’ve got the infrastructure now, and from here it’s about making progress and training people.”