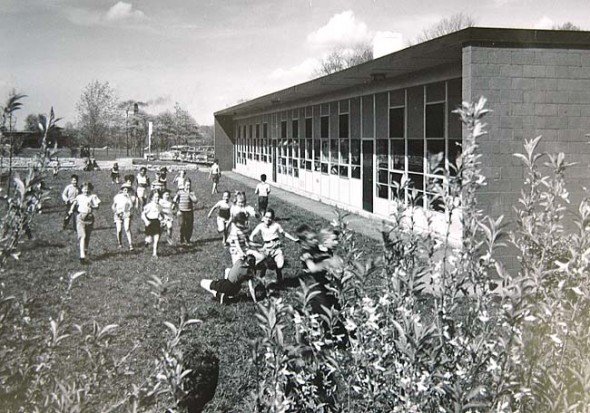 Students were ecstatic to be out on the golf course side of the the new Antioch School around when it was built in 1953. The school will celebrate its 90th anniversary with an open house reunion on Saturday, July 7, noon–4 p.m. at the school. (Photo courtesy of Antiochiana, Antioch College)

Antioch School 90th anniversary— A school that runs like a family

Though 89 and nearly blind, Elsie Hevelin remembers clearly the tall front pillars and marble fireplaces in each room of Judge Mills house where she attended the Antioch School as a child. She recalls the goats, ducks and rabbits the children cared for on the school farm and the pride she felt that it was the children who ran the school.

“We started every day with a group meeting, and we were given a pencil and paper and told to use it during the meeting to draw pictures or write stories,” she said. “We met to decide what we were going to do that day at school.”

Hevelin spent first through sixth grade at the Antioch School, established by Antioch College President Arthur Morgan in 1921 as an experimental lab for teachers coming out of the Antioch College education department. She loved the self-directed, experiential education she received and felt that it produced in her an engaged and self-directed adult. She eventually became a teacher herself and incorporated much of the Antioch approach into her classrooms in the Jefferson school district in Dayton.

“I’m a firm believer in teaching kids exactly what they want to learn — because it works!” she said in an interview this week.

It is perhaps because it works that the school is able to celebrate its 90th anniversary and alumni reunion on Saturday, July 7, noon–4 p.m. at the school. The event is an open house celebration and will include a documented story-telling spot for sharing memories. Alumni are asked to contact School Manager M.J. Richlen with contact information and years of attendance at mj@antiochschool.org or 767-7642.

What was special about the Antioch School when it began is still what endears the school to those who go there today. Current parent Heather Sage (herself a public school administrator) was heartened when she first walked into the school to see instead of desks and chairs, work stations, couches and bean bags. And she knew from the first conversation with nursery school teacher Ann Guthrie about the early focus on social, emotional and communication skills and learning through play, that she wanted to enroll her son, Luka.

“Communication, that’s the foundation of human kind — what is it to be a human being,” she said. When her husband Tony learned the philosophy there, he was “hooked” too. And the family wasn’t disappointed.

Luka was supported from his first year at school to voice when he felt uncomfortable and needed to call for a meeting to discuss an issue with another student. He walked in the Glen every Monday to take the temperature of the air and water and journaled about it each week. And Luka loves going to school, and often gets confused when he hears or reads references to children who are unhappy about going to school, Sage said.

Former student Miriam Barcus also loved going to the Antioch School, and got especially excited about the plays the students wrote, directed, designed and performed each year. Students became very competent in dealing with their own conflicts because they were encouraged to talk through their misunderstandings, and really listen to how the other was feeling, she said.

“It allowed us to step back and consider the other side, to see factors we may not be seeing,” she said. “It was the beginning of critical thinking and seeking deeper knowledge… it allowed the moment of conflict to open doors to greater understanding.”

While the school has never been licensed and therefore maintained its experimental, fluid character, its core commitment to the child has not changed. According to an early school catalog, the curriculum was to be “moulded…to suit the children’s needs, rather than forcing them to fit a rigid and artificial curriculum.” Children were encouraged to progress at their own rate without grades and evaluated through conferences.

In the beginning, the school taught all 12 grades in the former mansion of Judge William Mills on the 10 acres now known as Mills Lawn, according to the school’s history. In 1929, the junior high and high school divisions were dropped (the older students began attending the new Bryan High), and in 1953 the school moved into the current Corry Street building designed by Max Mercer.

According to the history, teachers were always encouraged to explore new teaching methods and design their own learning experiences for and with their students, practices former teacher Bev Price remembers well. Price came in 1963, along with Bill Mullins, both of whom were from the University of Iowa and two of the first teachers not trained at Antioch College. Price had been teaching for 10 years and had already been doing literally “off the wall” things such as unscrewing the desks from the floors, giving students homework with the answers and ignoring the common practice of forming lines.

“I was uncomfortable with the way things were,” she said of the establishment. “I couldn’t be with children in that way.”

So when she came to Yellow Springs she was excited to learn there was a school where she could feel comfortable being an authentic person with her students, where she could flex the curriculum around their individual needs and allow one of her students, for example, to learn to read sitting in a corner with headphones and the libretto to the Jesus Christ Superstar musical. They learned to deal with numbers by piling dandelions into squares of 10 and physically manipulating Cuisenaire rods like abacus boards, and they did their science in the Glen by the tadpole pool.

It was during Price’s tenure from 1963 to 1995 that the college gave up control of the school and alumni assumed complete financial responsibility. The group formed a board of trustees made of teachers, parents and one community member, plus a business manager, which is how it still operates today. And though especially without the college’s support, the tuition-based school struggled financially, it was okay with Price, who knew “we weren’t in it for the money.”

The school, which currently includes a nursery program, a kindergarten, a younger group and an older group up to sixth grade, has always provided scholarships for families who needed assistance. And after some recent fundraising success, the school is now changing its scholarship structure to broaden the availability of aid to more families than ever, according to Sage, who is the current board president.

Over the past three years, through a combination of donations and local grant money, the school has been able to replace its roof, repave the driveway and install new flooring and energy efficient windows. According to Sage, the school is currently developing a strategic plan and has hired Beth Bridgeman as its first development director. The goal is to become less dependent on tuition and to reach out to the larger community of alumni and community members who recognize the value of the Antioch School and want to help it thrive, Sage said.

According to Price, the children have recognized that the school is special and they feel very much a part of it. It was a student who first voiced it to her when they went on a class camping trip at John Bryan. With them was her dog, Sugarbush, who came to school with her every day and was part of their class. When a ranger came by and told them dogs weren’t allowed in the park and Sugar would have to go home, one of the older students spoke up.

“But you don’t understand. She’s part of our family!”

“That’s what we try to do at the Antioch School, have the children understand that problems are to be solved… that everything can be figured out in a way that we can all live together again — as a family,” Price said.