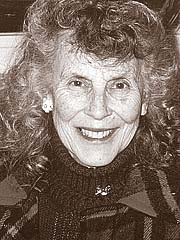 A brief obituary for Mary E. Morgan in last week’s News contended that her influence for good in the community was far from over, and that it would be perpetuated by all who knew her, loved her and, in turn, enjoyed her love.

On Nov. 12 1922, only four years after the end of WWI, Mary was born as the second child of Jacob and Anna Schneider in the small, predominantly Swedish town of Galva, Ill. Mary’s parents were children of second-generation German immigrants. They had moved to Galva from rural Iowa and quickly immersed themselves in the community.

Many of Mary’s lifetime interests were fostered at a remarkably early age. By six or seven years of age, she was printing and distributing handbills soliciting votes for her father, an extremely popular local supporter of public service issues. Soon, she was teaching Sunday school at the Galva Congregational Church and leading story-telling sessions at the library. In high school, she was a finalist in the Illinois State Declamatory Contest.

In the fall of 1940, Mary hit the campus of Cornell College in Mt. Vernon, Iowa, like a whirlwind — emerging four years later, at an even faster speed, as Phi Beta Kappa and the “most likely to succeed” distinction by her classmates.

In late 1944, tragedy struck her family. Loretta Jean, her beloved sister, died 10 days after the birth of her first child. Death was due to tetanus following a caesarean delivery.

Mary’s first professional employment was teaching third grade in Fairbault, Minn., a school system highly respected by Mary’s professors at Cornell College. In later years, the joke among those who knew her students was that, when they graduated from high school, they were still outstanding in all facets of social studies — and rather disinterested in math.

Mary’s second professional position was teaching third grade in Winnetka, Ill., perhaps the most prestigious educational system in the nation at that time. While there, she started taking courses for a masters degree in education at Northwestern University in Evanston, Ill. There, she met her future husband; they were married on Dec. 20, 1947.

In 1951, Mary and Ross moved to Yellow Springs, where they have lived ever since, except for brief excursions to Xenia in the early 1950s, due to limited availability of housing in Yellow Springs at that time.

While Mary’s interests and energy always seemed endless, her focus was her family. She mothered eight children, five by birth and three “by selection” (by foster parenting over 50 years), but all with profound skill and love. She energetically supported school activities from “home room mother” to music, theater and athletic programs. She had a special interest in high school cross-country events, and was greatly pleased by a medal the team gave her one year as their “manager” in appreciation and admiration of her enthusiastic support.

For over 50 years, Mary actively participated in the Religious Education Committee of the Friends Meeting, and served as the focal person for holiday programs, especially the Christmas Eve program.

Mary and Ross had 18 grandchildren and 17 great-grandchildren, with two more expected soon.

A memorial service for Mary is planned for Sept. 2 at 4 p.m., the Sunday before Labor Day. The site is pending. Until then, and also after, Mary’s family repeats Mary’s prayer for everyone: “Be of good cheer, seek wisdom, promote fellowship, and love always.”

Even those who knew Mary well will be well-served to be reminded that attention to her activities and intensity can distract one from what really made her “tick.” Her driving force was her deep, spiritually-based empathy for people — an ever-abiding love of people. That is the secret, the challenge, the joy, the reward in perpetuating her spirit.