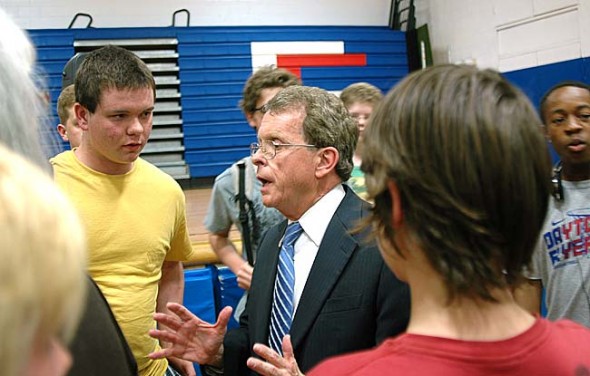 Ohio Attorney General Mike DeWine told Yellow Springs High School and McKinney School students to be independent thinkers and sparred with them over the gay marriage issue at an assembly last week. (Photo by Megan Bachman)

A 1965 grad of YSHS and a Republican, DeWine was a Greene County prosecutor, state senator, U.S. representative, Ohio lieutenant governor and U.S. senator before he was elected Ohio Attorney General last year.

Much of the discussion during the assembly and after centered on DeWine’s view that gay Americans should not be allowed to marry, a stance which was questioned by several students, some of whom spoke up about having gay parents or being gay.

“I moved here because I’ve been harassed because my mom is gay,” said YSHS student Elizabeth Hock in front of her peers at YSHS and McKinney School.

DeWine responded that while the culture is changing and it is no longer acceptable to discriminate against gay people, same-sex marriage remains controversial.

“I think gay individuals should have equal rights but I’m not in favor of gay marriage,” DeWine said.

Students continued to push DeWine on his stance on gay marriage, asking whether it was based upon his religious beliefs or legal opinion and bringing up problems gay couples face such as hospital visitation and child custody. DeWine said that these “practical problems,” can be solved short of allowing marriage. Another student said that denying gays the right to marry went against the Constitutional provision that “all men are created equal,” which DeWine said was a “legitimate opinion.”

A conservative, DeWine said that he was a minority growing up in liberal Yellow Springs, and that sparring with his classmates over political issues honed his debating skills. On typically losing statewide elections in the village by a margin of 7 or 8 to 1: “Being the native son only goes so far in Yellow Springs,” he said.

DeWine was born in Springfield, grew up in Yellow Springs on N. Winter Street and currently resides in Cedarville Township. His family history in the village dates back to the 1840s, when his great-great-great-grandfather came from Ireland during the potato famine to settle in town. The family of his wife, Frances Struewing, also has a long history in the village, he said. He visits Yellow Springs often since children and grandchildren still live in town.

When DeWine told students how he later married his middle-school sweetheart years after taking her to the Little Art Theatre for their first date, the tale elicited an audible “aw” from the student body. The light-hearted moment later gave way to a more tense discussion with students over social issues.

In response to student questions, DeWine said his most difficult votes as a senator were national security decisions, that political polarization in Washington is eclipsing bi-partisanship and that while he believes that human life begins at conception, birth control should remain an individual’s choice.

DeWine spoke often about his independence as a legislator and challenged students to think for themselves, as he said he did throughout much of his political career.

“I did things not typical to my party,” DeWine said. For example, he upset the National Rifle Association over votes on gun control and sometimes stood apart on an issue as the only Republican in his effort to reach across the aisle, he said.

DeWine said in response to student question whether he was tempted to become a Democrat, Tea Partier or “radical anarchist,” that he doesn’t like labels and that while most would call him a conservative, he considers himself independent, especially in the role of attorney general.

DeWine told students that as attorney general he oversees the state’s crime lab, like that depicted on the popular TV show CSI, and that his office helps to protect Ohio citizens from fraudsters and other criminals, having targeted sex traffickers and busted bogus charities.

When a student asked DeWine to weigh in on the Obama administration, DeWine said that he thinks Obama’s healthcare law is unconstitutional and that Obama should have sought more bi-partisan support for the reform. DeWine went on to say that Obama has made positive steps in foreign affairs, much of which is attributable to Secretary of State Hilary Clinton, whom DeWine said would have made a stronger president than Obama.

“That doesn’t mean I would have voted for her,” DeWine added.

On George W. Bush, DeWine said Bush was a good president in response to a question from YSHS student Reed Houston, who then responded, “me too.”

“I’m for anything you’re for — I’m a Republican,” Houston told DeWine after the assembly.

Amanda Rentsch, a conservative student, thanked DeWine for coming and told him she thought he was brave for speaking at Yellow Springs High School.

“His opinions are definitely not very agreed with in Yellow Springs,” Rentsch said. “For someone to come in and speak their mind made me feel better about doing so.”