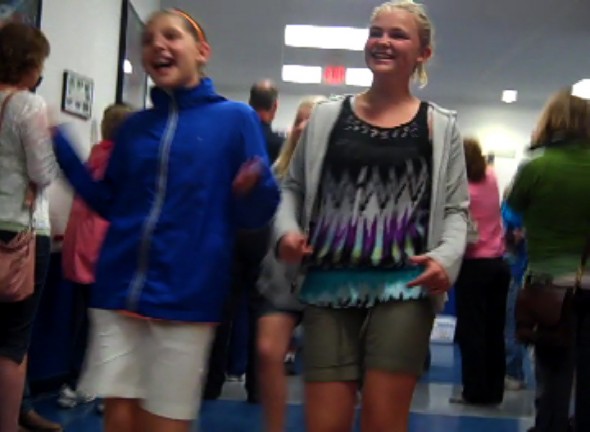 The 2012 annual sixth-grade clap-out happened at the end of the day, June 1.

The halls slowly lined with students, the excitement mounted and parents readied cameras and phones as Mills Lawn School prepared to clap out its latest graduating class of sixth graders.

The tradition of “clapping out” the oldest members of the grade school began in about 2001 under then-principal Christine Hatton. It involves the sixth graders entering at the far doors of the first/second grade wing, and — sometimes triumphantly, sometimes slightly embarrassed — walking a friendly gauntlet through the “L”shaped school halls past clapping, hooting and cheering kids, beaming teachers and weepy parents, on their way back to their MLS classrooms for the last time.

The entire event lasts no more than maybe a frenzied 3 minutes, then the crowd disperses and the bittersweet mayhem of dismissal on the last day of school takes over.