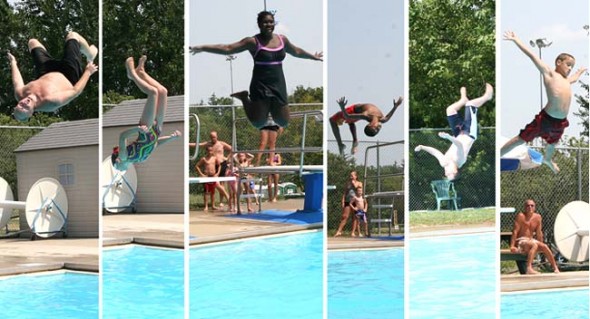 Summer-saults: Even though the temperature rose to a lethargy-inducing 96° last Thursday, July 5, jumpers rose to the occasion to show off for the camera at Gaunt Park pool’s deep end. Pool officials cited heavy use during the heat, and a record attendance that Friday. (Photos by Suzanne Ehalt)

A overly-hot village keeps its cool

Villagers took the second week of scorching heat like champions last Friday and Saturday, when temperatures soared to 101 and 103 degrees Fahrenheit, record highs for those days in the region. The Village pool was well utilized, as were air conditioned homes, where most people wisely stayed to avoid the heat local health and safety authorities said could be life threatening.

“People were pretty intelligent, they stayed inside and hydrated, and there were fewer [emergency] calls than we thought there would be,” Miami Township Fire-Rescue Chief Colin Altman said on Monday.

The EMS squad responded to about five calls over the weekend for heat-related illnesses, mostly among older residents, three of whom were treated for ­dehydration.

The local police didn’t have any calls of note over the weekend, and the Village power met demands without major incident. According to electric Superintendent Kelley Fox, two transformers overheated late in the day on Friday, causing about eight homes in the areas of Pleasant Street and West Whiteman Street to lose power temporarily. In each instance the crew had the power restored within two hours, Fox said.

“They said that this heat wave is the longest stretch we’ve had since 1973,” he said with satisfaction that the Village power grid was able to handle it. “We’re fortunate that that’s all we had — the system’s in pretty good shape.”

The Village pool was another public system that functioned well and was heavily used for the occasion. According to Pool Manager Tina Fox, over 300 people came to Gaunt Park pool on Friday, where 240 people is the average on a good day at the pool. At one point on Friday there were 165 people in the water at once, said Fox, who has only seen the pool that crowded a few times in the six years she’s managed the facility. The Village aims for a ratio of at least one guard per 25 people, and on Friday the pool had five guards active, including three in chairs, one walking and one in the water. Rotating guards in the water helps keep them cool, Fox said, as well as Gatorade, ice packs and an air conditioned vehicle parked at the top of the hill just outside the gate where guards sat for short periods to cool off.

“It’s tough on us, and sometimes we get dehydrated or nauseous,” she said. “When the heat wave started, we reviewed the heat exhaustion preparedness guidelines, but there were no heat-related illnesses last week.”

While some chose to cool off at the pool, many youth decided to skip the sweaty trek, opting instead for the Bryan Center game room, where 36 kids hung out on Friday, according to monitor Samantha McCann. On a typical summer day, the game room attracts 10–12 kids. The increase was definitely due to the heat, McCann said.

The Yellow Springs Senior Center’s Home Assistance Program received a donated air conditioning unit this year, but has not yet received any requests from seniors who need an AC unit, according to coordinator Amy Crawford. The program, with the help of local Odd Fellows, installed several donated air conditioners in seniors’ homes last year during a heat wave, she said.

The summer heat follows a trend of unusual weather this year. This spring was the warmest on record, with average temperatures about 12 degrees above average in March and about five to seven degrees above average in May, according to the National Oceanic and Atmospheric Administration, or NOAA, website. Memorial Day also reached a record pre-summer high of 90 degrees. The warming continued through the end of June, when the region experienced an 11-day stretch of temperatures above 90 degrees, and peaked on Saturday, July 5, at a full 15 degrees above normal, according to Bryan Coniglio, a meteorologist at NOAA’s Wilmington office.

“That’s unusual for summertime…it’s outside the normal range of what you see,” Coniglio said.

The Dayton area wasn’t the worst place to be last week. According to the San Francisco Chronicle, 30 people died across the nation last week due to the heat. Record highs were set in St. Louis at 106 degrees, Washington, D.C. at 105 and Indianapolis at 104. High demand on the power lines caused a train to derail in D.C. and left thousands without electricity in 20 states, and 120,000 in West Virginia alone, according to the Chronicle.

The warm spell isn’t over, according to Coniglio, who expects the heat pattern to return by the middle of next week .

“Enjoy this week…which looks like 85 for the high with a chance of storms,” he said. “The indications are that it will get hotter again.”

The warnings about more heat to come should be taken seriously, according to Chief Altman, who hopes that residents follow advice to get to a cool place.

“Heed the warnings,” he said. “We’re used to some hot weather, but with weather like we’ve had, people need to pay ­attention.”