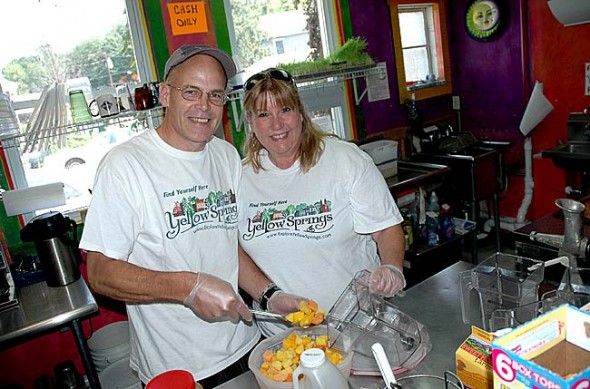 When Main Squeeze went on sale at the beginning of the year, customers may have worried about the fate of the local juice bar. But smoothie addicts can still get their fix at Main Squeeze, now in the hands of Xenia couple Debi Yawn and David Lee, who plan to keep the juice bar’s signature blended smoothies and freshly-squeezed juices while adding some new items to the menu and fresh energy to the business.

Yawn and Lee purchased Main Squeeze last week from owner Donna Lynn Johnson, who started the business in 2006 and moved to Santa Cruz, Calif., in January. In addition to smoothies, juices and bagels, customers can now purchase strawberry and blueberry yogurt parfaits, a smoothie-on-a-stick (like a healthy popsicle) and protein bars.

While Yawn has spent her career in dentistry, and Lee in chemistry, and neither has owned a smoothie shop, their love of Yellow Springs and healthy living prompted the purchase, they said.

“This is great for us because we get to be here everyday and involved in the community more,” Yawn said.

Johnson said she is happy to have recouped some of her investment with the sale (the juice bar itself took five years to turn a profit) while ensuring the business stays open for the good of the village. Johnson is now food safety director for Naturipe Farms, one of the largest organic berry companies in the U.S.

“The reason I sold it and just didn’t close it is that town really needs that business,” Johnson said in a phone interview. “It brings in a variety of what they can eat and offers something that really no one else really offers.”

Yawn and Lee moved to Yellow Springs from Tennessee in 2010 after visiting during Street Fair and though they now live in Xenia, their heart is still in the village.

“We’re ‘finding ourselves’ in Yellow Springs,” Yawn said, referencing the local slogan. “We’re not only immersing ourselves in community, it’s a lifestyle change.”

Yawn said she and her fiancé Lee have been trying to live healthier, and hope to help others do so through the juice bar. Lee, who drinks a shot of wheatgrass juice each day, wants to promote smoothies as complete meals, not just snacks, even though the word smoothie conjures something “soft and pleasurable,” he said, and most of Main Squeeze’s customers come in between meals.

“We see this as more a wholesome alternative than a sweet treat,” Lee said. The amount of fruit and vegetables that can be consumed in a smoothie or juice is almost impossible to eat, Yawn added. One 16-ounce drink can contain two beets, several stalks of celery, four oranges and one banana.

Since it opened, Main Squeeze has been the place for smoothie purists. Whole fruits are juiced without the use of sugary additives or juice concentrates. If a drink contains orange juice or pineapple juice, for example, the raw fruits are juiced on the spot and with the exception of apple cider, all of the juices are made from scratch. Comparatively, McDonald’s “real fruit smoothies” contain added sugar, while popular smoothie chains use pre-packaged mixes. The difference in health value is huge, according to Yawn.

“We’re trying to transition people into the mindset that even though these are delicious drinks, the value of nutrients you get is tremendous,” Yawn said. Of course not all menu items are equally healthy. A peanut butter and chocolate smoothie is like a “liquid Reese’s bar,” she said.

Yawn said that so far the community has been supportive, which she described as “typical Yellow Springs.” And the couple has started to get a sense of their clientele, which Yawn said includes many bicyclists, the over-40 crowd and young people from 17 to 30. The “Bamboozled” and “Over the Rainbow” smoothies seem to be fan favorites and the couple is surprised how far local tourists have traveled. Just last weekend, the store served customers from New Zealand, Argentina, Mexico, Kentucky, Indiana, Missouri and Chicago.

Yawn and Lee, originally from Mississippi, stumbled upon the village when Yawn was working a two-week stint at Wright-Patterson Air Force Base and was given some advice that she should visit the “little hippie community of Yellow Springs” during Street Fair, she said. Later, Yawn found a job as the program director for dental assisting at Fortis College in Centerville so she could live in the area and spend more time in Yellow Springs.

While Yawn and Lee cited the town’s diverse, multi-cultural, educated and hardworking population and a feeling that “everyone’s welcome,” it is also the intangible element of community they connected with.

“It’s that in the community you can sit on the sidewalk and have a conversation with someone who doesn’t know you and doesn’t have to know you,” Yawn said.

While their purchase is still fresh, the new owners of Main Squeeze are considering many ideas for their business. They’ve added a place for customers to park their four-legged friends outside and hope to soon prepare hot food, especially during winter months, serve frozen yogurt with all the toppings and to use the space for local artwork and fundraising events. They said they are undecided whether or not to continue selling home-brewing supplies since it is a relatively small part of the business.

Another staple at Main Squeeze continuing through the ownership transition is five-year smoothie barista and store manager Rachael Chromec, who is excited with the ownership change.

“It’s the difference between having someone whose dream with [the business] is over and whose dreams are just beginning,” she said.