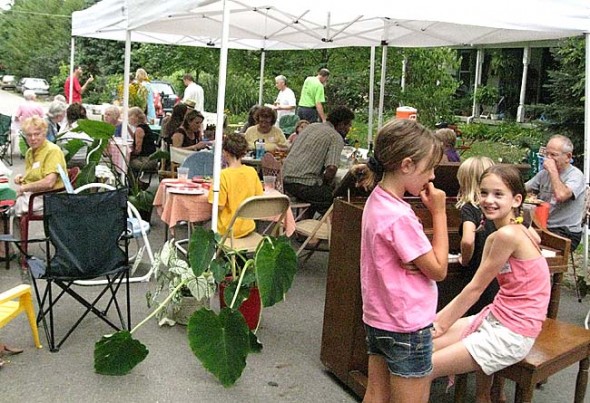 The annual Neighborhood Block Parties, sponsored by the Human Relations Commission, or HRC, will be held on Saturday or Sunday, August 18–19, in neighborhoods throughout the village. Shown above is last year’s Davis/Phillips/Whiteman streets party, with Stephanie Cooper sitting at the piano provided by local musician Mark DeLozier. (Submitted photo by Susan Gartner)

A bit of summer street magic

“You don’t know who’s coming and then at 5 you see someone pulling a red wagon down the street and it turns out to have a tent inside. And then people begin coming out of houses carrying food and it all comes together,” she said.

Gartner is one of several residents of the Davis/Whiteman/Phillips Street area who have made block parties a spirited annual event in their neighborhood. Last year on Davis Street, several tents went up on the street and card tables with tablecloths and fresh flowers were set out beneath, creating a cafe-like effect. As neighbors feasted on potluck fare, Matt Minde and Joseph Minde-Berman serenaded with mandolin and guitar, after which Mark Delozier, who had carted his piano in a pick-up truck, sat down to play golden oldies.

It’s time for neighborhood block parties once again — the official dates are Saturday or Sunday, Aug. 18 or 19— and organizers urge villagers to plan one for their street. Interested persons should contact Patti Dallas or Jeanna Breza of the Yellow Springs Human Relations Commission, or HRC, which is sponsoring the event, as soon as possible. Block party organizers will receive a gift certificate from Tom’s Market to help provide food, colored chalk for sidewalk or street decorations, nametags provided by the Yellow Springs News, a permit for blocking the street, if needed, and a neighborhood emergency contact form.

This is the third year for HRC-sponsored block parties, which were inspired by an annual Stafford Street event organized by Amanda Banaszak, according to Dallas, who sees the purpose of the event as building community.

“It’s an opportunity for people to get to know each other,” Dallas said. And for Gartner, the parties “give us a connection we didn’t have before.”

That connection starts a conversation between villagers that continues to grow, Gartner says.

“It’s a foundation conversation that starts at the party and continues at Tom’s or the Little Art,” she said. “It gets the ball rolling.”

For Adrienne Miller, organizing a block party in her Golden Willow Court cul-de-sac was an opportunity to meet neighbors she didn’t know before. Having moved here a few years before from Columbus with her family, Miller appreciated having the opportunity to interact with neighbors in a social way.

“It helps people slow down, reconnect,” she said of the party. “We’re all well-meaning, but life just flies by.”

The HRC also hopes that the parties give villagers a chance to identify neighborhood contact people, who in the event of emergencies can check on those who may need assistance. For instance, after the 2011 ice storm knocked out power for several days, Laura Ellison knocked on doors of her Livermore/Kurt Street neighboorhood or left notes identifying places to go for food or help.

“This helps knit the fabric of community,” Dallas said.

According to Gartner, part of the pleasure of the parties is that organizers work together, sharing the load. There’s not much to do, she said, except alert neighbors to the time and place of the party and make sure tables and chairs are available. Some organizers alert the police to block off a street for the event, and others, like Miller, just hold the event on their lawn. Each party tends to have its own character, Gartner said, and there are no rules about how each neighborhood celebrates together.

This year parties are already being planned for the areas of West Davis/Whiteman, Whitehall/Fair Acres, Meadow Lane, Stafford/Union, North Winter/Cliff, Kings Court, Omar Circle/Talus Drive, Golden Willow Court and Cemetery/Walnut/Cliff streets. Those interested in planning a block party in their neighborhood should contact Dallas at pattidallas22@sbcglobal.net.

Block party organizers chose a late August date so that neighbors can get together before school starts, as a way to celebrate summer as well as community.

“This is one of the cool things we do in Yellow Springs,” Miller said.