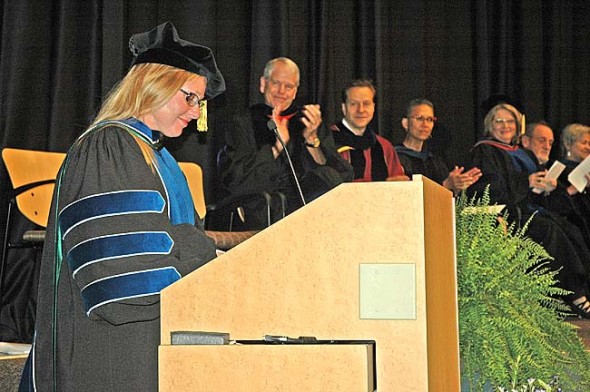 Dr. Michele Dawn Kegley received her Ph.D. in leadership and change at the Antioch University’s commencement ceremony on Saturday. The doctoral program, unique in the nation for its emphasis on practical application, graduated 18 students this year. (Photo by Megan Bachman)

For the 18 graduates from Antioch University’s Leadership and Change Ph.D. program, the degree was far more than an academic accomplishment. At Saturday’s commencement, graduates talked of “achieving a lifelong dream,” and called the degree “one of the biggest accomplishments of my life” as they concluded a doctoral program that few actually needed for career advancement, but that many chose to undertake in order to expand their knowledge and become better leaders in their life and work.

In its 10th year, the unique program, suffused with the values of Antioch — including social justice, practical application and academic rigor — continues to draw top students from around the nation and make a name for itself as a pioneer in the field.

“The Ph.D. has at least tripled my perspective on the work of leadership development and organizational change,” said Martha Miser, a 2011 graduate of the program who came to commencement from her home in Boston. Miser was the global head of leadership and change for ING Bank before she started the program, and craved to bring a social justice perspective on leadership to the corporate world.

“The program made me more socially conscious and I was able to bring that into the work I do know,” said Miser, who completed a thesis that challenged the assumption of economic growth.

While Harvard’s leadership program recommends that students not work while in their program and, in admitting students, prioritizes test scores over work experience, Antioch honors the skills of practitioners and encourages the application of theory, Miser said. Laurien Alexandre, the program director, explained this difference at an information session for prospective students last week.

For example, Julie Johnson, who graduated on Saturday, studied museum leadership while at the same time working at a science museum in St. Paul, Minn.

“[The program] acknowledges that practitioners have knowledge that’s useful as a place to start rather than telling us to forget everything that we know,” she said. Johnson, who completed a thesis on museum leadership, has already been asked to join the faculty at a Getty Leadership Institute program for museum leaders.

This year’s graduating class represented a broad array of fields, from education and nonprofit organizations to the business world and military. Colonel Brent French, a military reservist, said he almost quit the program when he was deployed to Afghanistan two years ago, but ended up using it as an opportunity to complete a thesis on the reentry experiences of military reservists.

There are also no grades, and no courses. Instead students demonstrate learning by completing assignments, also called “learning achievements.” The program is interdisciplinary, with 10 dedicated full-time faculty members in a variety of fields. And leadership theories tend to be broad, encompassing feminist theories and community-focused leadership as opposed to a fixation on the “executive leadership role,” Alexandre said.

Dee Giffin Flaherty, a 2006 graduate who travelled from Pittsburgh to attend commencement, said she chose Antioch’s Ph.D. program because it was unlike other “Ph.D. programs in-a-box” and wasn’t about “jumping through hoops” to graduate.

“You’re changing the world while you’re learning the scholarship of that change,” she said.

The program is also quite diverse, Alexandre said. About 50 percent of the students in the program are people of color or international students. This year’s graduates hail from 12 states, Canada and the United Arab Emirates.

Owing to its Antiochian characteristics, the doctoral program was recently praised by an external review team that called the program a “national model.”

“It is once again placing Antioch University at the forefront of innovation, leadership, and change,” the report states. “Moreover, the Ph.D. program serves as a model for experimentation in innovation within the university itself, having a highly successful model as measured by student satisfaction as well as degree retention and completion.”