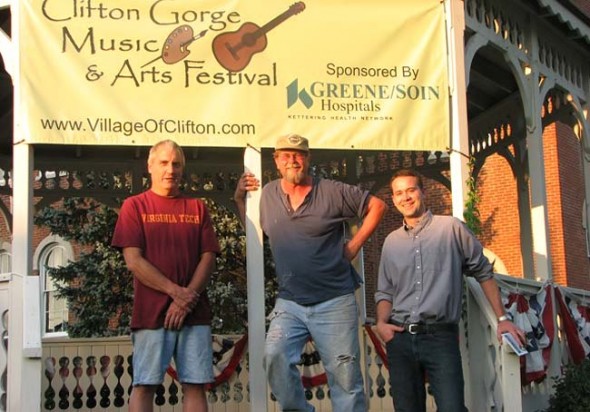 Clifton is back on the map. The festival map, that is.

After a one-year hiatus, the village, located three and half miles east of Yellow Springs, has resurrected its traditional three-day summer event with a new name and a fresh emphasis on music and art.

From Friday, Aug. 24 through Sunday, Aug. 26, the Clifton Gorge Music and Arts Festival will feature an eclectic range of live musical performances that includes bluegrass, reggae, folk, progressive rock, blues, jazz and Americana. Along with the music, there will be a Friday evening performance by the Yellow Springs Soul Fire Tribe Dancers. On Sunday afternoon, the festival will host an auto show featuring vintage European models and classic Detroit “steel.”

During the months of planning for the new festival, Clifton’s mayor and a small group of community volunteers kept an open mind for ideas that would boost interest and attendance.

“We eventually came around to realizing that a beer garden would be a great idea because it’s going to be an outdoor venue,” said Alex Bieri, 32, who was elected mayor last November. “We can’t sell tickets for the music, but we can sell bracelets for the beer garden. We figured that the idea of food and a beer garden would go well on a hot summer day.”

But times were changing.

“When we were planning what was once known as Old Clifton Days before 2011, there was a general malaise that had fallen over everything,” Bieri said. “Old Clifton Days was a well attended festival, but a lot of small town vendors eventually went the way of independent retailers. There was a lack of interest in the old carnival stuff, and the final nail in the coffin was the attendance. More vendors were pulling out, and people weren’t happy about what was left — basically the shell of the festival.”

So Bieri and the Village Council decided it was time to steer things in a new direction. They wanted to rebuild the festival around a theme that was meaningful to people.

“We had the opera house with lots of popular shows, so we decided to play that up,” Bieri said. “Then we did away with the retail type vendors that were selling cheap imports — things that didn’t have any specific intrinsic value to people walking around Clifton. Instead, we invited local vendors and artists who made their own products because that would have more of a draw around here.”

Bieri and the Council decided to include the word “gorge” in the name for the festival because Clifton Gorge is familiar to thousands of people in the Miami Valley. And they concluded that calling the event a music and arts festival would effectively convey the idea that this would be a cultural event more that just retail sales.

Bieri’s views about creating a more diverse festival probably have a lot to do with his upbringing, education and life experiences.

He was born and raised in Yellow Springs, and in high school in the late 1990s, he met his future wife, Minerva, an exchange student from a small town near Vera Cruz, Mexico. Bieri graduated in 1999, and shortly thereafter moved to Mexico with Minerva.

He lived there for several years, studied Spanish, and earned a bachelor’s degree in business administration from the Eastern Institute of Advanced Studies in Vera Cruz. In 2006, Bieri and Minerva bought a house in Clifton where they now live with their two children Daniela, 7, and Diego, 5.

Prior to being elected mayor, Bieri served on the Clifton Village Council. And these days, in addition to his duties as mayor, Bieri manages human resources at Michael Farms in Urbana. Minerva operates a day care center out of their home.

Bieri said the village had to overcome a few hurdles before it could launch a new and redesigned festival.

“Back in 2011, even though we had all these good ideas, it didn’t get off the ground,” he said. “We couldn’t get all our vendor contracts together in time to meet the requisite deadlines. So it didn’t happen, and the council voted to not have a festival in 2011. Instead, we decided we would regroup and slow down the process and make sure we really did it right. A lot of people were disappointed, including local merchants.”

But in his first term as mayor, Bieri was bound and determined to get the festival off the ground—and to do it this year.

“Traditionally, the festival has been an important fundraiser for Clifton,” he said. “But this year whether we make money or not is less important than building morale for the village.”

Jeff Simons is a free-lance writer for the News.