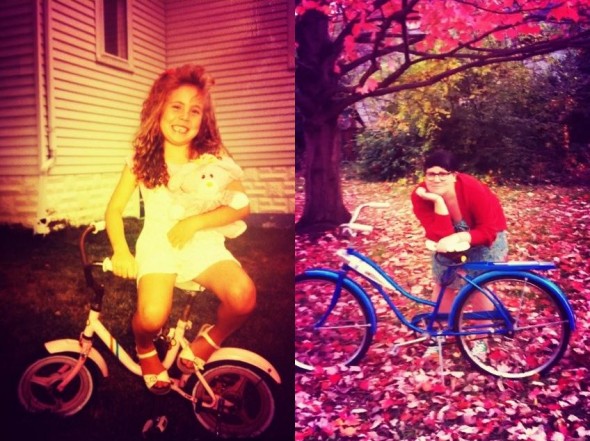 I was never a particularly athletic child. In my youth, I developed a taste for reading, television fare, hand-held gaming systems and corn-based snacks, all of which have followed me into adulthood. These devotions did not preclude my being physically active, but they certainly took the fat, lazy lion’s share over mobile activity. I played t-ball for two summers, each time being consigned to the farthest, most barren reaches of the outfield, where I was allowed to kick pebbles and gaze in wonder at butterflies, until the half inning ended an my team returned to the dugout, or until I literally got hit in the face with an errant pitch. My dad was the coach. Later, my parents convinced me to be a cheerleader, but there was no disguising the fact that, despite the pom poms, this was some kind of exercise that I’d been tricked into. 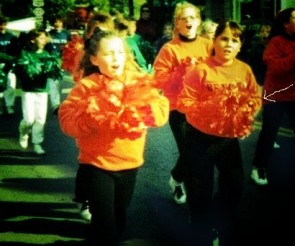 The yellow arrow indicates me, in a parade, very obviously incredulous about why this was happening to me.

Perhaps it was this natural disinclination toward skills that involved the whole body that was the reason I didn’t learn to ride a bike sans training wheels until I was 7 or 8. My sister, who is two years younger than me, learned to ride before I did, because she rode so often and so aggressively that she’d bent the training wheels off the ground and was riding without them for at least a week before she noticed. Though it took me a little while to learn, when I finally did, it was a joy like no other. All first-time bike riders experience it: with only the strength of your own two legs and the curious magic of balance, you can propel yourself to great distances and boundless adventures. Or at least to the end of the road and back a few times until Mom calls you for dinner.

Anthony and I started looking for bikes this summer, as our old ones had sat and rusted to immobility since I was expecting Lucy in 2010 and my baby-laden belly made any graceful movement a laughable failure.

In late July, Anthony piled us all in his car and announced we were driving to pick up a bike he’d bought for himself off Craigslist. I was instantly jealous, and grumbled the whole way there and back that I would find myself my own dang bike, too, and that it would absolutely be more awesome than his. When we got home that night, I grumbled some more to my neighbors, not noticing Anthony excuse himself and slip out to the bike rack. He returned, wheeling a beautiful, bright blue Huffy Galaxie, which I had noticed on our bike rack and coveted for nearly a week. It was the same bike that, unbeknownst to both of us, I had fleetingly viewed on Craigslist a few weeks back, wishing I had the money to buy. He presented it to me, an early anniversary gift.

Jealous, folks? It’s alright, I totally understand. Allow yourselves a moment to reign in your considerable envy, then please, read on.

20 years have passed since the triumph of my first successful bike ride, and I am now in what is definitively the most bike-friendly town in which I’ve ever had the pleasure to live. My bike has headlights that work intermittently and a squeaky seat, and it is for sure my dream ride. I take it to work, the store, the Little Art Theatre. We hitch up the trailer and take Lucy for long rides on the bike trail, during which she alternately “oohs” and “ahhs” at the scenery and grouses to be let out to run around and explore said scenery.

I remember reading in C.S. Lewis’ autobiography his disdain for the prevalence of motor vehicles, since the speed at which one travels means missing the beauties of the countryside. It occurs to me now that surely Lewis had heard of bikes in his part of Europe, and might have conceded that they are a nearly perfect compromise to the problems inherent in both car and foot travel, allowing one the ease of moderate speed and the opportunity to inspect one’s surroundings.

Coming from northwest Florida as I do where, besides the Gulf of Mexico, most of the scenery about is pine trees and red clay, I am still in awe at the sight of a corn field. I especially like the soybeans in the very late summer or early fall, when they turn that amber color, which is backlit to perfection at just about 8 in the morning. The bike trail on the way to Ellis Pond or toward Xenia takes the rider past a few fields, and I always feel like I’ve stumbled on something clandestine to be able to move so close to them.

It has taken me a while to get over my fears of riding in the streets, certain that I’ll be unceremoniously mowed down by an impatient motorist. As of the writing of this blog, I remain whole and un-mowed, however, as the local motorists have as yet displayed patience with my slow speed and wobbly attempts to move to the right-most edge so that they may pass. 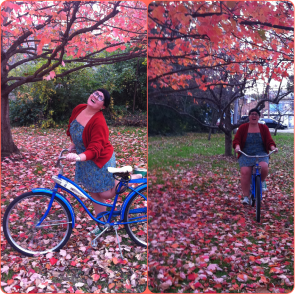 My bike and I are now obviously in the "ridiculous photo shoot" phase of our relationship.

Like my younger self, I am still a clumsy, un-athletic and portly kind of person, whose coordination has scarcely improved since my days in the t-ball field, studying my glove and wondering if Dad would take me to Dairy Queen for a post-game Dilly Bar. (The privilege of adulthood means I can take myself to the Corner Cone now, and celebrate the fact that I never have to run the bases again…at least until next year, when Lucy joins the Perry League.) Despite my sedentary predilections, the joy of riding through town, this time towing groceries or a toddler, has not diminished, and is added to the list of reasons I hope to remain in this town for years to come.

My bike and me are becoming great friends, and I have it on good authority (that is, my authority) that it is the best bike. Such a bike deserves to be given a name of great distinction, but I have yet to decide on one with quite enough pomp and style. If you see us jaunting about the village, please feel free to make your best and most considerate suggestions.