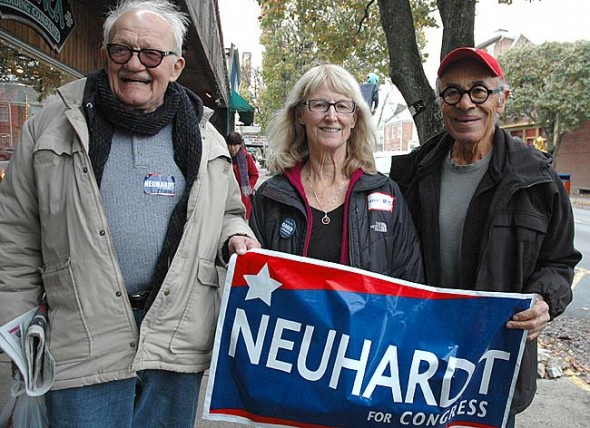 Canvassers blow in from the West

A group of Northern California Democrats left 80-degree weather to brave the cold, November winds of Ohio in hopes of pushing the swing state further left this election. On Monday the four Californians, members of the West Yolo Democratic Club, warmed up at the Emporium before heading out to canvas for Yellow Springs congressional candidate Sharen Neuhardt in Fairborn in 40-degree blistery cold. But they seemed to be more focused on the winds of political change.

There was another reason why the foursome joined the Neuhardt campaign in a week of canvasses, phone banking and events. Neuhardt, whom they described as down-to-earth and supportive of liberal causes like women’s rights and Medicare, reminded them of their state senator, Lois Wolk, a 1968 Antioch College graduate. Neuhardt was the right candidate, in the right place.

“I can imagine Sharen getting easily elected in California,” John Pamperin said. “I’m shocked at how good she is and I’m surprised she hasn’t been elected yet.”

According to Neuhardt’s communications director Michael McGovern, the race between Neuhardt and Republican Mike Turner for the U.S. House of Representatives seat in Ohio’s 10th congressional district is neck and neck. So he has appreciated having extra help to spread the word about Neuhardt, who is less known in the area, and to get out the vote.

“We have a big group of local volunteers, but anytime people come from hundreds of miles away, it’s special,” McGovern said.
In addition, while a lot of volunteers work nights or weekends, the Californians have been full-time for a week. The work has been non-stop. According to Terry Turner, who was born in Springfield and grew up in Cincinnati, they flew in, stopped to get ice cream and then immediately began “pounding the pavement.”

Turner’s best moment canvassing for the campaign was when he approached the door of someone who had a Mike Turner sign in his lawn. After hearing about Neuhardt, the Turner supporter switched his support to Neuhardt and took the sign down.

Terry Turner said the biggest feat has been letting voters know about Neuhardt.

“[Mike] Turner is a known entity,” Terry Turner said. “The main issue [for Neuhardt] is that people don’t know who she is.”
Mostly the Californians have been surprised at how polite Ohioans are, even smiling while they disagree politically, and how cold the weather has been. As they departed for warm California temperatures on Tuesday, McGovern reflected on the impact the group may have made going door-to-door for Neuhardt in Ohio.

“You can spend all you want on TV commercials, but people tune them out,” McGovern said. “Getting in front of them makes all the difference.”