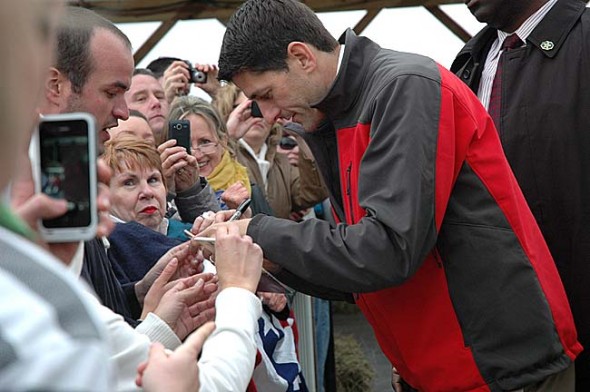 Paul Ryan, the Republican candiate for vice-president, was the focus of a rally last Saturday at Young’s Jersey Dairy, drumming up support from the party faithful in the embattled crucial state of Ohio. The event drew more than 2,000 people, in spite of inclement weather. (Photo by Lauren Heaton)

It was a little overcast and a bit blustery. But that didn’t stop more than 2,000 supporters from showing up at last Saturday’s Paul Ryan rally at Young’s Jersey Dairy. And a number of the Republican vice-presidential candidate’s supporters hailed from Yellow Springs.

Jim Hammond summed up his feelings about the upcoming November election.

“It’s about individual responsibility and freedom,” he said. “We don’t need people in government telling us what to do. Government is getting too big, and it’s not supposed to be like that. Elections were never meant to be this important. The government, their main thing is national defense. They shouldn’t be messing with the economy and tearing things up.”
Hammond, a small area business owner, said that Republican presidential candidate Mitt Romney and running mate Ryan support people like him.

“And I don’t think the Democrats do. They just keep putting more and more restrictions on us: rules, regulations, taxes and all that. It makes it tough to be a business person.”

Joe Lewis, a former Village Council member, said the Republican vice-presidential candidate had a good head for figures. Noting that Ryan was a graduate of Miami University in Oxford, he elaborated on his reasons for supporting the Romney-Ryan ticket.

“I have basic leanings toward their positions, and I think they’re both very good candidates,” he said.

“I’ve been familiar with Romney over the years when he ran previously. His father was CEO of a car company years ago. I feel that he’s a viable candidate, and the way he’s come along in the debates, he appears to be effective and knowledgeable.”
Jackie Hammond explained her reasons for supporting the Romney-Ryan ticket:

“Let’s just say that when I graduated from Wittenberg years and years ago, I majored in economics and business,” she said. “I became a Republican then and I’ve been a great believer ever since.”

Jan Amstutz said she liked all of the Romney-Ryan policies.

“I like their vision for the country, and I’d rather not go down the socialist path that we’re on right now. I’d like to avoid that completely.”

Susan LeGear said she supported the Republican platform because of the current economic situation and her concerns for the future of the country.

“We feel confident that we’re going to win,” she said.

Gene LeGear, who owns a small repair shop in Yellow Springs, summed up his reasons for supporting Romney and Ryan:
“No Obama care.”

But not everyone at Young’s last Saturday supported the Republican platform.

Former Ohio governor Ted Strickland and U.S. 10th District hopeful Sharen Neuhardt, both Democrats, came to Young’s on Saturday as well to enjoy a couple of scoops of Young’s ice cream — Strickland, vanilla; Neuhardt chocolate. They offered a much different perspective on the upcoming election.

Strickland felt confident that Obama would prevail in November.

“We’ll never know until all the votes are counted,” he said. “But I feel that the president is going to win Ohio and a second term.”

Despite the political rancor over the past several months, Strickland said he welcomed a hard fought campaign. But he added there needed to be more concern for truthfulness.

“But as long as the truth is spoken, I think they ought to go at it,” he said.

Strickland also acknowledged that an exorbitant amount of money had poured into this year’s presidential campaign.

“In my judgment it’s not the amount of money, it’s where it’s coming from and the lack of transparency,” he said. “That’s the problem. Because I do believe that there are some oligarchs who would like to take over and control the social and economic agenda of this country. And I think that’s a real danger facing us.”

Citing a recent NPR story, Sharen Neuhardt said the millions of dollars wealthy Republican supporters like casino magnate Sheldon Adelson and David and Charles Koch contribute to the Romney campaign is like a small business investment to reduce their taxes. The equivalent for an individual earning $50,000 a year and contributing $200 to a candidate is much less influential.

“That gives you the kind of depth and breadth that these people can wield on the election front,” Neuhardt said. “To people like Adelson and the Koch brothers this is a business expense to guarantee that the oil subsidies keep coming and their tax rates stay low.”

A few hours after the rally, Melina Elum, a former Yellow Springs school teacher, offered her perspectives on the upcoming election. In response to a question posed by this reporter via email, “Which major presidential candidate — Barack Obama or Mitt Romney — offers our country a better vision for the future?” Ms. Elum stood firmly with the Republican platform.

“Mitt Romney’s ‘vision’ is to make America great again,” she wrote. “It is less abstract and is grounded in not only solving real problems, but re-establishing the values-oriented society we once were.  America cannot be great again without this. Romney has proven himself as a problem solver in both the private and public sector.”

In response to a question about Barack Obama’s performance as president, Elum was unequivocal in her reply.

“Obama’s performance over the past four years has been just that — an act,” she wrote. “He’s an imposter of an American and an imposter of a president, so highly unqualified for the job that one has to question how he got to the oval office.

“Votes from the new majority comprised of blacks, Hispanics, and gays, plus all of the voter fraud he could get away with put him there in 2008, and will likely (and unfortunately) keep him there for another four years. It really doesn’t matter to some people what he has or has not done for the good of our formerly great nation. Barack Hussein Obama has been successful as a divider and an instigator, and a miserable failure as a leader of America. I believe he operates under a different set of values and is lying to us about what he really would like to see our country become: a socialist nation.”

Local resident Mary White, a Wright State University professor, also responded to an email question about which candidate — Obama or Romney — had the clearest vision for America. Her response highlighted many of the challenges American leaders face.

“I don’t know that ‘clear visions’ — aside from being rhetorically compelling — matter much,” she wrote. “Sure, Romney proposes a lovely vision of peace and prosperity but has no idea how to get there. Obama is having to deal with massive complexity at home and abroad involving unanticipated turbulence among unfamiliar populations and parts of the world.

“Were he to offer a clear vision of what he expects to do about all this I would not believe him, largely because there is so little that is solely in his control and so much uncertainty. The best he can do is to try to navigate the complexities as best he can, with certain priorities in view.” 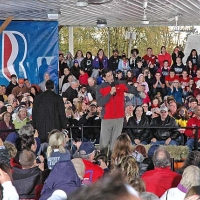 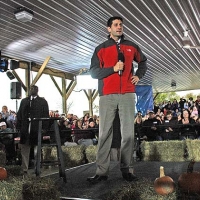 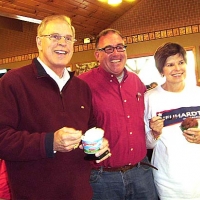 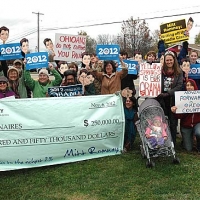