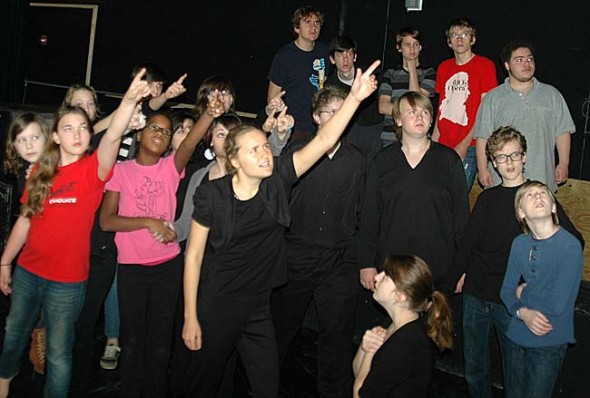 This year’s fall play at Yellow Springs High School has been full of drama with an unscripted denouement. Plagued by chronic absences and a slew of actors dropping out, three weeks into rehearsals for Arthur Miller’s The Crucible, the production was scrapped.

But the show must go on. Only instead of a traditional play, the remaining cast and crew will stage a theatrical review featuring scenes and monologues from Peter Pan, The Adventures of Huckleberry Finn, The Diary of a Young Girl and more. The show, called “Spotlight on Acting: A Theatrical Review,” opens Friday, Nov. 2, with performances continuing on Saturday, Nov. 3, and Sunday, Nov. 4, and next weekend — Nov. 9, 10 and 11— at the Mills Lawn Auditorium. Friday and Saturday performances will be at 8 p.m. and Sunday matinees at 2 p.m. Tickets are $10 for adults and $5 for students and seniors.
Cast and crew members said they were upset that The Crucible was canceled, but they are also excited that a review can showcase a wider variety of acting styles.

“I was disappointed because [The Crucible] is a classic play, but a theatrical review is a good experience because you get to be a lot of different characters,” said YSHS sophomore Alex Kellogg, who will play Mrs. Darling in Peter Pan, among other roles. “It will help strengthen my acting,” he added.

Sophomore Anna Knippling, who was cast in the role of the female lead Elizabeth Proctor in The Crucible, said she was looking forward to finally “being in the spotlight” after watching upperclassmen play leads in previous shows. In addition to a few scenes from The Crucible, Knippling will also play Wendy in Peter Pan and read a monologue as Anne Frank.

“I’m not concerned about being in it enough, I just wanted to do an actual play,” she said.

According to director Shayne Petty, the decision to abandon the original show in favor of a review was hard, but necessary. After a late start to hiring the director and selecting the play, there was a low turnout at auditions, even though they were opened for the first time to middle school students. All 16 students who tried out made the show. Despite the fact that The Crucible is typically performed with a cast of 20, the production was moving ahead.

But then many students stopped showing up at rehearsals, and seven cast members quit, including high school upperclassmen who may not have wanted to perform in a cast of predominantly middle schoolers, Petty said.

“It wasn’t cool anymore because there were no upperclassmen,” Petty said. Others left for personal or academic reasons or had to juggle fall sports with rehearsals. With time to rehearse growing short and too few cast members to fill roles, the choice became whether to change plays entirely or stage a review, a decision which Petty put in the hands of his six leads.
“I wanted to honor the actors who stuck with this project,” Petty said. And the review will do just that, he said, as it highlights the strengths and interests of the actors who remain. Minimalist lighting, set design and costumes will bring the focus to the performances, he said.

“I want it to be, ‘I believe these people in their acting,’ ” Petty said.

The first act will include a staging of the fanciful show Peter Pan, along with scenes from the 1940s farcical black comedy, Arsenic and Old Lace, a romantic scene from a 1930s Greta Garbo film, two scenes from The Crucible and a scene from The Hitching Post. Students will also perform monologues from Shakespeare’s Henry VIII, the 17th century comedy School for Wives and modern pieces that deal with child abuse and menstrual periods.

“We wanted to review lots of different aspects of theater to show students doing multiple things,” Petty said. Petty himself admitted he was somewhat let down that The Crucible had to be canceled, since the show perfectly fit the interests of the Wright State University theater and religion major.

Eighth-grader Bear Wright, originally cast in the leading role of John Proctor in The Crucible, is still excited for the revamped production, though he was looking forward to his first high school lead.

“I was disappointed at first, but I’m happy because everyone who had minor parts will now have their say,” Wright said. He said he plans to continue acting in high school and into college as a theater major.

Knippling and Kellogg were also not discouraged by the chaotic experience and plan to stick with the drama club. Kellogg said that though the theater program seems to have a lot of adult support and funding, it needs more dedicated young actors.
“The reason we don’t have a strong theater program right now is we need people to stay in,” Kellogg said. “Hopefully we can set a good example for the young people and grow it.”

To Kellogg, the benefits outweigh the drama that sometimes arises.

“I love theater,” he said. “I love the tight-knit community it creates and the friendships it builds.”