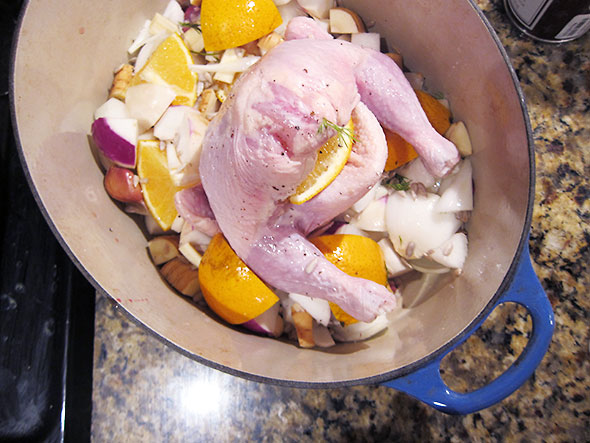 Christmas is the longest day of the year. Mine began in the wee wee hours around 2am. Santa had just finished his run through our neighborhood. I know because the jolly old elf had bustled about our living room without any pretense at subtlety. Amazingly, my daughter awoke the next day declaring that she didn’t hear a thing. She is the soundest of sleepers because the clatter certainly awoke me. 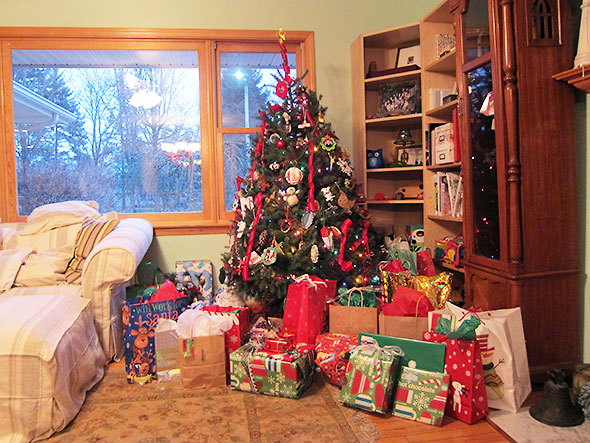 No matter. Christmas always started early in our house. My sisters, our brother, and I would pop up awake at 4am and scamper downstairs. We were on strict orders not to awaken our parents and, in allowance, could open our stockings. At 5:30am, our parents would join us, each arm themselves with a strong cup of coffee, and then load the family of six into the car to go to Grandpa Kelly’s and Grandma Helaine’s for Christmas breakfast. We were expected at 6am and, if we were late, we’d miss saying grace and the first round of pancakes.

Grandma Helaine ruled her kitchen all the days of the year but this. On the special occasion of Christmas, she would relinquish her stove to Grandpa. Grandpa Kelly for his part would whipped up thick pancakes, sausage, and milk gravy for his wife, three children, and eight grandchildren. Meanwhile, his grandchildren would—with no small reverence—take turns slipping into his great reclining chair in the living room. 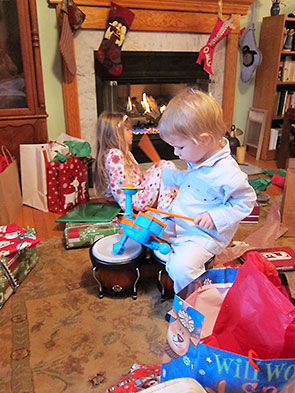 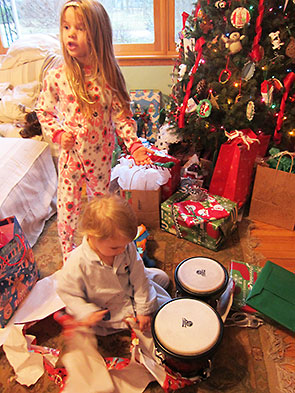 After breakfast and a gift exchange among the cousins, my immediate family would return home to open the presents below our tree. Then, in the evening, we’d welcome the extended family into our house for my brother Pete’s birthday party. We split open a piñata, and my brother would open birthday presents. Finally, my Uncle Glen brought out his guitar like he did at every family birthday party; and we’d sing spirituals, John Denver tunes, and traditional hymns. Next thing I’d know I’d wake up in the morning in the middle of my own bed.

Christmas at home with my children has taken a similar but distinct path. This year, the children shook us out of bed about 2 hours after I had fallen back into it. Clinging to the covers, my husband and I quickly acquiesced to letting the kids open their stockings in exchange for a lingering catnap. We’re keeping with tradition, right? The excited twittering out in the living room could not be resisted, however, and we soon joined them. Our oldest had made quick work of her own stocking and was happily progressing through everyone else’s. I rescued an Esther Price chocolate from her and tucked myself into the couch. Besides a stocking for each of the four of us, Santa filled a fifth one. The fifth proved a source of curious excitement. We took turns guessing which of its treasures was intended for whom. 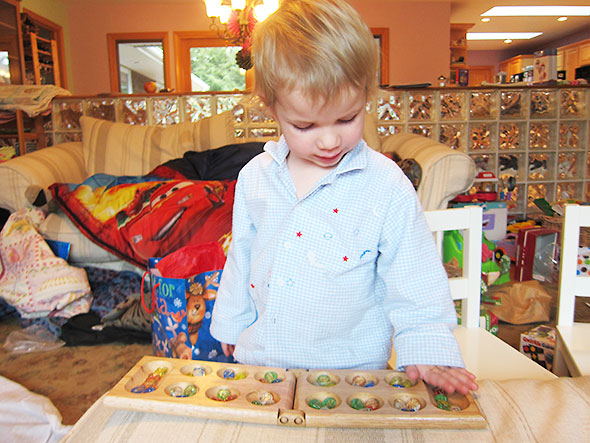 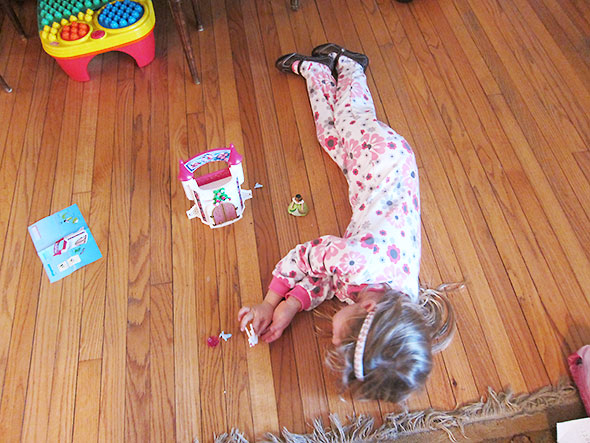 Breakfast came next. My husband Jeremy made a towering stack of pancakes in homage to Grandpa Kelly while I contributed omelets. The gift unwrapping resumed after the children finished eating but at a moderate pace. Our children lingered on the dearest prizes. My oldest had asked Santa for a doll her age, and he brought her a beauty whom we named Kim. My youngest stationed himself at the base of the tree with a set of floor tom toms from Absolute Music while my daughter set about brushing her doll’s hair. Further along in the unwrapping, we opened the African stone collecting game mancala which my daughter and I had first learned to play at the Yellow Springs Community Library, 415 Xenia Ave. We played a quick game with her triumphing. Our youngest took his turn counting the game pieces (“ONE, TOOTH, THUR, FOUR”) as our daughter turned to her princess palace—a lego set from Blokhedz, 136 Dayton Street. The two of them were in no rush to open everything—something my husband marveled at—but enjoyed each gift in its own time.

As midday approached I got ambitious and ventured to Tom’s Market, 242 Xenia Avenue, for a grocery run. We have many blessings in this community, and I am particularly grateful to the service we receive at Tom’s. Christmas day, the market was open from 9am until 1pm. I arrived at 11:45am in enough time to enjoy a slice of coffee cake and morning fellowship. Tom’s was busy when I arrived; the cash registers ringing as I left. The most popular items were cheese and crackers. I came for onions myself to add in and around a 3 pound chicken for Christmas dinner. 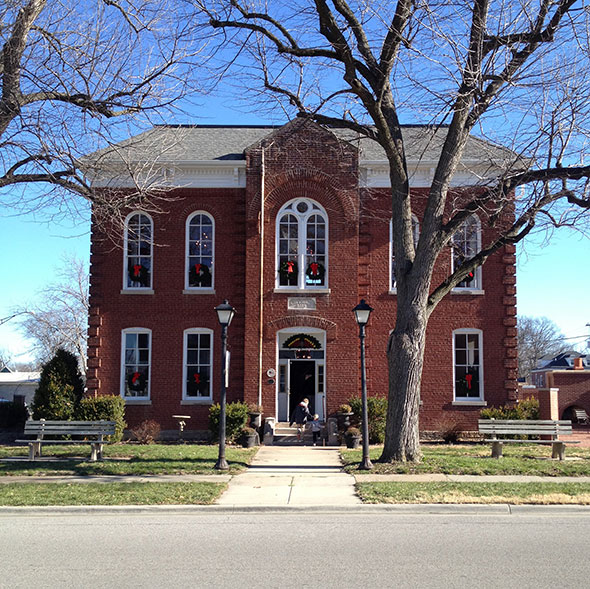 This Christmas day did not include a gift exchange with the cousins; that happy event had happened earlier in the week. The Saturday before, we had met with my husband’s family at a beautiful Italianate in Breese, IL, Beyond the Garden Gate. Assembled in the upstairs banquet hall, we enjoyed a lunch of soup and sandwiches. The adults of the family had conspired nicely; the childrens’ unguarded delight in their gifts was a sure indication. 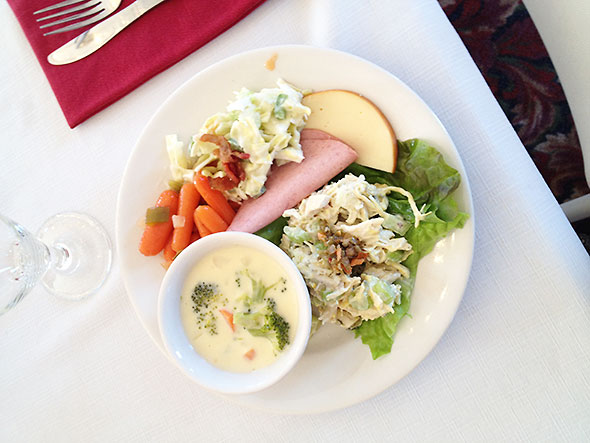 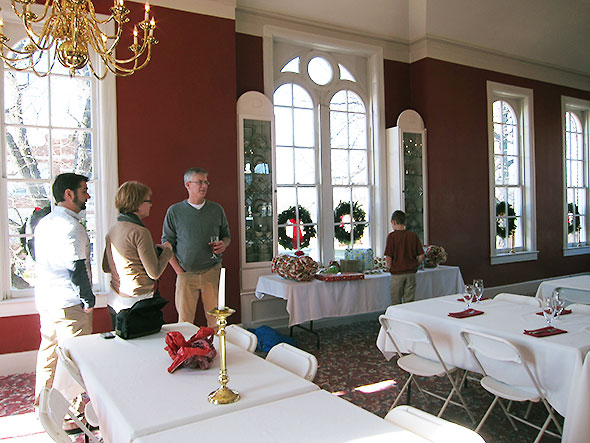 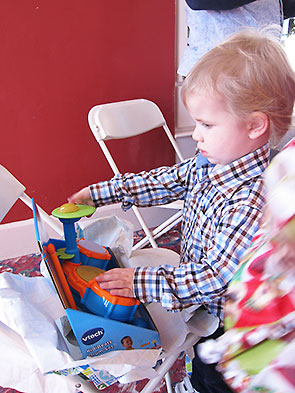 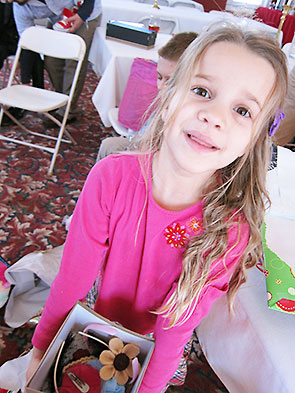 A set of legos and a monopoly game from us proved huge hits, and my kids were ready to try out their new sleeping bags right away. My daughter gasped at the hair bobs that her aunt made for her, beautiful flower bows and headbands made of felt and silk. Our son received a toy drum kit that he entertained us on for the remaining duration of the party. 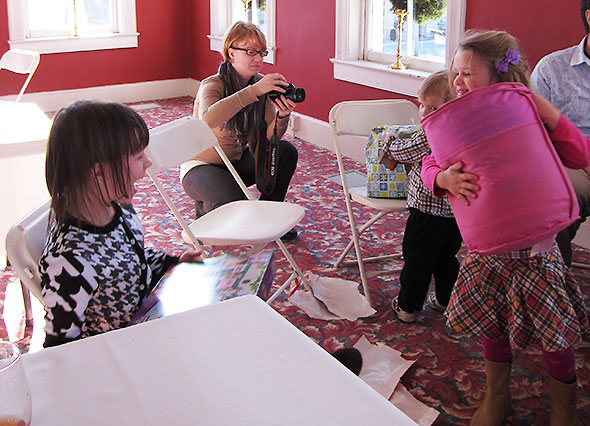 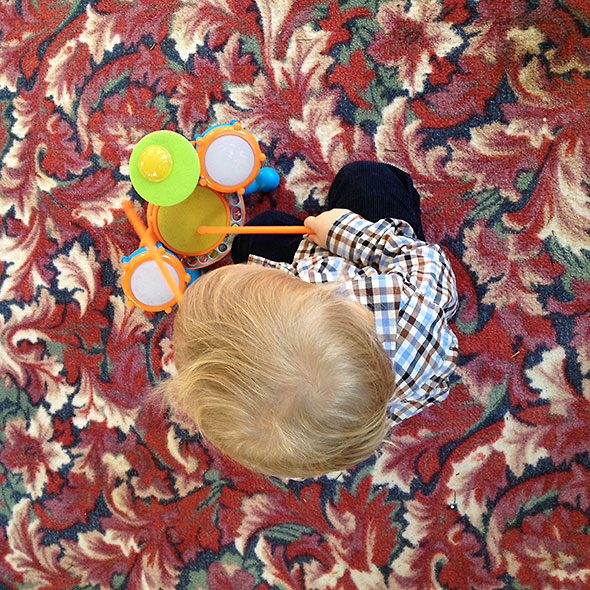 Music is alway a great and lasting gift. Besides the two sets of drums, Santa also brought us a ukulele—the kind you might find in Rita Caz, 224 Xenia Ave. The miniature guitar was the only thing that our youngest liked better than his drum sticks. Christmas evening, he stood on the couch strumming and singing “The Wheels on the Bus”. Imagine a blond 3ft Elvis in blue gingham and you have his stance about right…complete with smirk. 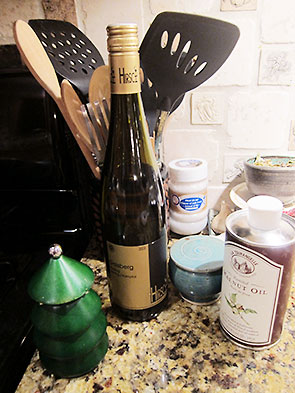 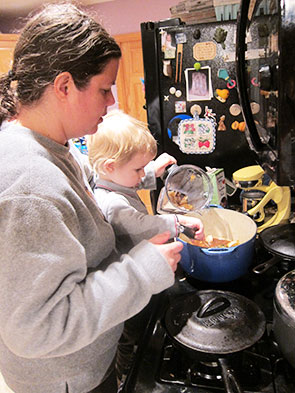 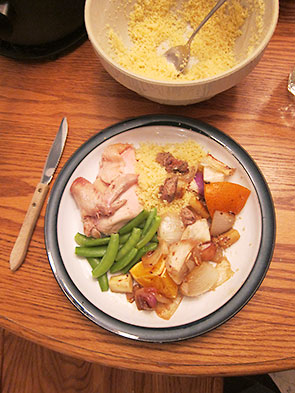 Later, my little Elvis helped me with the cooking. We piled the vegetables about our little chicken from Morning Sun Organic Farm, mixed in a Florida orange sent from my father, and drizzled them with pumpkin seeds and a fine Riesling from the Winds Wine Cellar. Having learned my lesson from Thanksgiving, I cooked the festive bird at a more moderate 375 degrees, and both the bird and the vegetables came out tender and juicy.

We ended our evening with a movie and video chats with my family from all corners…Florida, Colorado, and New York. I miss being with my parents and siblings, but Christmas with all its traditions and memories keeps them close. My dearest memories from this year are the delight I witnessed in my young ones and their talent for serene—if not quiet—enjoyment.