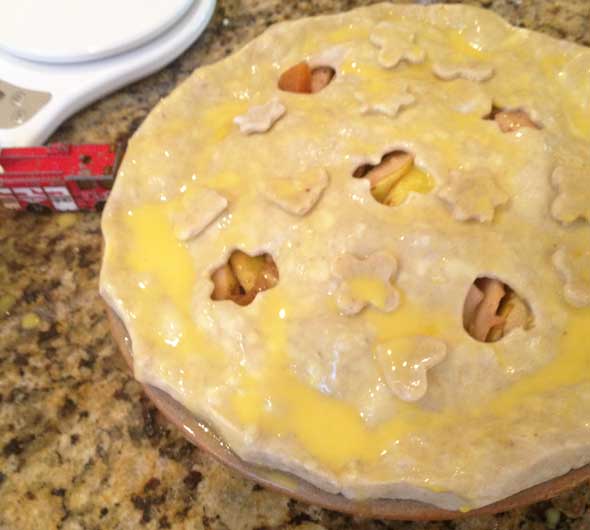 At our Pre-Thanksgiving Feast last Saturday, our 24 pound bird was done in less than three hours. We calculated a 5 hour cooking time but forgot to allow for the fact that our organic bird from Morning Sun Organic Farm was more proportional and leaner than most store bought turkeys and thus prone to cook faster. On top of that, I forgot to turn the oven down from 400 degrees to 350 degrees once I popped it in the oven. As a consequence, we had to take the turkey out of the oven 90 minutes before our guest arrived. We tented the bird with tinfoil and set it in a cool room to rest. I monitored its internal temperature—158 degrees Fahrenheit and climbing rapidly—when we took it out. In less than 5 minutes, the bird’s interior made it to 165 degrees—the recommended target temperature. It peaked at just over 170 degrees and here thankfully stablized until our guests arrived. The turkey meat was fine; a minimum 30 minute resting period is recommended, and our guests were thankfully prompt in arriving. The hot, hot oven had crisped up the skin beautifully and trapped the bird’s moisture inside. The only tragedy was the drippings which were eviscerated. Thank goodness a guest brought mushroom gravy.

The cider roasted vegetables that we prepared were a success, and the turkey was excellent despite the drama. I also made an apple pear pie. WIth the pie, I was less satisfied. The homemade crust was ok, but the filling wasn’t quite right. I had winged its preparation mixing unpeeled apple and pear slices with cinnamon, nutmeg, a generous splash of port, and a dollop of honey. The mixture turned very wet, and I drained off too much flavor with the liquid before folding the fruit into the pie. 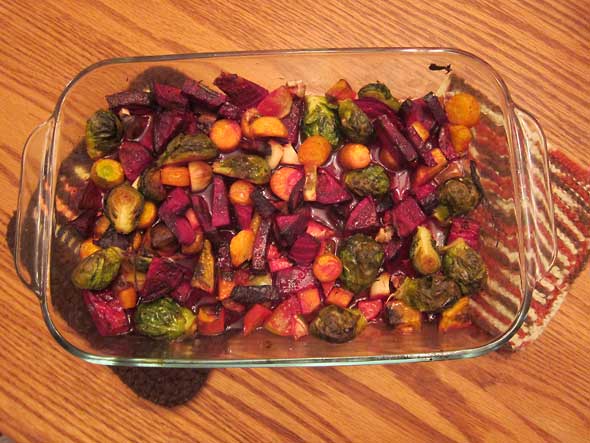 Luckily I had a chance at redemption. I had made a double batch of pie dough and reserved the second batch for a Thanksgiving pie to share with my extended family. I waited until Wednesday morning for its assembly and had time Sunday through Tuesday to reform my strategy. First, I nixed the apples. I don’t like peeling my fruit and vegetables. I mainly buy organic and pesticide free so, I figure, what’s the point? Still, the apple skins were tough after cooking while the pear skins were tender. Thus, the pear moved to the post position and the apple was scratched. Second, I decided to add the port again and returned from the pantry with the port and a handful of dried apricots. My inspiration for adding the dried fruit to the fresh pear came from the Winds Cafe and a favorite dessert, the fruit crostata. I have long enjoyed this favorite dessert at the Winds which often mixes dried fruit with seasonal fresh. Third, a quick consultation with the Betty Crocker cookbook told me to add flour—something I neglected in the first pie filling—and I combined tapioca flour and almond flour to this service. Finally, I snubbed the nutmeg and cinnamon for a dusting of salt. 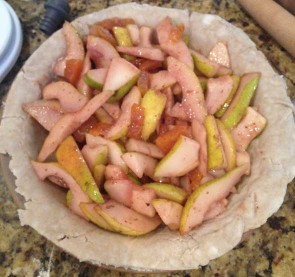 Preheat oven to 435 degrees. Combine the ingredients and set aside. Halve the pie dough and roll out the top and bottle pie crust. Use small cookie cutters or a knife to cut out vents in the top crust. Assemble bottom, filling, top and firmly pinch the pie crusts together. Brush eggnog over the pie crust. 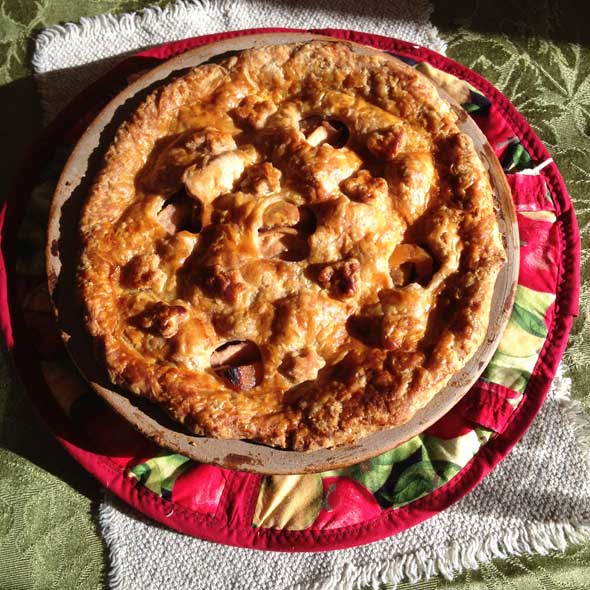 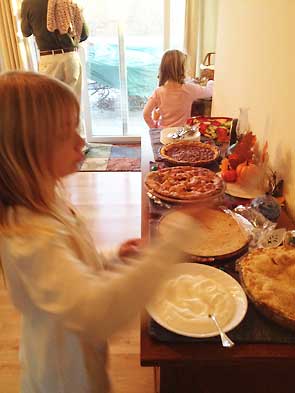 The result was a decided improvement over my Saturday effort. The three stage oven temperatures allowed the crust to puff up into flaky layers in those first minutes of intense heat and the filling to reach a creamy tenderness. By Thursday afternoon, the dried apricot had reconstituted itself drinking in the spare moisture of the filling. The wegdes expanded from nickle-sized to full scale fleshy slices on the order of the fresh baked pear but even brighter in taste. The tapioca flour and the almond flour gave the fruit filling a creamy, nutty texture respectively.

The use of eggnog was born of necessity on Saturday when, after the kids polished off their breakfast, eggnog was the only dairy left in the house. Alternately, you can combine cream and an egg yolk for the wash but—hey, if eggnog is handy—then you don’t have to find a use for the reserved egg white, right?

Most successes require discipline and forethought, and here my initial improvisations went unrewarded. But I’m a smart cookie. I’ll learn.

One Response to “BLOG-A Second Chance”