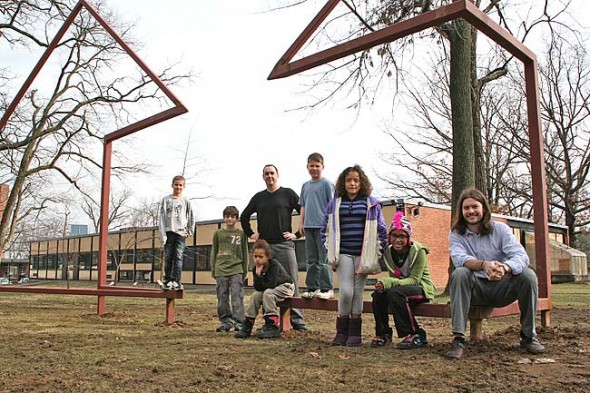 The school community is just becoming acquainted with Triple Shadow, the sculpture and teaching tool that appeared recently at Mills Lawn. This year students will help complete the artwork, commissioned by local residents Maureen Lynch and Richard Lapedes, when the University of Michigan architects return to the village to cast two of its shadows in concrete. Nestled in one of the shadows this week were, from left, Roman Newsome, Ben Mooneyham, Eridon Stewart, Mills Lawn Principal Matt Housh, Noah Van Hoose, Sydney Collins, Annlyn Foster and teacher Jeff May. (Photo by Lauren Heaton)

A few weeks ago a ghostly new figure appeared on the south side of Mills Lawn, its twin steel A-frame pulling in the surrounding neighborhood and framing the school through its vacant center. New playground equipment? A work of art? A way to teach home building to third graders? From the most expansive viewpoint, the structure, entitled Triple Shadow Double Frame, is all of the above, and more. It was designed to use art to get students to wonder about the world around them.

Triple Shadow was originally conceived as an open work of art commissioned by Maureen Lynch and Richard Lapedes to be built by the architects of the couple’s home, located on Limestone Street, across from Mills Lawn. As the architects Keith Mitnick and Mireille Roddier talked about fitting locations, public good, and the couple’s passion for education, ideas coalesced around the schools and what would provoke curiosity about art, math, science and the natural world.

“It didn’t begin as a teaching tool…but as we thought about what potential art and architecture have to satisfy a particular function [such as education], we began to think the project could be a billboard for getting kids to think about the world differently,” Mitnick said. “The conversation expanded to what could we do to provoke not just wonder but direct kids to learn more about the phenomena of space and light, perspective, the physical evironment and relate to a class on how shadows work — things we call ‘perceptual conundrums.’”

As the artwork evolved, so did a curriculum that the architects, both professors at the University of Michigan, designed around Triple Shadow, including lessons on ratio, geometric shapes and orthographic projection (representation of 3-dimensional objects in 2-D). And perhaps the most exciting lesson involves a hands-on opportunity for students to help complete the piece. Mitnick and Roddier plan to return to Yellow Springs several times this year to trace two of the frame’s shadows and cast them both in concrete. The triple shadows (two in concrete and the third cast by the frame itself) will be an opportunity for project-based lessons on angles and the sun’s movement and understanding basic techniques for construction drawing and building space.

Triple Shadow fits squarely into the new direction the Yellow Springs school district is taking with the project-based, arts-integrated learning specified in its 10-year strategic plan, according to district Superintendent Mario Basora. The project is a symbol of what Lynch and Lapedes hope the community as a whole will invest more in as the local district works to transform and modernize its educational model. As a former school board member, Lapedes has invested a lot of thought in the most effective ways to advance public education.

“Triple Shadow is public art, but it is also a tool for teaching astronomy, physics and other disciplines. It’s a segue between something kids can touch and ideas in the world going on around them…and it does suggest that the ideas of teaching children are shifting,” he said. “This piece of sculpture and public art is a symbol of what we hope will happen with the 2020, it’s a symbol of the confidence we have in our teachers and the administrators, and I also hope it will be an icon for the community, as it replicates the traditional rooflines of the homes in our village.”

Though the art and its purpose is original, there is no reason, according to Lapedes, that it can’t be replicated for similar use in other schools.

Mitnick studied with professors Michael Jones and Karen Shirley at Antioch College, graduating in 1983 with degrees in art and philosophy. The independent thinking and academic culture that suffused both the college and the town was what attracted him to Antioch and has kept him connected even after going on to graduate school in California, where he met Roddier, and later finding a position at UM.

“As I’ve gone forward in time, geographically I’ve been moving back toward Ohio,” Mitnick said. “For a while [while working on the Lapedes/Lynch home] I was driving back into the past every couple weeks, being nostalgic for the person I was 20 years ago. But at a certain point it was clear that Yellow Springs was in the present. I made new friends there, and now it feels close both emotionally and geographically.”

Roddier has gotten to know Yellow Springs quite well herself, and is excited to be able to use architecture and art as a pedagogical tool for a younger audience. The twin-peaked figure looks simple only because it was distilled from a complex web of digitally modelled drafts to the pure shapes of squares and golden sections.

Below is a 3-D rendering of how the completed project should appear: