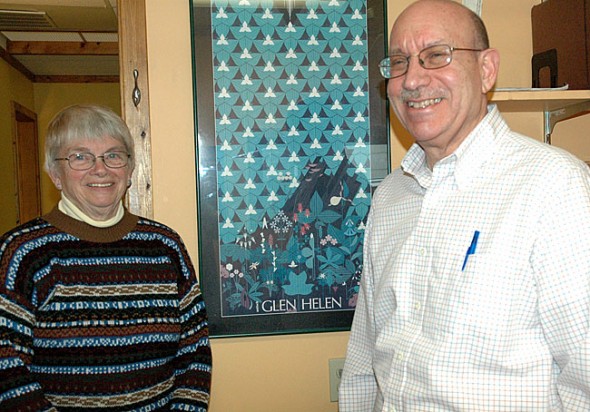 Archivist Rod Ross from the National Archives met with old friends, including Joan Horn, this week while in town for a history residency at Antioch College.

History reconsidered, and then revised

Archivists are known for their fastidious fact-checking and meticulous record keeping, and former Yellow Springs resident Rod Ross is no exception. Ross came to town yesterday for a mini history residency that takes place at Antioch College this week. And he brings with him some surprisingly high-profile stories about the need for record keepers, such as one that received national attention this winter.

A 36-year veteran of the of the National Archives in Washington, D.C., Ross knows a thing or two about how to get information researched and recorded. After Stephen Spielberg’s latest film, Lincoln, was released last fall, Ross received a call from Ken Sullivan, who had seen the film and had been inspired to do some research on the ratification of the 13th Amendment abolishing slavery in the U.S. What he found was that the state of Mississippi had voted against the amendment in 1865 (though it passed anyway) but a century and a half later in 1995, the state legislature finally voted to ratify the law. Except the state failed to send the paperwork, and the motion was never officially carried through.

“Ken was perturbed that Mississippi had passed the amendment but you would never know it because it was never recorded,” Ross said this week.

So Ross helped connect Sullivan to the Mississippi Secretary of State, the Federal Register and a host of other agencies so that in February 2013 Mississippi became the last state in the Union to pass the 13th amendment. Since then Sullivan has appeared on NPR and other radio shows, and the issue was aired with ample grief on the Jon Stewart Show.

Participants in Ross’s presentation tonight (Feb. 28) on “Lincoln and the 13th Amendment,” taking place at 7 p.m. at Antioch College’s McGregor Hall, room 147, will again be reminded that the dusty ledgers of the past really do matter.

Again, a lesson from the film, Lincoln, which despite the numerous Academy awards it garnered last week, has also received some attention for having rewritten some parts of the Civil War-era history. One example was the film’s version of the Congressional vote on the 13th Amendment to abolish slavery, in which two of the Connecticut delegates voted against the amendment. In fact all four of Connecticut’s delegates voted for the bill, as Connecticut Representative Joe Courtney pointed out last month in a story in USA Today. Lincoln screenwriter Tony Kushner said that he rewrote the vote for dramatic effect. But archivist Ross is eager to demonstrate at tonight’s event how researchers can verify the facts themselves by pulling the actual voting ledgers at the archives.

The Antioch College residency also includes historian and Antioch alumnus ’65, Bob Johnson, who will present a workshop on using presidential tapes for historical research. The program, which takes place in McGregor 149 tonight at 7 p.m. (same time as Ross’s program) will use White House audio recordings of Presidents Kennedy, Johnson and Nixon.

On Friday, at 7 p.m., at the Coretta Scott King Center, the historians will host a panel discussion about the Freedom of Information Act and its implications for social justice issues.