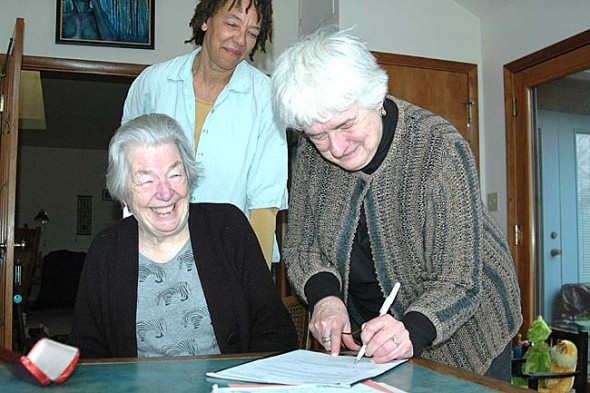 After deciding recently to donate her body to science when she dies, Jane Baker, left, last week signed an anatomical gift donation to the Boonshoft School of Medicine at Wright State University. The decision was just one of many that a group of local residents, including Jane Brown, right, and Ona Harshaw, have begun talking about as they consider end-of-life issues for themselves and their families. (Photo by Lauren Heaton)

Preparing in life for one’s death

By design, Paul Wagner lived an active, healthy life, straight through to his 90th year. So when he got sick and had more pain and pain management than comfortable living, he decided it was time for him to die. One day last July he stopped eating and drinking. Two weeks later, he died, peacefully and the way he wanted. His wife, Carolyn Treadway, and his children were by his side.

“Paul was definite about it, and we were all willing to support him,” she said. “He wanted people to know about it as an option if they ever got that far.”

Wagner left his wishes with his fellow Quakers, who along with a small group of villagers with experience in both the practical and spiritual elements of death and dying, organized several community conversations entitled “Exploring End-of-Life Issues.” The first was held in January, and the second is scheduled for Thursday, Feb. 21, at 7 p.m. in Rockford Chapel. The meeting format includes sharing of stories and questions and discussions of issues and concerns participants may have.

Few people know just when they will die, but those who want to can decide how they leave the world, according to Jane Brown, who worked for many years as a hospital chaplain and then a Hospice care provider. Brown is quick to say that she doesn’t and couldn’t have the answers, because end of life is so personal and different for everyone. But she thinks the group can help those in the community who want to raise the answers for themselves.

“There’s no pattern, no one formula dictating how it should be,” she said in an interview last week. But her training as a chaplain taught her one way to open the conversation. “When you walk into a room you look around and see who is open to talking about death. Sometimes it’s the patient, and sometimes it’s someone else.”

Donna Sanders was not only open to the possibility of death, she somehow knew after a difficult surgery last fall that she was not going to recover, according to her daughter, Ona Harshaw. So she called all of her family and friends, who gathered around on her king-sized bed, to talk, hold hands, and be together during her last few weeks of life. Free from the sometimes futile business of a hospital, Hospice nurses kept Sanders physically comfortable until she died at home on Nov. 10 at the age of 75.

“It allowed her to stretch into this long moment of dying and connecting — it was hard but also thrilling,” Harshaw said. “She ended her life communicating beauty and happiness, and she became light by the end.”

Some people face a sudden loss of health, and their families and friends make decisions for them, such as the case with Bill Hooper, who died in 2011. At 91, Hooper suffered a broken leg and ended up on life support, which his partner, Jane Baker, along with his children chose to discontinue, Baker said in an interview last week. And others face a slower, less certain decline, such as Jo Ann Molk, who at 77 learned she had Alzheimer’s disease. According to her son, David Turner, over time her disease made Molk more and more paranoid, angry, and depressed. Once a confident, outspoken woman, Molk was growing increasingly frustrated with the loss of control her disease was taking from her. One day she slumped down in a chair and said to her son, “I’m just miserable, David.”

Earlier in her life Molk had followed the philosophy of Derek Humphry, author of the controversial Final Exit, a guide for suicide and assisted suicide for the terminally ill. She felt she had a right to make that kind of decision for herself, and in the end, she did, Turner said. She left a note clarifying her intention to die, taking care not to implicate anyone else. In February 2010 she used a helium tank and hood to cause her own suffocation.

Turner understood her decision and feels it was the right one, for her.

“She went out the way she wanted to,” he said. “She wanted to have control, and she took it.”

Even though death will come to all of us, people tend to avoid the subject as long as possible. But Turner, who managed the affairs of both of his parents after their deaths, urges people to consider planning ahead with everything from finances and wills to end-of-life directives and memorial wishes. Donating one’s body to science, such as the anatomical gift Jane Baker recently decided to make to the Wright State University Boonshoft School of Medicine, is also better planned ahead. Rational thinking about a difficult subject is much easier done in the abstract, rather than during a period of stress and grieving, Turner said.

“You should do end-of-life planning before the end of your life,” he said. “If you have this stuff taken care of, it makes it so much easier for everyone.”

Paul Wagner and his family used the services of Hospice for pain management when he decided he was too uncomfortable to continue. Wagner had suffered burns and complications after a series of radiation treatments for skin cancer. He spent nine months trying different therapies to recover, and was so relieved when he learned of the organization Compassion and Choices, an end-of-life counseling and planning resource, Treadway said. He decided almost immediately that he wanted to stop eating and did so to little distraction.

Not everyone in the local Friends society agreed with Wagner’s approach, Treadway said. One person said, “That sounds like suicide,” which it was, said Treadway, “a very natural kind.” Others debated how “terminal” his condition actually was. But in the end, a committee of Quakers supported Wagner in the decision he had made for himself.

A few days before he died he asked to have a little taste of ice cream with chocolate sauce. Then he slipped into a coma and quite peacefully, passed away, Treadway said.