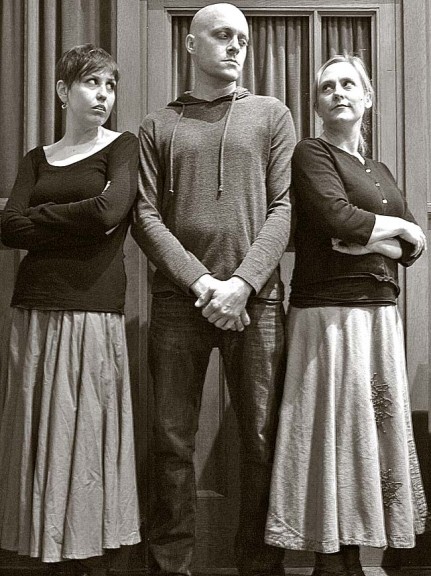 The revived Center Stage community theater group will present Arthur Miller’s The Crucible this weekend and next on Fridays and Saturdays, March 8, 9, 15 and 16 at the First Presbyterian Church. Shown above are from left, Kayla Graham, Brendan Sheehan and Ellen Ballerene playing Abigail, John Proctor and Elizabeth Proctor. (Submitted photo)

In the upcoming weeks, the Center Stage community theater group will put on its fourth theater production since its revival in 2011.

Directed by Lorrie Sparrow and produced by Kay Reimers, The Crucible will take place Friday and Saturday, March 8 and 9 at 8 p.m. at Westminster Hall in the Presbyterian Church, with performances continuing on March 15 and 16. Tickets are $10 and the company suggests that, due to the violent nature of the work, parents not bring children under the age of 10.

Written by Arthur Miller in 1953, the play is ostensibly about the Salem witch trials of the 1690s, but it can also be interpreted as an allegory for the McCarthy-era communist witch hunts of the 1950s. However, Center Stage’s version of the classic play differs from what you might recall from your high school English class. While the play stays absolutely true to Miller’s original script — heightened language included — Sparrow has chosen to move the play through time, with different acts occurring at different points in history. This decision, which Sparrow recognizes as risky, will hopefully make the play more relevant and challenge audiences to consider how it might apply to today’s world.

“I started thinking about this year’s elections and people with moral certainty…When our moral certitude triumphs justice and law, then we as a nation are not who we want to be,” she said.
And while Arthur Miller chose to explore these ideas in 17th-century New England, Sparrow feels that the themes are timeless and worth examining in more contemporary settings. Her choice also made the work more appealing to some of the actors.

Ellen Ballerene, who plays Elizabeth Proctor, was drawn to this production partly because “it’s not the same boring old Crucible. It’s different from other [versions of The Crucible] and it makes it seem more real.”

But making the play relevant to the modern world has also challenged the actors, according to Sparrow.

“It’s been a difficult rehearsal process because we have had to face things in here,” she said, and shared that more than one cast member has been moved to tears as they have come to terms with the violence of the work.

Ballerene, who is more accustomed to performing comedies, is keenly aware of the difference between lighter pieces and the demands of the current production: “When you do a drama, it really affects you,” she said during a recent phone interview. “It can be very draining.”

In addition to the heavier material, the length and the language of the play have presented challenges to the cast and crew alike. With five acts, and running a little over two hours, successfully producing The Crucible requires enormous concentration and a prodigious memory on the part of the cast. While actor Thor Sage enjoys Miller’s skillful and serious use of language, it also makes getting off-book extremely difficult.

“You have to listen so intently to catch your cues,” he said, since many times it’s only one or two short lines among a larger conversation.

Interestingly, it’s perhaps these same difficulties that Sparrow finds inspiring as a director:
“The Crucible is a challenge for strong performers — it’s nice to be able to challenge them and see them rise and rise and rise,” she said. Stage manager Amy Cunningham agreed: “They’re scared to do it, but Lorrie coaches them through it” and the result is a powerful, intense piece of theater.”

This production and the new Center Stage owe its existence in large part to Kay Reimers, who also produced the group’s previous shows of My Town and The Cherry Orchard. Although Center Stage closed in 2003, it had functioned as a community theater for over 30 years. Like its current incarnation, it was a company composed entirely of volunteers that, under Jean Hooper’s direction and management, performed over 100 plays during its lifetime.

Reflecting on Center Stage’s first life.  Reimers recalled that the theater “did a lot of big cast productions; it drew in the whole town — anybody who wanted a part got involved.” Similarly, Reimers is driven by a desire to tap into the creative resources of Yellow Springs and create opportunities for anyone and everyone to participate.

“I wanted to do something that involves all different kinds of people,” she said.

While the current Center Stage hasn’t tackled any of the Gilbert and Sullivan musicals that Reimers recalls from the past, The Crucible counts a cast of 19 people. In doing so, Reimers has been able to achieve the kind of expansive, community-oriented theater she envisioned for Center Stage.

“I was surprised by getting so many age-appropriate people,” she said, noting that they have both children and people over 70 participating in the play.

Both Sparrow and Reimers attribute Center Stage’s rebirth to the amount of talent that can be found in Yellow Springs. Indeed, for Reimers, the community’s resources was one of things that motivated her to revive the project.

“There were so many talented people floating around, I thought we could really launch something,” she said. And although The Crucible is difficult, she has not been disappointed, sharing that she has seen “an amazing level of professionalism from people” in the current production.”

The community aspect of the company has probably been the most valuable experience of all for Center Stage’s participants.  While villagers like Sage used to commute to Dayton or Xenia to participate in theater, they now have an opportunity to work in, and get to know, their own community. For Reimers, the company has taken a diverse group of people and turned them into “a close knit group of friends.”

Westminster Hall at the Presbyterian Church, which provides the physical space for Center Stage’s productions, represents yet another communal dimension for the theater. With no grants and no outside funding, the donation of the space is crucial for Center Stage’s existence.

Although the acoustics can be challenging, Reimers feels very lucky to have the space and enjoys the flexibility it offers in terms of staging.  While eventually actors such as Ballerene and Sage would like to see Center Stage have a more permanent home and theater, in the meantime all members are excited about the full schedule ahead of them. Rehearsals for the next play, The Women by Clare Boothe Luce, are coming up at the end of March, and Reimers hopes to find a new work from a new playwright for the fall. While that might be another risk, Reimers and Sparrow are grateful for the supportive audience they’ve found in Yellow Springs and hope people will be excited by something new.