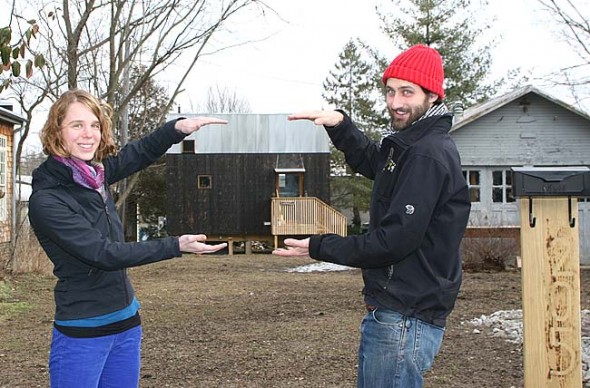 Allison Paul and Alex Melamed live in what is perhaps the village’s smallest home, a 320-square-foot structure that they designed and built on the back of their Walnut Street lot. The house was approved as an accessory building to the larger home they plan to build in the front of the lot. (photo by Suzanne Szempruch)

Living well in a tiny house

If you close your eyes before entering Alex Melamed and Allison Paul’s new Walnut Street home, then open your eyes once inside, you might not realize you’re in a tiny home. The high-ceilinged, light-filled living room feels spacious, with a kitchen on one end and a bed, out of sight, in the loft above.

Recently, Melamed gave a tour while sitting at his white desk on one wall.

“If I’m looking at my computer, it’s an office,” he said, demonstrating. “And if I turn this way, it becomes my living room.”

Melamed and Paul have been living in the village’s tiniest home since construction was completed in October. Living in the small space  ­— it’s one room, 16 by 20 feet, for a total of 320 square feet — hasn’t been hard, he said in a recent interview.

“It’s not bad. I quite like it,” he said. “Allison and I are good at getting along, and there’s rarely friction about the space.”

Communication is key when two people not only live together in a small space, but also maintain home offices, according to Paul. Mainly, she said, she and Melamed do well sharing their schedules with each other, so that “one of us doesn‘t come home expecting to have a quiet space and end up finding a meeting going on.” She also deems organizational skills important, to keep the space “uncluttered, artful and comfortable.”

“I like sitting in the loft in the afternoon with the sun streaming in the small windows on either side and being able to look out over the low wall of the loft to the whole room below,” she wrote in an email. “Each space works with every other, is interconnected and feels nicely intentional.”

The fate of tiny homes in the village is one aspect of the ongoing discussion around the zoning code revision, which will next be addressed at a public hearing at Planning Commission on March 21, then sent on to Council. The current code would ban houses as small as this couple’s, and while the proposed revision now allows them in Residence C, the smallest and most dense housing district on either side of Xenia Avenue, the revision still bans houses smaller than 900 square feet in most sections of town.

Melamed and Paul received zoning approval from the Village because their home is considered an accessory structure to the larger house they plan to build at the front of the lot. But if they weren’t planning to build, Melamed, an architect, would consider the tiny home a reasonable living option that aligns with his values and aesthetics.

“People assume they need so much space,” he said, an assumption reflected in the giant McMansions that sprouted up in the last several decades. Assumptions about space are now codified into home building requirements, he said, which require such space-eating elements as built-in closets and large enclosed garages.

But Melamed, who has a masters in architecture from the Savannah College of Art and Design, knows about space, too. And he’s been influenced by the time he spent studying in France, where he observed how most Europeans live quite happily in small spaces.

“They have very different assumptions about how much space is needed,” he said, and generally live in far smaller, more energy-efficient homes. They also value quality far more than quantity, he said, a perspective Melamed associates with the continent’s far longer history.

“They’re used to living among old things and old buildings, and they take the long view,” he said.

“They believe that if you’re going to do something, do it right, or don’t do it at all.”

These assumptions fit with Melamed’s own views on how to live well. He and Paul, an artist, designed their tiny home together, then he built it with the help of his business partner, Andrew Kline of Green Generation. Energy efficiency was paramount to the couple, so the windows, which Melamed designed, are triple-paned, keeping heat in during the winter and out in the summer. A heat pump in the wall finds warm air to pump into the house even when it’s cold outside, according to Melamed, who said that such pumps are far more common in Japan. He’s proud of the couple’s two-burner invective stove, the small 10-cubic-foot refrigerator he picked up at Lowe’s (although finding a small refrigerator was difficult) and the shelves that hold their handmade pottery and Bell jars.

“Everyone always ends up in the kitchen anyway, so why separate it?” he said.

Melamed and Paul, who grew up in Tallahasee, Florida, were high school sweethearts who split up for several years when they went to college, then found each other again. (Paul is currently artist-in-residence at Mills Lawn School, as well as manager of John Bryan Community Pottery.) In college Melamed found that architecture brought together his two loves of art and engineering, along with a feeling of making a difference in the world.

“It’s a great way to solve problems, be socially active and make art at the same time,” he said of his profession.

And while he loves the design aspect of architecture, he also loves “swinging ­hammers.”

“My vision is drawing all winter and building all summer,” he said. “That would be a balanced life. I’d be a lucky guy.”

Melamed and Paul first came to Yellow Springs due to Paul’s friendship with villager Anisa Kline, a close college friend. Melamed ended up working with Kline’s husband, Andrew, designing the passive house that Green Generation built on Dayton Street, and after that project, the couple moved to Colorado.

“But you know Yellow Springs,” he said. “We couldn’t stay away.”

After returning, they bought a lot on Walnut Street that’s only two blocks from downtown, a walkable location that’s important to them. It took three months and about $70,000 to build the small house, according to Melamed, who said he could have built the house much more cheaply but expensive details, like the “beautiful, natural and durable” burnt cedar siding, added up. Finished with the tiny house, Melamed is working on designing and building new homes with Kline, who is now his business partner.

Part of living comfortably in a tiny house is living in the right sort of town, Paul believes.
“I think when you live in a tiny home, you have to think of the community as your living room to a certain extent, and Yellow Springs is a good place to do that,” she wrote. “Living in a walkable community, with lots of art and nature readily accessible, means that you can feel at home outside your house and live with a smaller footprint.”