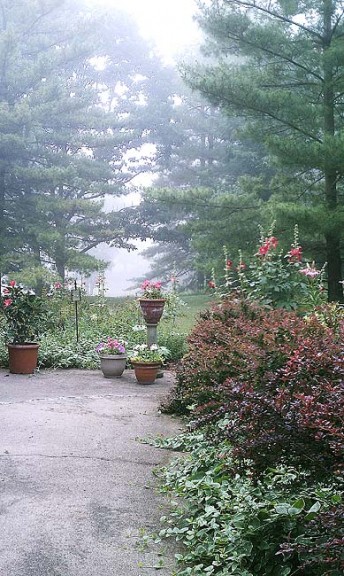 Digging deep into a garden’s gifts

“If you want to succeed at gardening, you have to be willing to fail.
Great gardening requires a certain boldness. It helps to be open to the nontraditional plant, an unconventional border, or an uneven arrangement. You need a taste for the unexpected and a touch of fearlessness about the unknown.

You have to be willing to just plunge in, dirt up to your elbows, and see what happens. It helps if you like surprises — because your garden will always surprise you.”
—from Gifts from the Garden by Carol Siyahi Hicks

A longtime former villager who still owns a house in town and plans to retire here, Carol Siyahi Hicks gives Yellow Springs credit for many things. For instance, it was here she found the friends who helped her discover her passion for the natural world, along with providing her company on trips into the wild.

More than 30 years ago, she and good friends Evelyn LaMers and Donna Cottrell were hiking in the Glen when they decided they needed a new adventure, “something the guys hadn’t done,” Hicks said in a recent interview. The trio decided to go backpacking in the Smoky Mountains, and almost immediately Hicks discovered she loved being out in nature with only a 60-pound pack on her back.

“I backpacked for 20 years, and it touched me in a way that was profoundly transforming,” she said, stating that for many of those years she was off backpacking once a month from early spring to late fall. LaMers accompanied her on many of those trips, although Cottrell wasn’t bitten by the backpacking bug.

And while the difficulty of toting that 60-pound pack on her 120-pound frame was a part of the transforming experience, Hicks has for several years realized that she needs a new way to find bliss in the natural world. And she has done so, just a few steps from her back door, in her garden.

While living in Yellow Springs provided Hicks with deep friendships, the village didn’t give her confidence as a gardener. Rather, when living in town she thought herself a poor gardener because her plants never prospered. But after marrying 10 years ago and moving out into the country, Hicks discovered that perhaps the problem wasn’t with her, but with the shady lot and clay soil of her village home.

“Suddenly what I planted not only grew but flourished, and a delightful addiction began,” she said.
A second addiction, this one lifelong, has been writing, and recently Hicks published her first book, Gifts from the Garden, which brings her passions together.

“It’s about gardening and life,” she said. “In modern life, it’s so easy to get detached from the outdoors and nature. But we do that at our peril.”

Hicks didn’t actually set out to write a book about gardening, but instead found that she’d already written one. She frequently writes notes to herself, and realized that many of her notes were about gardening, and the way that gardening makes her  slow down, savor the moment and witness the beauty of the world. So she spent more time reworking the notes and discovered they organized themselves around seasonal changes. Pretty soon, she had her first book.

“The fragileness of life is everywhere in a garden. It is in the silky blossoms torn by wind and insects. It is in the grasshopper, once strong and now food for bluegills. It is in the memory of the seasons and the knowledge that everything changes.”
—from Gifts from the Garden

Hicks has been writing since, after leaving her childhood home in Long Island, she received a masters in journalism from Ohio State. After college, she and her first husband, whom she met when studying in Turkey, moved to Yellow Springs, where she was managing editor of the Antioch Review for three years. She went on to found Fiction International, a literary journal that continues to this day. Hicks then worked for many years as assistant director of communications at Wright State University, and has for the past 21 years been the vice president for marketing at the Dayton Foundation.

All that writing, even on the job, has kept her “nimble,” she said, when she sat down to work on the gardening book.

When Hicks contacted a friend who is a literary agent in New York City, her friend said she loved the book, but that a first-time author has a difficult time getting published. So Hicks decided to publish her book herself, through Amazon’s Kindle Direct Publishing. Self-publishing “wasn’t that hard,” she said, and offered distinct advantages.

“You can do it the way you want, so that the product is a true expression of your work,” she said. “I like that. This book is close to my heart.”

Now everywhere Hicks travels, she takes the book with her and asks bookstores to stock it. Some have said yes, and even asked her to do a reading. If she can get the store owner to see the book, she has a good chance of having it there, Hicks said, due to the watercolor cover by Evelyn LaMers and the design by Bob Bingenheimer.

Giving the readings has been an unexpected pleasure, because she finds herself connecting with other passionate gardeners. For instance, about 35 people turned out for a reading at a bookstore in Wisconsin, after which people shared their own garden experiences.

“The readings have been very special,” she said.

Yellow Springs readers and gardeners can find Gifts from the Garden at Sam and Eddie’s and Dark Star Books.