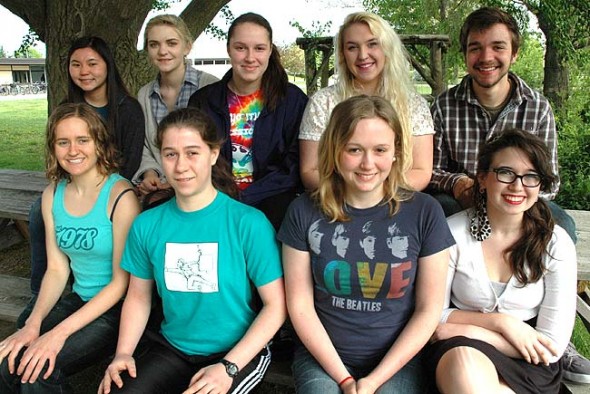 Yellow Springs High School recognized many of its students, especially its seniors, at the annual scholarship awards ceremony on Wednesday, May 15.

Taylor Ford, Hunter Lawson and Regina Brecha are National Merit Commended students. They placed in the top 5 percent of more than 1.5 million students who entered the 2012 competition by taking the 2010 Preliminary SAT/National Merit Scholarship Qualifying Test.

The Award of Merit was given to the following students in acknowledgement of their superior academic achievement and commitment to excellence and attendance: Angela Allen, Lucy Callahan, Maya Hardman, Megan Hiner, Philip Kaiser-Parlette, Katie Kruk, Hunter Lawson, Chauncey Longshaw and Lois Miller.

Rachel Meyer received the Bausch and Lomb Honorary Science Award. Recipients of this award receive a scholarship of $7,500 per year if they attend the University of Rochester.

Rachel Meyer and Erin Grote received Mary Jane Bachtell Awards for Creative Writing in the amounts of $400 and $200, respectively.

Angela Allen received the James A. McKee Scholarship for $1,000.

Taylor Ford and Paloma Wiggins received Bulldog Scholarships of $1,000 each.