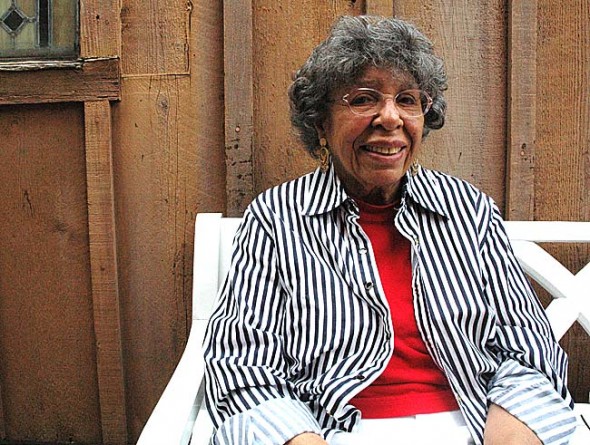 Phyllis Jackson has been chosen by the Yellow Springs Senior Center as the 2013 recipient of the Greene County Council on Aging Senior Center Leadership Award. A celebration tea in honor of Jackson will take place in the center’s great room at 3 p.m. Tuesday, May 14. (Photo by Diane Chiddister)

Phyllis Jackson to be honored

For years, Phyllis Lawson Jackson has been the “go-to” person for local history. The appeal of a historical perspective, she believes, is that even as history teaches us about the past, it also helps illuminate the present.

“History is every day,” she said in an interview last week. “It’s things we forget about as well as new things that are happening.”

While Jackson has spent years honoring village elders by compiling their stories, she will soon be honored herself. She’s been chosen by the Yellow Springs Senior Center as the 2013 recipient of the Greene County Council on Aging Senior Center Leadership Award. A celebration tea in honor of Jackson will take place in the center’s great room at 3 p.m. Tuesday, May 14. Those who wish to attend should RSVP to 767-5751.

According to the Senior Center May newsletter, “Phyllis has been an anchor, a steadfast member who is always available, always reliable, always cheerful and a model of spiritual strength and positivity. The Yellow Springs Senior Center is very grateful to Phyllis for her many years of volunteering and friendship.”

Jackson has over several decades given a considerate amount of her time to others. At the Senior Center, she has since 1982 served as a driver and hostess, and also started the center’s first exercise program. She volunteered at her church, the Central Chapel AME, and was one of the founding members of the Yellow Springs Historical Society. Jackson served as volunteer docent at the National Afro-American Museum and Cultural Center in Wilberforce, and also on the Women’s Park Steering Committee. She was also co-author of the book, Celebrating Women: The Women’s Park of Yellow Springs.

And through it all, Jackson has loved history. Her passion began in high school, when in 10th grade she wrote a paper about Crispus Attucks, the black revoluntionary soldier, and found that her teacher had never heard of Attucks before.

“I was surprised,” she said, to play a role in helping to educate her teacher. “I found that history was what interested me.”

Following her graduation from Bryan High School in 1942, Jackson began a 38-year career at Wright Patterson Air Force Base, starting as a clerical worker and ending her career as an administrative manager. She married Ted Jackson, and the couple went on to have two children, Kevin and Kimberly.

When not working or raising her children, Jackson pursued her interest in history. She spent countless hours in libraries doing genealogical research, including that of her family, who were among the earliest residents of Yellow Springs. Her father’s great-grandmother, a slave in Kentucky, came to the village in 1863 after being freed and relocated here by her owner. But even then, she was not one of the first blacks in Yellow Springs, according to Jackson.

“In the 1860 Census, there are already some blacks in the village,” she said.

Jackson grew up in the family home on the corner of Dayton and High streets. Her father, Albert Lawson, did janitorial work first at Antioch College and then in the local school system, and her mother, Ruth, was a housekeeper at Antioch College. Jackson remembers both her father and one of her three brothers singing bass in the Central Chapel choir, and she remembers her childhood as a peaceful one growing up in a semi-rural, small town environment.

The Lawson family distinguished itself. Jackson’s brother, James Lawson, went on to become the village’s mayor from 1965 to 1974, and another brother, Nathaniel, worked at Morris Bean. Nathaniel’s twin, Reginald, worked at Wright Patterson and also served as a volunteer in the fire department.

During her years at with the Historical Society, Jackson enjoyed the oral histories of local elders, focusing on blacks who had lived a long time in the village. She remembers as especially interesting the Williams brothers, Curtis and Isaac, who spoke of attending grade school at the Union School House, which was integrated in the 1880s. The brothers also spoke of attending Chautauquas at a pavilion in the Glen, which were held in the early 1900s, when the Glen also boasted a resort hotel and a dance hall.

Jackson said in recent years she has slowed down a bit, and no longer researches genealogy or local history, unless someone comes to her with a question. Her husband of many years, Ted, died in January of this year. After receiving the Senior Center award, Jackson said, “After Ted’s death, I’ve realized that I want flowers in my life. I consider this a flower.”