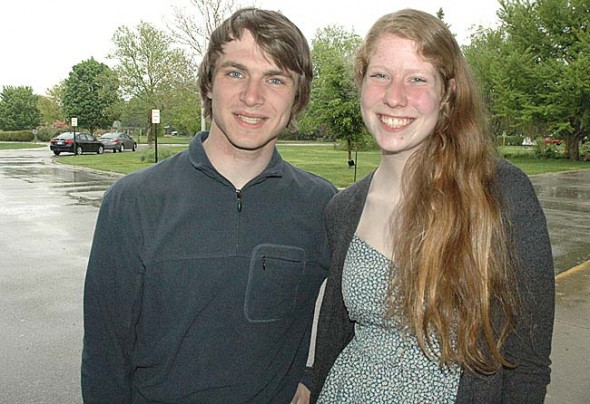 Lois Miller and Hunter Lawson are at the top of their class. Miller will be honored as the Yellow Springs High School valedictorian and Lawson at the salutatorian at the YSHS graduation at 7 p.m. on Thursday, May 30, where both will speak. (Photo by Megan Bachman)

Lois Miller has lived in the same house on Allen Street since birth, and has attended Yellow Springs’ schools since kindergarten. Hunter Lawson, on the other hand, moved here from Texas two years ago, enrolling as a sophomore at Yellow Springs High School. Both found their educational experience in Yellow Springs to be exceptional, and both excelled. Now they will be honored together at this year’s high school graduation with Miller as valedictorian and Lawson as salutatorian.

“Yellow Springs has a good reputation but I feel like people just see it as just small and public,” Miller said. “But there are a lot of standout teachers from first grade to 12th grade. You learn material in class but it’s not all teaching to the test.”

Added Lawson: “I enjoyed it [here] compared to other schools. I feel like it’s more open and intellectual.”

In a joint interview this week, the seniors praised the school and community for nurturing their academic interests and preparing them for college and beyond.

For Miller, the most poignant experience came last fall, when she received a letter in the mail from village resident Ross Morgan, whom she had never met, congratulating Miller on her cross-country accomplishments.

“I never met him but he’s so caring,” Miller said. “That really represents Yellow Springs … The school and the town are one, you don’t always get that.”

Miller got straight A’s through high school while setting records as the fastest female cross-country runner in YSHS history. At the state meet last fall she placed 21st with her best career 5k time of 19:12.27. Learning time management skills to juggle academics and athletics was critical to her success in both, she said, as was the support of the community.

“It’s really good to have that tight-knit community that’s really supportive of everything,” Miller said. “It’s not just the top students or the best athletes who are nurtured, it’s everyone.”

Miller gave back to the community through the school organization Students Promoting Inclusion, Diversity and Equity in Education, or SPIDEE, where she worked with sixth graders to address diversity issues. She also helped her father coach youth basketball. On working with youth she said: “They’re just starting to form opinions and values so I think it’s important to work with them on those issues.”

At the high school, Miller was grateful to take five Advancement Placement courses, which, while preparing her for college, were also her favorite classes. Highlights of her school career include discussing the “The Little Prince” in French class, reading AP English books and participating in School Forest, where students plant, care for and harvest a crop of Christmas trees each year. A teacher that stood out was Dave Smith, whom she called a “gem of Yellow Springs” and “the most amazing guidance counselor.”

Looking back at her academic career, it was a love of learning that carried her through, she said.

“Grades are important but they’re not the most important thing,” said Miller, who leaves high school with a 4.13 GPA. “The reason I’ve achieved success in my grades is I care about the learning.”

Miller plans to study math and engineering and to run cross country, indoor track and outdoor track at DePauw University in Indiana.

Lawson cruised through high school with just a single B, in an English class. He loved physics classes and is on a trajectory to perhaps become a physics research professor, he said. He’ll study math and physics at Ohio University in Athens.

“I love playing around with equations, how things are linked together,” Lawson said of physics.

Lawson first gained an appreciation for education in elementary school, when he and his sister decided to skip school one day. When his dad came home, he made the kids pick dove weed from the back pasture — an hour of weeding for every hour of school missed. The lesson was that, “This is the job you would have to do if you don’t get an education,” Lawson relayed. The message stuck.

“It made me appreciate being able to go to school,” Lawson said.

Through high school Lawson worked at the Yellow Springs Community Library where he helped to organize youth programs as part of a Teen Advisory Group. As much as the youth learned from the activities he put on, Lawson also learned a lot from them.

“They often have interesting views that you can only have when you’re young,” Lawson said.

Lawson enjoyed living in Yellow Springs for its friendly people, walkability and the abundance of artistic projects going on. Even though he’s not an artist himself, he came to appreciate art, he said.

On his academic success, Lawson said he tried to do well in school but wasn’t “the kid who asked for extra credit.” He simply enjoyed doing the work, he said.

“Grades are important to a certain extent but I do think there’s a little too much emphasis on that single number as a metric for judging people’s ability to do well in school,” Lawson said. “I don’t see myself as an overachiever…I enjoyed reading all the problems not related to grades.”

Both Miller and Lawson are members of the National Honor Society and received academic scholarships from their respective colleges. Miller has also won numerous awards including the Bausch & Lomb Honorary science award, the Rennsselaer medal for science and the Honda Ohio state math medal award. Miller and Lawson will speak at the YSHS graduation on May 30 at 7 p.m.