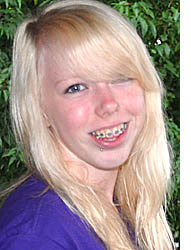 17-year-old Trista Lindstrom of Yellow Springs was killed Saturday evening when a car in which she was traveling was hit by a water truck at the intersecton of Clifton and Grinnell roads. (Submitted photo)

On Saturday evening, June 1, Trista Lindstrom, 17, was killed when her vehicle was struck by a water tanker at the intersection of Clifton and Grinnell roads. Lindstrom was the passenger of the vehicle driven by her friend Ashley Weyandt, 16, who walked away from the crash with minor injuries. The truck driver also escaped with only minor injuries.

According to reports taken from Weyandt and the truck driver by State Highway Patrol Sergeant John Lempcik, the two girls were stopped at the red flashing light in the northbound lane on Grinnell Road and failed to see the truck travelling west on Clifton. When their Toyota sedan entered the intersection, the tanker, which was empty at the time, plowed into the passenger’s side, sending both vehicles into a ditch. The time of the crash was 6:40 p.m. The sun was up, the roads were dry, and no circumstances that would have compromised the drivers’ abilities were identified, Lumpcik said.

“The driver just said she didn’t see the truck,” he said.

Trista is the daughter of Shannon and Scott Lindstrom of Yellow Springs. While she was recently home-schooled, she had until this year been a student at Yellow Springs High School.

Several neighbors have seen what they feel are “too many accidents” at that intersection. They believe that it is unsafe and that something should be done to correct it. Marianne Kettles, who has lived on the property at the northwest corner of the intersection for about a year, hopes Greene County will lower the speed limit on Clifton Road, which is currently 55 mph. And she would like to see flashing red lights in all four directions at the light (currently the lights on the Clifton Road side flash yellow).

“That young girl should not have died,” Kettles said. “The last accident was so serious, and it was the exact same scenario — they were aware of this.”

Sharon Hatfield, who has lived on the northwest corner of the intersection for about three years, also feels strongly that the intersection is not safe. She has seen three serious accidents there in the past two months, she said, which have all been similar in that the vehicle on Grinnell Road gets plowed or launched by another vehicle travelling at or above the speed limit along Clifton Road. The speed may well be 55, but she witnesses vehicles whizzing by at 85 “all the time,” she said. She would like to see the speed on Clifton Road reduced and perhaps other changes made to make the crossing safer.

But according to Greene County Engineer Bob Geyer, the county did make major improvements to the intersection around 1998, shortly after four teenagers were involved in a fatal accident there. In addition to the flashing lights, the county installed two sets of speed warning signs for Clifton Road traffic going both directions, and they installed large stop signs on both sides of Grinnell Road. The intersection is clear of trees and bushes, and there is ample sight distance looking both ways on Clifton Road, particularly to the east, the direction the truck was coming from on Saturday night.

The engineer’s office has logged two accidents at the intersection this year, including Saturday’s incident and one that included property damage. And according to preliminary research, one crash occurred there last year with property damage, as well as one accident with an injury in 2010. While the engineer will review the detailed reports in the coming weeks, Geyer said that the preliminary data doesn’t appear to warrant the installation of a traffic signal or four-way stop at the intersection, which could end up causing more accidents if drivers in the eastbound lane on Clifton Road are forced to stop just after cresting the hill.

A complete crash report from Saturday’s accident is still forthcoming, but according to Geyer, none of the evidence so far when evaluated against the Ohio Uniform Traffic Control Manual suggests that any changes need to be made to the intersection.

John Cannon, who grew up on the property at the northwest corner of the intersection and still owns and maintains it today, feels that any traffic alterations should be based on engineering data, not intuition. Absent the data, Cannon stated only his impression, which is that 25 years ago before the intersection was “improved” with lights and signs, drivers tended to be more cautious and travel more slowly. But now, because the orange light on Clifton tells them the responsibility is on the Grinnell Road driver, cars speed through with less care. The behavior is counter intuitive in some ways, but Cannon feels the same about the hill on Clifton, which some believe reduces the sight distance for the Grinnell Road driver (potentially bad), but also causes the Clifton Road drivers to slow down (potentially good).

“Changes should be carefully considered before they are implemented so that they don’t make the situation worse,” Cannon said.

Unfortunately, whatever happens going forward does not change the fact that a life was lost last weekend.

According to her friends, Lindstrom loved rap music, animals and children. She had a cactus farm in her bedroom. She was relaxed about getting her driver’s license. And she wanted to be a veterinarian or a pediatric nurse.

“And she was the funniest person I’ve ever met — she would say some inside joke and we would just start laughing,” Abigail Dawson said.

The Lindstrom’s house in Yellow Springs was the central hang-out location for the group of friends who gathered there nearly every day, said those who were there over the weekend supporting the family. Lindstrom’s friends all called her mother, Shannon, “Mom,” and some said they saw her more than their own parents.

Lindstrom grew up in Buckland, just north of Wapakoneta, with her mom, Shannon Sprague, and her adoptive father, Terry Morris, who died when Lindstrom was still in elementary school. When Sprague married Scott Lindstrom, the family moved to Cedarville and then Yellow Springs, where Lindstrom attended McKinney Middle School and Yellow Springs High School before deciding to home school. She was going to be a senior this year, according to her cousin Dani Carroll.

Carroll and Lindstrom spent every summer together at their great-grandmother’s house playing games Lindstrom made up in their clubhouse under the pool. They were the Rock and Roll Sisters Club, and they supported animal rights, once marching barefoot around Buckland for an entire week holding signs saying “Save the Ants, Don’t Wear Shoes.” At 12 years old, Lindstrom decided to become a vegetarian.

Lindstrom loved nature and hiking in Glen Helen, and she spent lots of time at the family’s campsite at Cowan Lake, driving the family’s golf cart blaring her favorite music, Dawson said. She also regularly sang and rapped to music by Tyler The Creator, Lil Debbie, Fall Out Boy and One Direction. She and her friends had planned to see the Lumineers in concert this week, and their goal was to earn money this summer to buy tickets to see Fall Out Boy, according to friend Camara Cros.

According to her friends, Lindstrom was a leader, but she could also be anxious, which is partly why she chose to home school. She was a devoted friend to many, and a loving sister to her two younger brothers, Zak and 3-year-old Aiden.

“She was my best friend,” several girls said.