Former basketball coach Charlie Coles­— A coach like no other 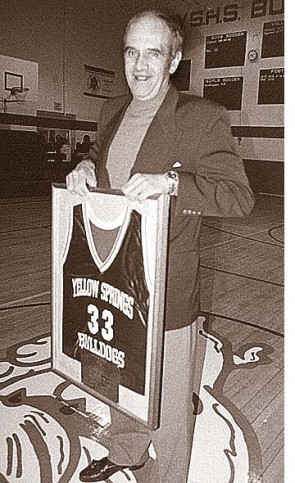 Local basketball legend Charlie Coles, a celebrated basketball coach at Miami University, died last week. Coles was honored at Yellow Springs High School in 2000 with the retiring of his jersey #33. He broke records in single-game and season scoring while at Bryan High School in the late 1950s and led the 1972 YSHS boys team to a district title. (Photo from the News Archives)

Charlie Coles will be remembered as the longtime Miami University men’s basketball coach who earned more wins than any coach in school history. But before he became a college coaching legend, Coles was a basketball hero in Yellow Springs, where he set scoring records, coached the 1972 team to a district title, and, in the words of one local, “inspired a generation of basketball players in Yellow Springs.”

Coles died last Friday at his home in Oxford. He was 71. A cause of death was not immediately released, but friends said Coles had heart problems for years and several open heart surgeries. He retired as Miami’s head coach last year.

Born in Springfield, Coles played at Bryan High School in Yellow Springs in the late 1950s when he moved to town to live with his grandparents. Coles was the leading high school scorer in Ohio during his senior year, averaging 42.1 points per game, according to the Ohio Basketball Hall of Fame. During that season he scored 40 or more 15 times and never had less than 23 points in a game. He also holds the top four scoring performances in YSHS history, including a game against Springfield-Shawnee where he scored 65 points, according to former YSHS basketball coach Brad Newsome. Coles’ jersey number 33 was retired at YSHS in 2000 at a ceremony he attended.

“I would say hands-down Charlie Coles was the best scorer we had,” Brad Newsome said. “But it’s deeper than just basketball. He was the best coach, too, and one of the best people to come out of not just Yellow Springs but this area.”

After Bryan High, Coles was a star player at Miami University from 1962–65, averaging 18.5 points per game as a junior. In 1969, Coles returned to Yellow Springs after coaching in Cincinnati and Springfield, and was the team’s head coach for three years. Coles got his team in shape, taught them to take pride in playing defense and packed home games with the exciting atmosphere he created, Bomani Moyenda, a member of the 1972 team, said.

Alton Brisbane, another player on the 1972 team, said the team’s success was because Coles held his players to high standards. Phillip Newsome remembered a time when Coles threw his clipboard on the floor during practice in frustration over a player’s effort, only to take that same player out for a steak dinner that evening for improving his performance.

“We never took it personally. We understood that he was just trying to make us play better,” Newsome said.

And during a tenser social climate, when spectators would yell racial slurs at the mostly-black YSHS team from the stands, Coles protected and buffered his players from the brunt of the comments, Brisbane said.

After Yellow Springs, Coles left for Michigan to coach at Saginaw High School. The players still at YSHS were heartbroken, but Coles stayed in touch by writing them letters, Coles looked back on his years in Yellow Springs fondly, according to Brisbane.

“He always would tell us that we were the best team he ever coached — even through his college teams he had better talent,” Brisbane said.

During his 16 seasons at Miami, Coles was a two-time Mid-American Conference coach of the year and won three MAC championships. He retired with 263 wins at Miami, the most in school history.

Funeral services for Coles will be on June 13 at Millett Hall on the Miami University campus. Visitation hours are 9 a.m. to 12:30 p.m. and a service begins at 1 p.m. The Coles family is asking that donations be made to the American Heart Association or to the organization Coaches vs. Cancer.