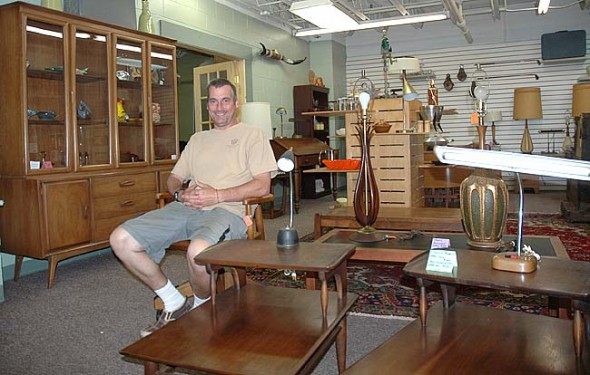 Terry Fox is the owner of the new store Atomic Fox, at the former survival store location in Kings Yard. The store specializes in mid-20th century furniture and housewares. (Photo by Megan Bachman)

A passion for 1950s-era furniture

When Atomic Fox owner Terry Fox spent weekends with his grandparents as a child, he didn’t expect those experiences to fuel a lifelong interest. His grandparents’ house, furnished with what is commonly known as midcentury modern furniture, introduced him to the style and he credits that exposure to what has become his passion and, most recently, his livelihood.

Opening just three weeks ago in the back of Kings Yard, Atomic Fox specializes in midcentury modern furniture and household items, ranging from chairs and end tables to blenders and kitchenware. The shop name refers to his surname and also the 1950s, or the “Atomic Age,” since much of his stock comes from that era.

“I’ve always loved what is frequently called ‘retro,’” he said, “and whenever I saw this style of furniture, I just gravitated towards it. I attribute it to growing up around my grandparents’ house and that’s the stuff they owned.”

Although opinions about the precise time period vary, the midcentury modern design aesthetic is generally found in furniture and household items from the 1940s though the early 1970s. Generally characterized by simplicity, clean lines and experiments with the newer technology of the time (such as plastic or bent wood), midcentury modern furniture has experienced a resurgence in popularity over the last two decades which Fox hopes to capitalize on with his store.

“For younger people, these are their antiques,” he said of the aesthetic. “And while you can buy a similar look at Ikea, as people hit their 30s or 40s, they might want the real thing, and something of higher quality. That’s what I’m here for.”

For the past 25 years, Fox has been collecting items from the time period and what started out as a hobby gradually became a source of income for Fox and his family.

“I started going to garage sales and I would buy stuff. If my wife didn’t like it, I would keep it and store it in the garage,” says Fox of the beginning of his collection. Eventually the collection grew and he rented a 2,000 square foot warehouse in Springfield to house it. From there, he could sell things through eBay and Facebook and make enough money to help pay for vacations and travel.

“Sometimes at someone’s house, I’ll ask them about a piece of furniture in their living room and they say ‘Oh, you should see what we have in our basement,’” he said. “I look online to see what’s popular and what people are interested in, but I also go for the utilitarian aspect. I want people to be able to use what they buy in my store.”

“This is from the 1970s,” he said, using a blender as an example “but it still works and it’s great quality. You can easily bring it out for parties to make margaritas and it won’t break on you.”

In addition to his interest in midcentury furniture, Fox has also had a long standing desire to open a store in Yellow Springs, occasionally looking for space in the village over the last two decades. When his wife informed him that the building that formerly housed the survival store in the back of Kings Yard was available, he decided to act on it immediately.

“I jumped in my car and came over right away,” says Fox, and in just a few weeks he had signed a lease, painted the interior and opened in time for Street Fair in June.

“I’ve always wanted to come here,” he says of doing business in Yellow Springs. “I know the culture here and I felt like the time was right for a midcentury modern store in town.”

“I am completely excited about this,” he said about the opening of the shop. Having moved to town from Denver, where shops such as Atomic Fox are common and very popular, Melamed is pleased to have a local option for this kind of aesthetic.

“It’s between Ikea and the world of high design furniture. I like it because it tends towards simplicity and speaks to actually designing with function in mind,” Melamed said.

This is the kind of response Fox is hoping to see from the town, since he envisions his store as primarily serving a need in the local community.

“This is an investment for locals,” he said of his enterprise “They can sell their things on consignment and also find things they like. Serving the community with what I have is what I feel strongly about.”