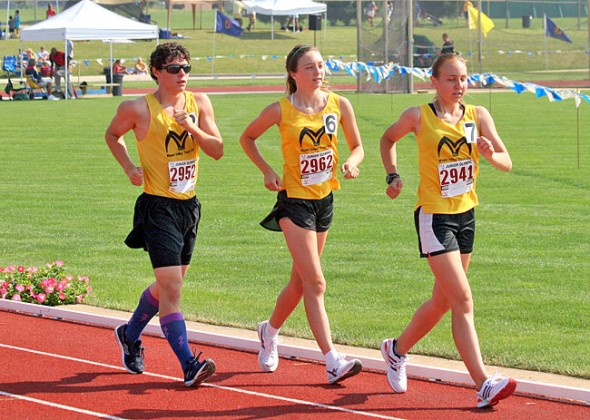 Forty one athletes from the local Miami Valley Track Club performed superbly in their events at the recent Ohio Junior Olympic Championships at Cedarville University to advance to the Regional Championship in Michigan on July 13 & 14.

The youngsters had to finish in the top six in their event to advance to Olivet College, where they will meet the top six from Kentucky, Michigan and West Virginia for a spot in the National Championships in Greensboro, North Carolina.

In the 11–12 division the girls advancing were Taylor Ewert with wins in the 3,000m run and the 1,500m Race Walk, Juliann Williams in the 1,500m and the 3,000m runs, and Camryn Rakestraw with a win in the High Jump. The boys advancing were Dane Muenchau and Ashton Gueth. Muenchau advances on the basis of a second place leap in the high jump and a fifth place finish in the 1500m run. Gueth qualified with a fourth place in the high jump and a sixth in the long jump.

In the 13–14 division the five girls from the local club qualified. Triple gold medalist Sarah Swisher advanced in the three throwing events, Shot Put, Discus and Javelin. Kaliyah Fulton soared to first in the pole Vault to earn her trip. Olivia Maxwell took first in the 800m run and a third in the 100m hurdles. Kennedy Graves was first in the 3,000m Race Walk and third in the high jump. The final qualifier was Alora Penner with a second place finish in the 3,000m run.

In the 15–16 division the competition really tightened up with many of the top high school athletes from around the state joining the fray. Yet four local girls qualified including Emily Belovich with wins in both the 3,000m Race Walk and 3,000m runs. Charlotte Walkey advances with a second in the race walk and a fifth in the 800m run. Nicole Stephens advances with a win in the 100m dash and second place finishes in the 400m dash and the high jump. And Dani Worsham qualified with a third place finish in the race walk.

In the 15–16 guys Cameron Haught leads the qualifiers with a win in the 3,000m Race Walk and a fourth in the steeplechase. Oluka Okia joins him with a second place in the high jump and a 6th in the Pole Vault. Bryant Walter advances with a sixth in the 100m dash along with Keyan Watson’s second in the 200m dash and Tyler Mougey sixth place finish in the 800m run. The big winner in that age group was long time Miami Valley Track Club athlete Ben Ewert. Ewert was a triple gold medalist, winning both the 1,500 and 3,000 meter runs and adding a victory in the 2,000m steeplechase in his first attempt at that event.

In the 17–18 division for women it was Niki Worsham capturing the gold in the 3,000m race walk to join Africa Strodes and Natassia Roberts in advancing to the Regional Championships in Michigan. Strodes advances in teh 100m dash and the Long jump and Triple jump. Roberts advances in the Shot Put, Discus, Javelin and Hammer throws.

Track practices at the high school continue on Monday, Tuesday and Thursday nights in Yellow Springs in preparation for the club’s last home meet of the year, the 23rd Annual Miami Valley T&F Open. This competition is open to anyone 2 years of age and older. Entry forms are available on the club’s web site: http://www.MiamiValleyTrackClub.org