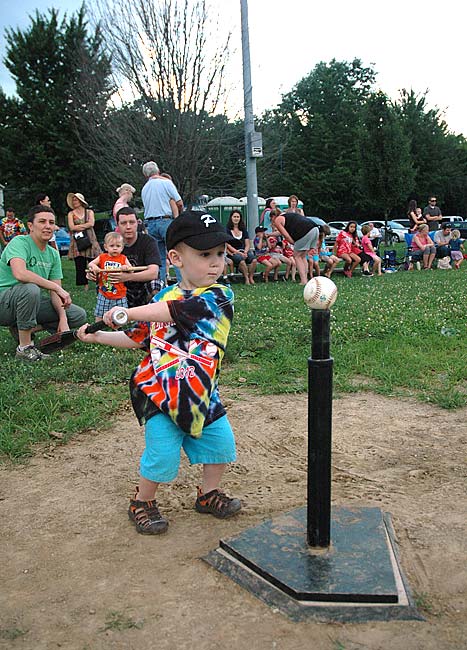 Kai Kingsley very much keeping his eyes on the ball at Friday night’s Perry Leauge. (Photo by Matt Minde)

Follow this link to read a second article on Friday night’s t-ball written by Sommer McGuire, a href=”#tball”>and be sure to view the photo gallery below.

After the equipment had been put away and the final exercises had been completed and the cheering was done and the kids had their pictures taken on the bleachers “for Coach Jimmy” and the closing crowd of about 30 children had spontaneously cheered, over and over, “PER-RY LEAGUE, PER-RY LEAGUE, PER-RY LEAGUE,” parents and kids lingered even longer, not rushing off for ice cream at the Corner Cone, but just wanting to stick close, thinking about Coach Jimmy and how much t-ball means to us. We just didn’t want to leave the field and each other. We’re a team.

But that isn’t how the evening began. It actually began days ago, when parents, friends and neighbors heard the news: Jimmy Chesire, coach of Yellow Springs’ Perry League T-ball for more than 25 years, fell while walking his dog near Ellis pond. He had been hurt badly, was in the hospital. It was scary. It is still scary. Coach Jimmy’s loved ones — so many — put their heads together to find out what we could do to help, how we could let him know he has our love and support, what we could do “for Coach Jimmy.”

It was sometime after that moment that all of these people who love Coach Jimmy started thinking about what he’d want us to do come t-ball night. A huge crowd, surely near 130 children, parents, grandparents, t-ball graduates and community members, seemed to have come to the same conclusion. They needed to honor the efforts he’d made on their behalf all these years. They needed to love, support and cherish the children of this community, just as Coach Jimmy has done, week in, week out, every summer. They needed to play ball.

So we did. It was a perfect, beautiful summer evening. Somehow — almost miraculously from my perspective — the bats and balls arrived on time, a table was set up with posterboard and markers for kids to send their wishes on to Coach Jimmy’s hospital room, and Amy Boblitt, who has experience pinch-hitting at times as t-ball coach under Jimmy’s tutelage, capably and confidently stepped up, whistle around her neck, and blew a loud, long, note. “Okay, t-ball players! Are we ready? Let’s go!”

And the crowd of youngsters — big and little, fleet of foot and babes in arms — lit out for the big flood lights where Coach always has them warm up. Coach Amy started them off with the usual calisthenics, but very quickly ceded her duties to the dynamic t-ball pro, 5-and-a-half year-old Caroline Tucker, who led the others in jumping jacks and nose-to-toes. When everyone was suitably loosened up (especially the dozen or so stiff-limbed parents who’d run out for warm-ups with their children), we were ready to play ball.

In the next hour and a half, at least 40 players fielded and hit, dug in the dirt, climbed trees and chased each other around the field. After all, as one wise child was overheard saying, it is not just to hit and field that kids come to t-ball. Through it all, Coach Amy, mother of the 4-year-old t-baller extraordinaire, Kian Boblitt, and his baby — wait! no! big toddler — sister Veda (who now hits and runs with the big kids), announced the hitters, helped with “the stance,” and gave high fives (“And five more. And five more! And five more!”) to kids as they crossed home plate.

It was dizzying trying to keep track of these kids — how does Coach Jimmy do it? I asked myself a thousand times — as they ran and hit and rounded the bases and caught balls and threw them. But then I realized, slowly, just how he does it: these precious, beautiful, amazing young human beings are absolutely unforgettable. There were the 2-year-olds, just beginning to come into their own as players, like curly-haired Maggie Bullock, who literally rolled around on 2nd base, where her dad Ben was stationed all night; Lucy Shows-Fife, who dominated the clover patch in left field; and Kai Kingsley, who couldn’t get enough of hitting the ball (and boy, could he hit!). Henry Babb, also 2 years old, was a more cautious hitter; dad Mark was right there, hitting with him, running with him, helping him learn, grow and succeed.

Then of course there were the big kids, right in the “sweet spot” of Perry League t-ball — the pros. These kids, who really know what they’re doing, included veteran players Reili Kingsley, 5, whose long, long legs could really get her around the bases; 6-year-old Teagan Hayes, a true slugger with the most amazing, lost-one-tooth smile ever; and Sammy Trelawney-Cassity, 7, who along with bigger kid William Hale, 8, worked the infield barefoot like a master.

Some kids were even bigger, like 9-year-old Marissa Goodman, who had to raise the tee to maximum height before she could give it a grand-slam smack; 8-year-old Sophie Clouse-Taylor, whose grace, patience, and generosity scream “future coach” to me; and Tristan Campbell, Perry League graduate and big brother of the intrepid, 6-year-old t-ball-player Mia, threw balls from the sideline.

Kids of all ages laughed, cried, played through injuries and promised to come back next week. And so did the parents. Could we do this without you, coaches and helpers? Amy Boblitt, Jeff Kingsley, Chris Hamilton, Laura Bauer, Chris Tallet, Scott Tucker, Anthony Fife, Nacim Sajabi — and all of you who I’ve not been able to name, thank you. Thanks from all of us.

As Coach Jimmy always writes: “that’s the Perry League, Yellow Springs’ non-competitive, beginner’s baseball program, the village’s t-ball program, for all our community’s children regardless of race, color, creed, national origin, ethnicity, ability or disability, sexual or spiritual preference or orientation. We welcome all the community’s children, girls and boys, ages 2–9. We’ll be out there at Gaunt Park every Friday night, from 6:30–8 p.m., for the next four Friday nights — till our final night, wiener roast potluck picnic trophy night, Aug. 9. Children can begin play at any time and there is no requirement to come every week. So, come when you can, come when you will. We’d love to have you, we really and truly would.”

*Geneva Gano, professor of literature at Antioch College, is filling in for Jimmy Chesire. See article below. A second article on Friday night’s t-ball by Sommer McGuire will be online at https://www.ysnews.com.