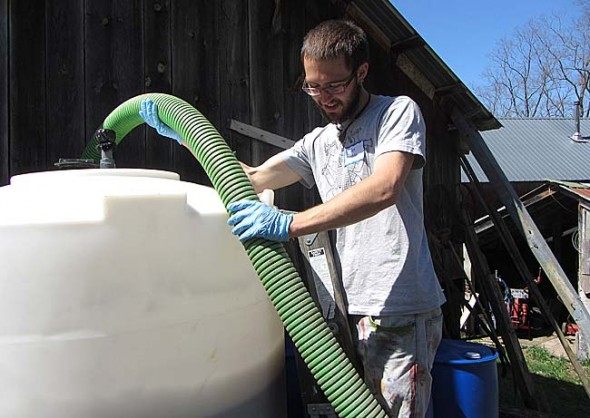 During Antioch College students’ most recent co-op jobs, Gabe Amrhein of Yellow Springs worked for the Rich Earth Institute in Brattleboro, Vermont, testing the use of urine in agricultural applications. (Submitted photo) 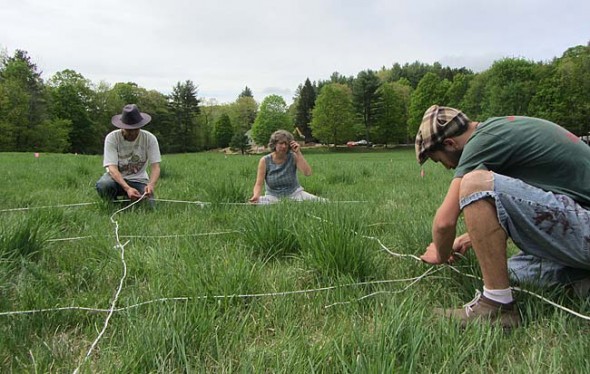 What do toilets and politics have in common? Potential metaphors aside, they both figured prominently in the recent co-op placements of Antioch’s first-year students, who returned just a few weeks ago from their first Antioch co-op experience.

Gabe Amrhein of Yellow Springs worked with the Rich Earth Institute in Brattleboro, Vermont, researching the potential of human urine to work as fertilizer for agricultural purposes.

“A lot of people are rethinking how they look at food from the input side, but not many people are looking at the output,” he said of why he found his co-op topic compelling. “Our sewage systems are really wasteful and outdated. People don’t realize how much is wasted with toilets, both water and potential fertilizer.”

In order to address the issue of output, the Rich Earth Institute, a nonprofit research institution, collects human urine and designs and executes experiments to learn more about its potential use for large and small scale farmers. For his co-op, Amrhein participated in all aspects of the organization, from public relations and the “Urine Brigade” (which collects urine) to building and setting up equipment for experiments.

“While I was there, I learned a lot about chemistry and biology through field testing,” said Amrhein. “After high school, science was kind of dead to me but this really sparked an interest in science again.”

While Amrhein was building equipment to solar pasteurize urine, his classmate Eric Rhodes was teaching a course on U.S. politics at Caterham School, a boarding school in Great Britain. After studying there through a fellowship program in 2009, Rhodes returned to assist his former teachers in the politics department in exchange for room and board.

“One of the professors was getting ready to leave for another position, so he asked me to teach the Introduction to American Politics course,” said Rhodes. “I designed my own curriculum and was basically thrown into it. I had to stumble and find my way as the semester progressed.”

Although it was challenging at first, Rhodes feels that he learned a lot about what good teaching actually requires, from the extensive prep time to managing class time effectively.

“I was surprised by how thoroughly I had to prepare in order to teach something well,” he said. “I also learned about patience — it was okay if I didn’t make it all the way through my presentation because it was really about engaging their minds.”

A little closer to home, Cleo Van Der Veen spent her co-op in the heart of American politics, interning in D.C. for the Better World Campaign, an organization that advocates for U.S. funding for U.N. programs. Her responsibilities included making phone calls, helping to organize events, writing memos and updating Web pages.

“I read the Secretary General’s reports and was reading international news every day,” she said, in order to synthesize information for the Web pages. “It was a lot of learning in a short amount of time — just living in D.C. you have to learn a different language.”

Nonetheless, because the organization focuses particularly on U.N peacekeeping missions, by the end of her co-op she had developed something of an expertise in foreign affairs.

“There are certain subjects I’ll know a lot about for a while — I still follow the conflicts in Mali and Syria daily,” she said, and classmates have used her as a resource to explain the complexities of those issues.

This kind of connection between education and real world experience lies at the heart of the co-op experience, and indeed of Antioch itself. Created by Arthur Morgan, the co-op program is based on a philosophy of experiential education, in which more formal educational instruction is reinforced first through experience and then reflection on that experience.

In its current iteration, co-ops occur once an academic year and rotate through the quarters so that by the end of their education, each Antioch student will have had a minimum of four co-ops, each in a different season. According to Bridgeman, each co-op is accompanied by an online course designed to help students reflect on their experiences and followed up with a “co-op swap” in which students come together to share stories from their time away.

A few co-op placements, such as those at Tecumseh Land Trust or the Resource Center of Chicago, have been carried over from the former Antioch College, but many have not, according to Susan Eklund-Leen, dean of experiential education, and the lack of carry-over is mainly linked to the recession, which has made it difficult for many organizations to fund a co-op student. Some positions formerly held for an Antioch student are now filled by an employee or have been eliminated.

So the revived college is creating a new stable of co-op jobs, following leads provided by community members and college alums or researching potential sites online. According to Bridgeman, like the former co-op structure, the eventual goal is to create placements in organizations that are continually filled by an Antioch College student.

“We’re looking for experiences that will be educational and give exposure to an area where a student might not know anything,” said Richard Kraince, dean of cooperative education, about the criteria they use when vetting a potential position.

“It needs to be a safe environment, but also one where students are going to be stretched, and have a different or bigger view than they had before,” agreed Bridgeman.

The college is also trying to find placements that offer some form of compensation to the student — be it through a stipend, a small salary or room and board, so that all students, regardless of their financial circumstances, can have access to the life- and résumé-enriching opportunities that co-op presents.

“I realized there’s so much more to cheese making than I ever thought there could be,” said Parlin. “At first I thought, ‘I’m never going to learn how to do this.’”

However, over time, Parlin improved her skills and by the end her cheese rounds looked as neat as her employer’s.

“I learned a lot about myself,” she said of her time at Young’s. “I could do things that other people can’t — I’m the only girl there who can make cheese.”

The challenge of the unfamiliar was an important criteria for student Clara Strong, who spent her first co-op herding sheep and helping out a family on the Black Mesa Navajo reservation in northeastern Arizona.

“I really wanted something that was very far from academia,” she said, “something entirely outside my comfort zone, surrounded by people who think in completely different ways than I do.”

Her work on the reservation, where she lived with two Navajo women — one of whom didn’t speak English — in a house with no running water and very limited electricity, definitely fulfilled that goal.

“It was really hard at first, and I definitely felt like an outsider coming in,” said Strong. “I was still an outsider when I left, but less so. There was definitely some trust there.”

Perri Freeman, a second year who finished her co-op in April, also confronted issues of difference and otherness during her time in Mexico, where she worked at a community center for street children in San Cristóbal de las Casas in the southern state of Chiapas.

Freeman helped develop and give workshops on issues such as domestic violence, sex education and immigration — topics that, while difficult, affect the children in their daily lives.

“It was emotionally very intense for me,” she said of the experience. “It was so hard to see kids who aren’t getting enough to eat, or 14-year-olds who come in hung over. Whatever systems that are in place to take care of them are completely failing them,” and many of the children knew people who had died because of lack of access to proper healthcare or clean water.

While profoundly difficult, Freeman’s time in Mexico has only served to deepen her interest in history and education, since history can help contextualize such situations and education has the potential to help people overcome the challenges of poverty.

“I’m even more aware of class and privilege,” she said. “Which is so important when looking at education. [My experience] made me even more motivated to help, but at the same time you’re like ‘Wow, this issue is immense.’”

One Response to “Antioch College students stretch in co-op jobs”