Antioch University leaders have hired Dr. Karen Schuster Webb as the new president of Antioch University Midwest, they announced this week. Dr. Webb will begin serving as provost and vice president of academic affairs of the school on November 1 and will formally assume the presidency on Jan. 1, 2014. She replaces Ellen Hall, who first served as interim president and then president for the past two years. Hall plans to retire. 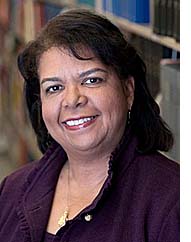 Dr. Karen Schuster Webb has been appointed president of Antioch University Midwest, and will formally assume the presidency on Jan. 1, 2014. (Submitted photo)

“Dr. Webb brings to our Midwest campus a wealth of experience from across the country and around the globe,” AU Chancellor Felice Nudelman stated in a press release. “She has significant experience working with adult learners, building partnerships in the community, creating meaningful academic programming and fundraising. She also cares deeply about the mission of Antioch University and is an example of an individual who has lived this mission through her work, leadership and service.”

Since 2000, Webb has worked for Alliant International University, a private nonprofit with campuses in California and abroad, first as professor and founding dean of the school of education, and from 2009 until the present as associate provost for community engagement. Alliant was recognized as one of the top 10 schools nationwide in providing both undergraduate and graduate degrees to minority students.

In an interview on Tuesday, Webb said that AU Midwest’s mission of broadening access to education was one reason she wanted the job.

“It’s an extraordinary opportunity to join the AU Midwest community,” she said, stating that she has “long admired the mission of AU Midwest, in particular to provide innovative education with excellence to adult learners.”

What’s innovative about Midwest is its focus on offering individualized masters and bachelors degrees, she said, along with providing programs in response to market demand, such as health care, education and business.

She will bring to the job the personal qualities of “enthusiasm, energy and a repertoire of strategies to address real world problems,” Webb said, stating that in her career she has learned to “see multiple pathways to problem solving” and encourages collaboration and partnering with other entities.

“I enjoy creating and building,” she said.

According to the AU press release, Webb has been a leader in her fields of study and spoken at national and international conferences. She has published widely in the fields of urban education and teaching, bilingual education and speaking and writing. She also currently serves on six boards and as the World Council of Curriculum and Instruction’s representative to the United Nations Department of Public Information.

Webb, who grew up in Virginia and Nashville, Tenn., now lives in Alameda, Calif. She has not decided where she will make her home in the Miami Valley area, she said.

“I’m thrilled to be joining the Antioch University community,” she said, and “am looking forward to getting to know everyone and working collaboratively.”