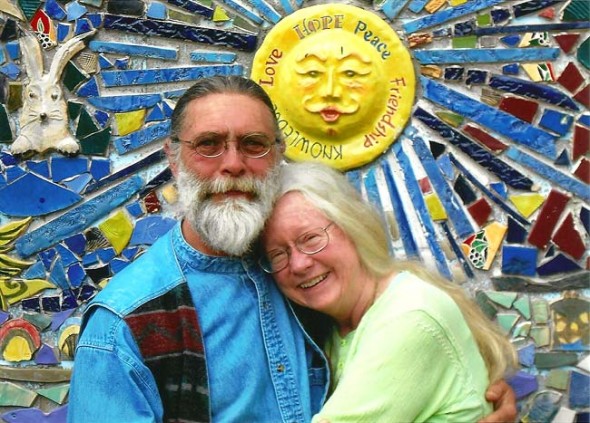 Just as 1960s counterculture icon Timothy Leary famously told fellow hippies to “tune in, turn on, drop out,” a couple of self-described “New Age flower children” — local holistic health practitioners Douglas Klappich and Deborah McGee — have some advice today for health and healing. “Tune in, tone up, bliss out,” with their combination of Ayurveda, massage, reflexology, Reiki and polarity therapy, they say, and those suffering from stress, muscle tension, digestive issues, poor circulation and other ailments can be cured.

“You tune in to what you need to have healed, work on it to tone it up, and then you should feel completely relaxed,” Klappich said of the tripartite approach.

McGee, 66, and Klappich, 67, moved to Yellow Springs a year ago after more than three decades of study and practice in alternative healing that took them from Ohio to ashrams, communes, co-ops and alternative meccas like Eugene, Ore., and Santa Fe, N.M. Along the way they trained with some of the most well-known holistic health doctors and gurus of the time during the resurgence of alternative medicine in the U.S.

Klappich received his yoga teacher certificate from Reverend Swami Satchidananda, the founder of “Integral Yoga” best known for his invocation at Woodstock, and in the 1970s worked with Ann Wigmore, who pioneered the modern use of wheatgrass; McGee studied Reiki with famous American Reiki master William Lee Rand, learned Ayurvedic cooking from Amadea Morningstar, and studied with Dr. Vasant Lad at the Ayurvedic Institute in Albuquerque, N.M. The couple opened early yoga centers in the 1980s in Eugene and in the 1990s in Columbus, well before yoga became so popular, and ran a successful holistic healthcare center in the Clintonville neighborhood of Columbus.

The couple has visited Yellow Springs once a month for the last 20 years for long walks in the Glen Helen Nature Preserve to “clear the cobwebs” and for the smiles and nods of friendly villagers downtown, they said. Last year they moved from Columbus to live among those of like mind and values.

“In Columbus, everyone is stuck in their minds,” Klappich said. “People are more relaxed here and are a little more silly.”

Silliness, along with loose rules around going barefoot, is something Klappich and McGee appreciate about the village. In that vein they organized BubbleFest last weekend, an informal downtown gathering for the sole purpose of blowing bubbles. They also put on an OM circle in April with about 50 chanters. Klappich and McGee were surprised that the villagers who showed up didn’t need any practice, but dove right into the chanting exercise known as the “sound of the universe.”

Klappich became interested in reflexology when, as a young boy, his mother gave him foot rubs. A native of Woodville in Sandusky County, he was a bowling alley owner, police officer and Marine Corps reservist before hitting the road in the mid-70s and ending up in Eugene. He found himself at Wigmore’s Hippocrates Health Institute, where he grew wheatgrass and taught yoga. McGee also started practicing yoga in the mid 1970s. A Columbus native, after getting her masters in English at Ohio State University and while teaching high school, she began frequenting a vegetarian restaurant.

“I felt so much better after I ate that food that it started my interest in alternative health,” McGee said. From her studies on food’s effect on the cells, McGee has learned that eating consciously and with gratitude can be as important as what food is eaten.

The couple met at a food co-op in Colorado in the early 1980s. On their first date they meditated and practiced yoga together. After moving to Eugene and running a wind chime business, they opened the Eugene Yoga Center in 1987 and got involved in Ayurveda and food healing. Soon the couple began to heal themselves and others. After many unsuccessful surgeries, Klappich finally cured his chronic sinus and migraines by giving up meat, he said. Yoga, which McGee said is the unity of body, mind and spirit, is an important daily practice.

“As I’m aging it keeps my muscles softer, less tense and helps me relax,” McGee said.

In her sessions McGee uses polarity therapy, a system of bodywork developed by chiropractor and osteopath Dr. Randolph Stone that focuses on balancing the body for optimal energy flow. She completed Registered Polarity Practitioner (RPP) training through the Ohio Institute for Energetic Studies and Bodywork in Columbus. She does her bodywork with “Reiki hands” she said, using words and symbols to to channel divine energy with hands-on healing technique. Reiki was developed by a Japanese Buddhist monk in the 1920s. McGee is a Karuna Reiki master, having trained with William Lee Rand and attuned as a Reiki master in Stonehenge in Glastonbury, England. She has also studied cranio-sacral therapy and shamanism.

During his consultations in Ayurveda, a system of traditional medicine native to India, Klappaich reads a new client’s pulse to diagnosis their basic constitution. Then he prescribes the foods, spices, herbs and lifestyle changes that suit them best based on the principle that “one person’s food is another’s poison.”

Using reflexology, Klappich said he can treat the whole body through the feet. By working with pressure points in the feet that correspond to different organs, energy flow and circulation are improved and the lymphatic system is cleared, Klappich said.

Both practitioners aim to not only treat their clients, but to help them heal themselves.

“I want to show people that they can heal themselves and their family and can get rid of the teacher,” Klappich said. “The body can heal itself quickly because it wants to be healthy.”