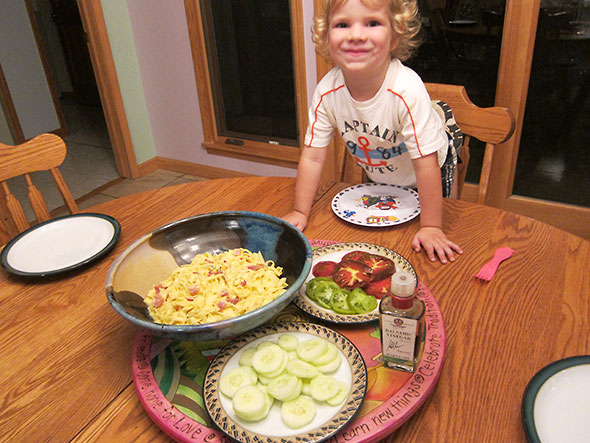 Spaghetti Carbonara. Those words leap off the page ever since we found them on the kid’s menu at the Meadowlark Restaurant. We always get the carbonara… or rather our children do. They both adore this pasta dish with its bacon and creamy cheese sauce, and the time is rare now that Jeremy and I get a bite for ourselves.

So, when I was sifting through the stack of Cook’s Illustrated at the Fairborn Community Library, the March/April 2013 issue drew me up short. Mid page on the magazine cover were the words Spaghetti Carbonara. Needing no further motivation, I checked the issue out immediately.

The teaser reads “Spaghetti Carbonara: Dump the Fat, Keep the Flavor”. The article itself promises a smooth stable sauce. Author Celeste Rogers warns that the recipe’s egg, bacon, and Romano cheese have a tendency to turn into a grainy gluey mess when combined in the wrong proportions. The easiest fix is to load the sauce with fat…lots of egg yolks, lots of heavy cream, and lots of rendered pork fat…but the author was going for something less overwhelmingly rich. I was looking for something simple that I could feel comfortable preparing for the family at home. 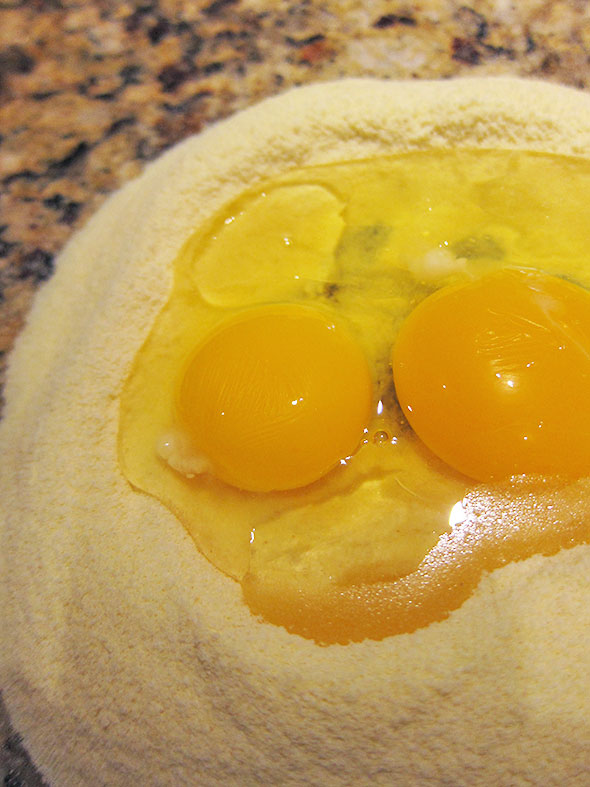 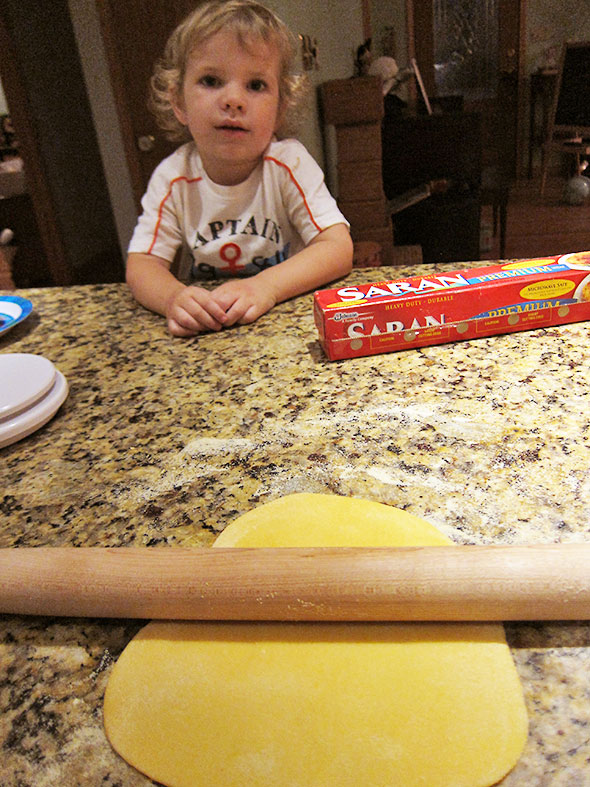 At a glance, I approved of the short list of staple ingredients. The only special item is the 2 1/2 ounces of Romano cheese. The rest are standards: a pound of pasta, 3 whole eggs plus one egg yolk, water, garlic, salt, and pepper. Oh, and eight strips of bacon.

I started by making the pasta. Luckily, we stock a lot of eggs. For the pasta, I needed three large eggs plus one egg white and 2 cups of semolina flour in order to make a pound of pasta. Preparing the pasta in this manner, I could hold back the leftover yolk for the sauce. I weighed the eggs (170 grams), then I made a well of flour weighing in at 255 gram—or 3 parts flour to every 2 parts of eggs. Next I added the eggs to the well with a tablespoon of walnut oil, and 1/2 teaspoon of salt. I combined the dough with my hands, kneaded for 10 minutes, then left the ball of pasta to rest on the counter for about an hour. 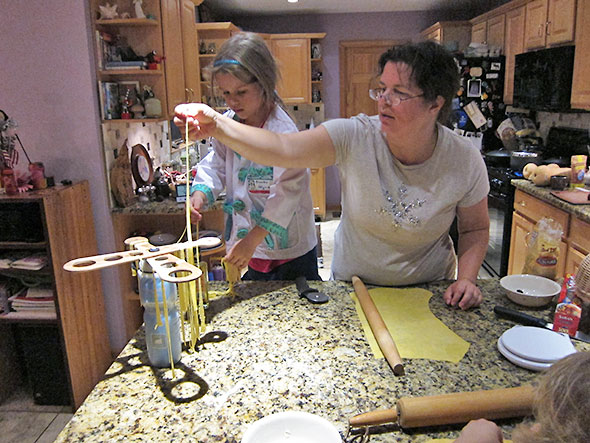 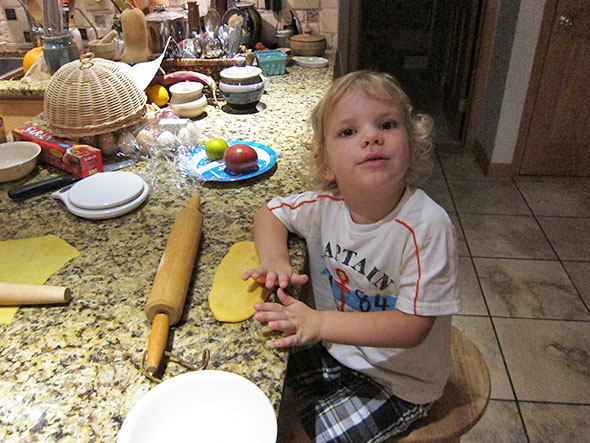 When the time came to roll out the pasta dough, the children joined me. I separated the pasta ball into four rounds, and we all began working the smaller rounds, each the consistency of playdough. My son and I both took possession of a ball and flatted our own on the counter ready for action. After a brief demonstration, my daughter took over the rolling pin from me while my son, drawn away from his own stretch of dough, sprinkled semolina on the countertop and pasta dough to keep them from sticking together. Starting with the rolling pin against her open palms, my daughter rocked the pin forward along her forearms stopping at her elbow. As the pasta sheet formed, I helped her by peeling the thinning sheet and rotating it a quarter after each diving pass or two. 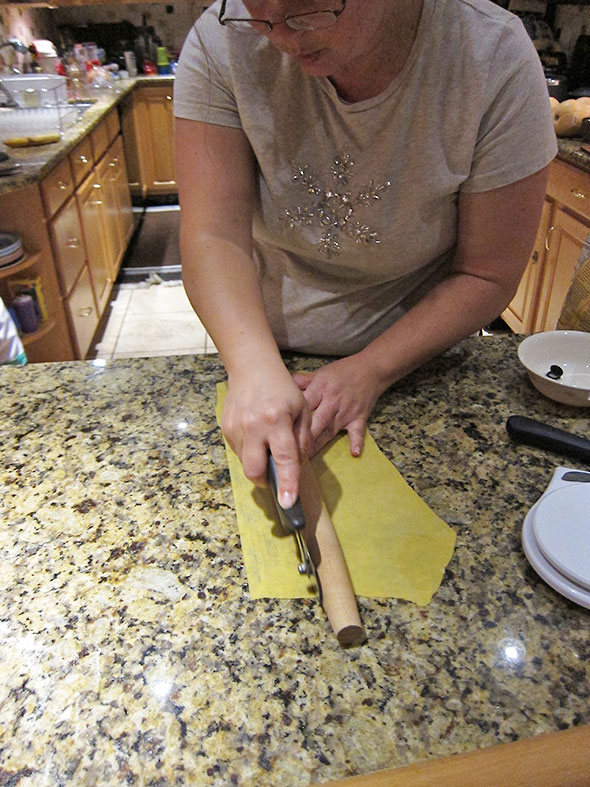 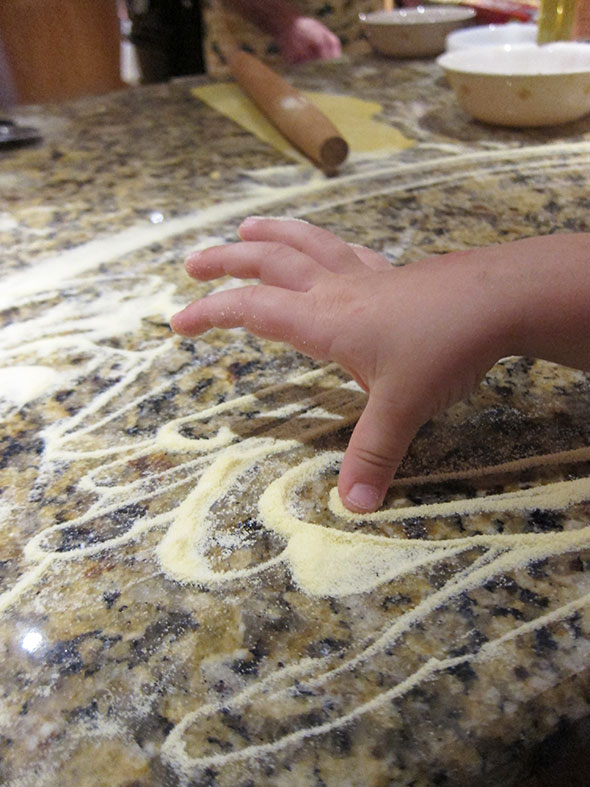 Once the dough was rolled to a thin translucent sheet, I took back the rolling pin and used it as a straight edge to cut the pasta into strips of linguini. 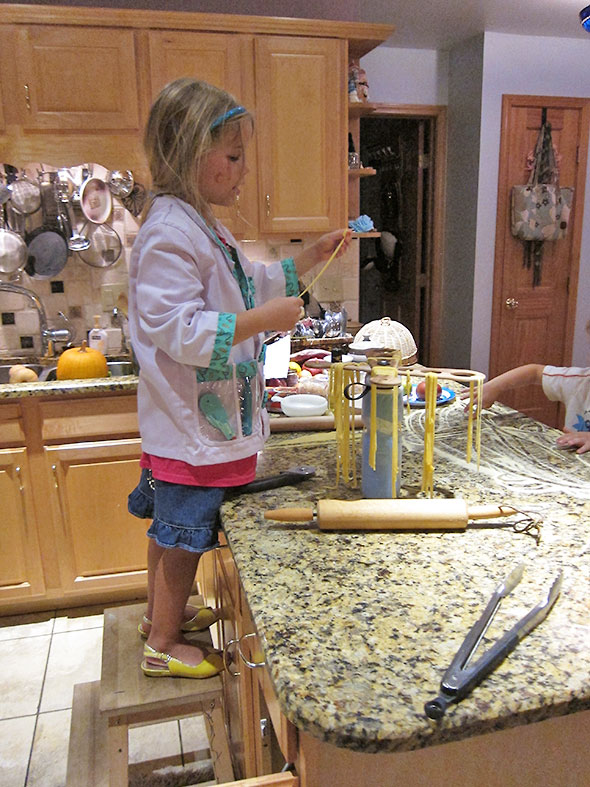 My daughter then pulled the strips off the counter and laid them over a drying rack. My husband joined us and began heating the bacon and two quarts of water on the stove—the bacon on a griddle and the water in a pot. With those two key elements set into action, he took up our camera to document the family project.

My oldest was clearly in charge. Her air of confidence was enhanced by the doctor’s coat she wore in lieu of an apron. Our son—her most serious intern—sat beside her mimicking her steps with the dough ration that he commandeered for himself.

The texture of the flour clearly entranced him. When we turned our backs to transfer the linguini strips from drying rack to boiling water, he poured a heaping cup of semolina over the cool granite counter and sifted indulgent fingers through it. Monitoring our young man a little closer, I chopped three cloves of garlic and the bacon strips at his hip while my husband and Doctor Linguini continued to cook the pasta. 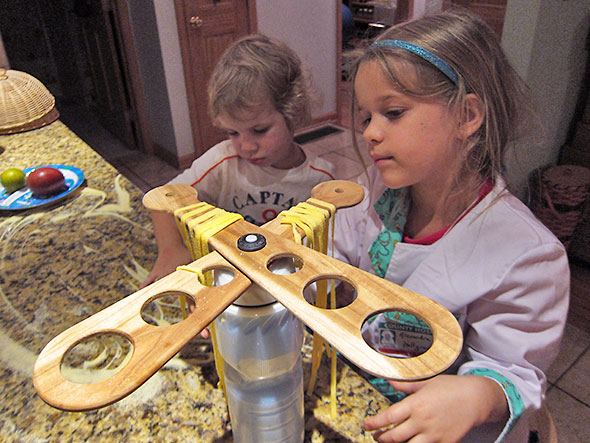 As the pasta started coming off the stove, I secured my knife and prepared the carbonara sauce. To add to the sauce, we reserved 1/2 cup of the starchy pasta water. We placed the water in the pasta’s serving bowl. In this reservoir, the pasta water served to heat the serving bowl and to keep the first batch of pasta warm while I gathered the remaining ingredients for the sauce. 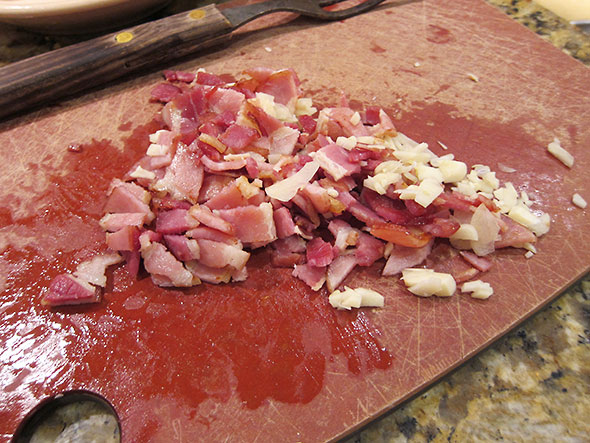 As the second batch of pasta finished up, I mixed together the main ingredients: three eggs with the reserved yolk, the cheese, the 1/2 cup of warm pasta water, and any bacon grease left on the griddle. I poured the bright yellow sauce on the hot pasta and tossed it in the warmed bowl. Then I waited. Sure enough the recipe stayed true and the sauce remained stable as it heated up against the pasta. I tossed in the bacon and garlic, salt and pepper then added the serving bowl—still warm—to our dinner table. 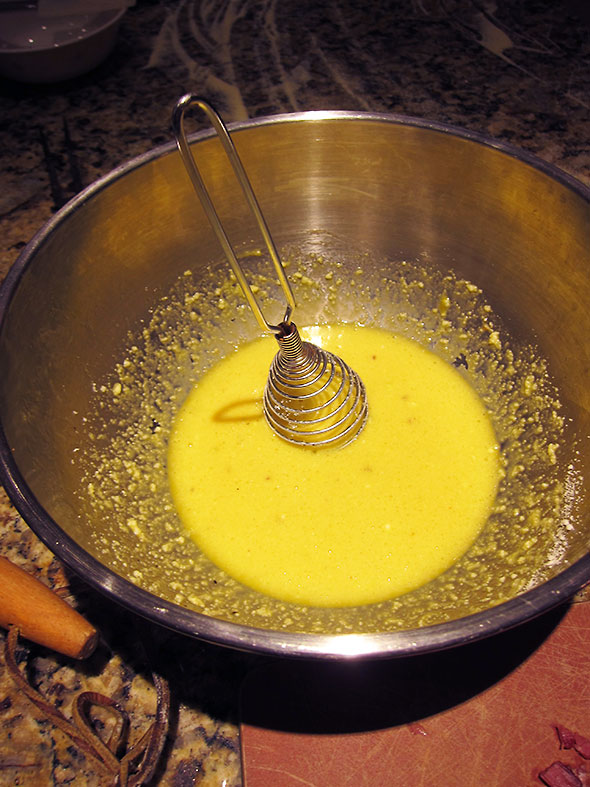 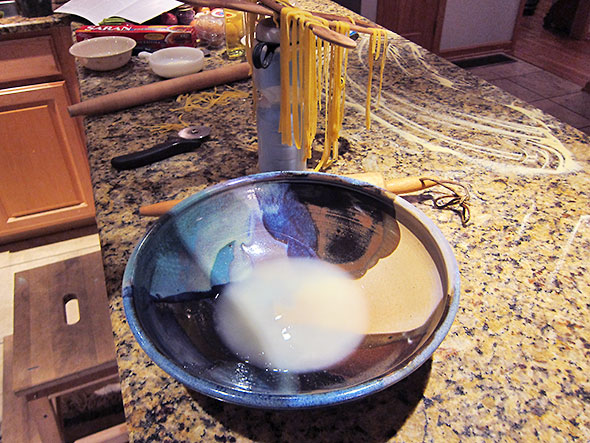 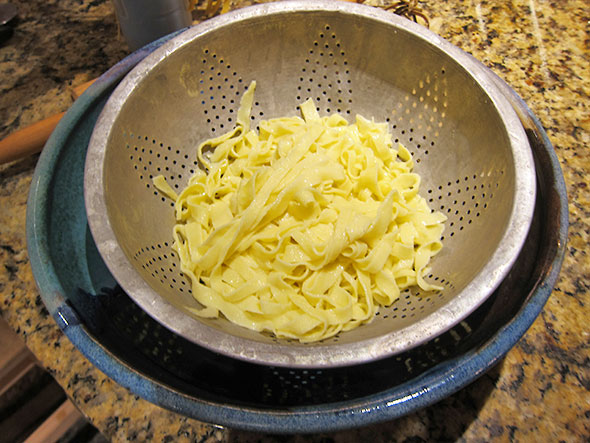 Jeremy had set the table and paired our meal with sliced cucumber and heirloom tomatoes. I opened a bottle of red wine—a spicy grenache from Australia—and we gathered round the table. 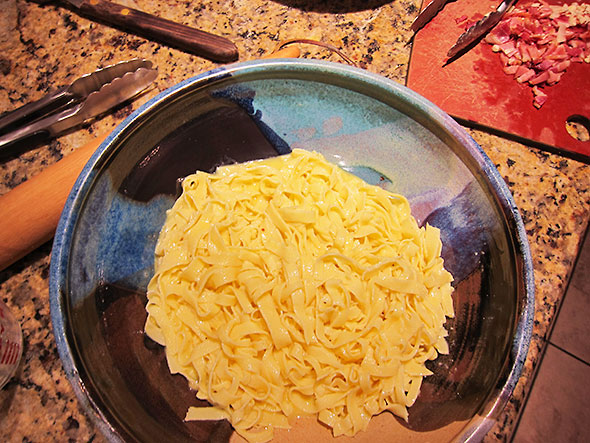 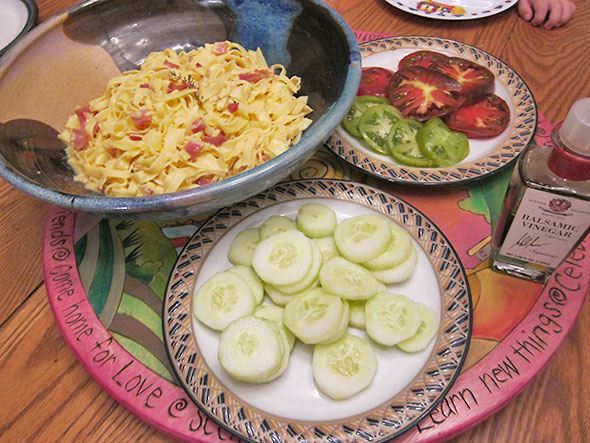 As we sat down and filled our plates, the children looked especially pleased with the meal and no wonder. They had fully participated in its preparation and accomplished much. Making pasta has become a family project, and I look forward to making this recipe for family dinners and boxed lunches well into the future. 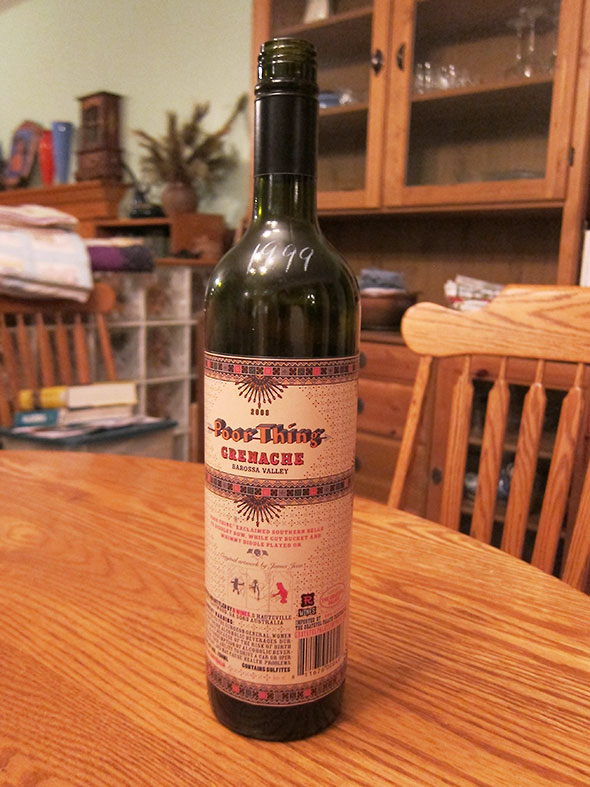 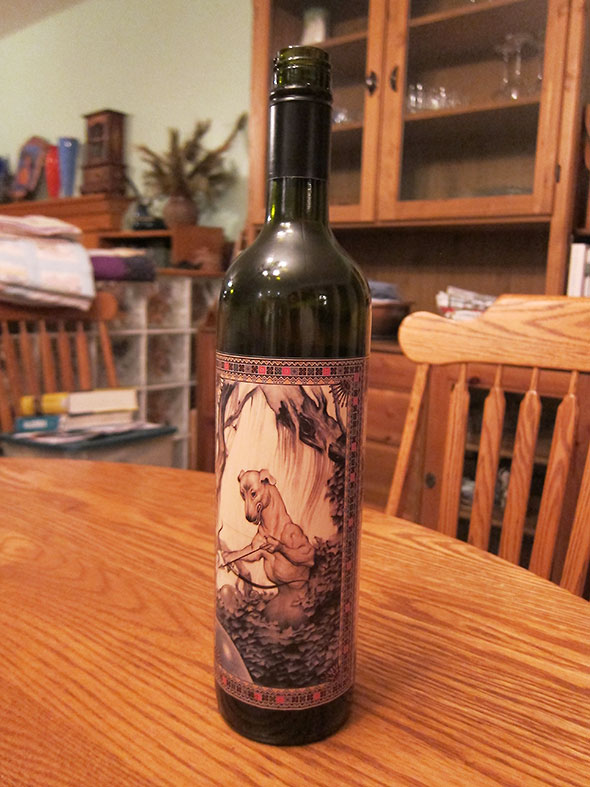 With this Roman dish, we are establishing a tradition—anchored by the meal’s bright color, interesting supple textures, gratifying nosh, and intimate preparation—that the kids will long remember themselves and enjoy.