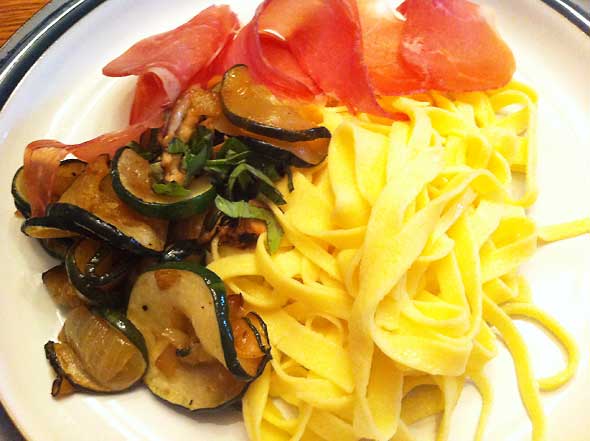 BLOG-Cooking with Head and Heart

Last week, the Antioch College Language & Culture Program hosted a screening of the mystical film Like Water for Chocolate. Of those who attended the screening, I wonder how many went home and reenacted the opening sequence. The niece of the main character demonstrates a cooking trick that she learned from her aunt by placing the end of an onion on top of her head. She balances the root there to keep from tearing up while she chops the remaining onion.

I saw this marvelous film in my most impressionable 20s. I was cooking a lot of stir-fries in the tiny kitchen of a 14 by 20 foot apartment and, until then, chopped a lot of onions through tears. The movie’s odd advise miraculously seemed to work, and I—with some self-consciousness—have been placing the onion end on my head ever since. I’ve mused that perhaps an upright posture reduces the tear ducts’ exposure to the stinging onion juices… but it could be that other forces are at work.

My own family’s story has been dramatic enough this week. The large roving bus that have been rolling past our house these past 5 years is now spiriting away my oldest to school. I road a bus to school myself, and the emotional force of its arrival—the massive Blue Bird #54 with roaring brakes and great flashing lights—still breaks into my dreams. Will I be ready? Will I leave something irretrievably behind? The school bus was the first iconic manifestation of consequence and irrevocable fate that I encountered. To my children, it is something benevolent and grand… a mystical coach offering passage to big kid-dom.

For the first day of Kindergarden, I planned my task of solace. As Like Water for Chocolate‘s heroine, I turned to cooking and, in my case, to making linguine pasta. After I relinquished our daughter to the public school system, I found comfort in making her favorite dish quietly at home and by hand. Linguine is simple to make though it requires a few tools. I recommend a large cutting board, rolling pin, pizza cutter, stock pot, and tongs. It is helpful to have a scale, a drying rack, and colander but not necessary.

Pasta is two parts egg to three parts flour. Assuming you don’t have a cooking scale, know that, generally, a egg weighs about 50 grams and a cup of flour about 120 grams. So, to achieve the proper ratio, combine two eggs with 1 1/4 cups flour. Add a little more flour when kneading if the formed dough is sticky. If you must, add drops of oil slowly to the dough if it is too dry and an absolute bear to knead. Challenge yourself in the kneading and, like I did, enjoy the therapeutic rhythm. Here’s what I did yesterday. 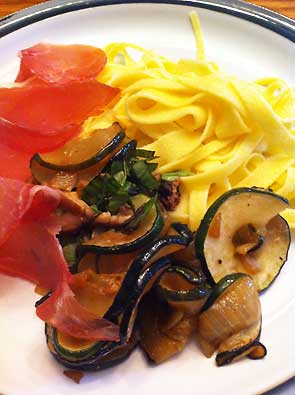 On a kneading surface or in a bowl, mound up the flour and form deep well in its center. Add the beaten eggs, salt, and olive oil but only as much oil as the flour well will hold. Mix together by hand and knead for 10 minutes. The dough may be sticky at first so add a dusting of semolina flour to the surface and keep kneading until the dough reaches a playdough-like firmness. From here, knead quickly; the strokes feel like swimming freestyle when I achieve the right rhythm. At the end of 10 minutes, add a drop of olive oil to the surface and roll the dough over the bead of oil to form a luminous ball. 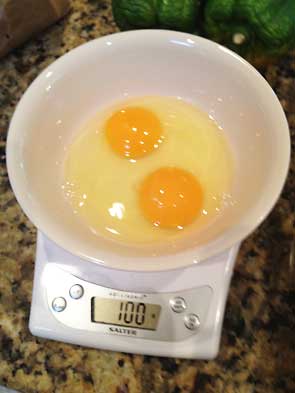 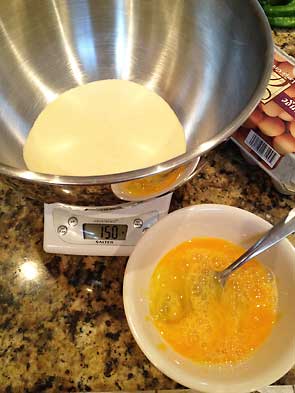 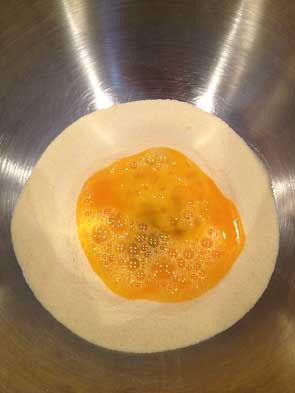 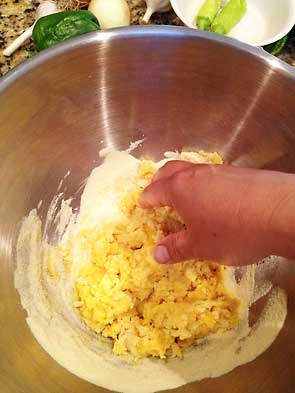 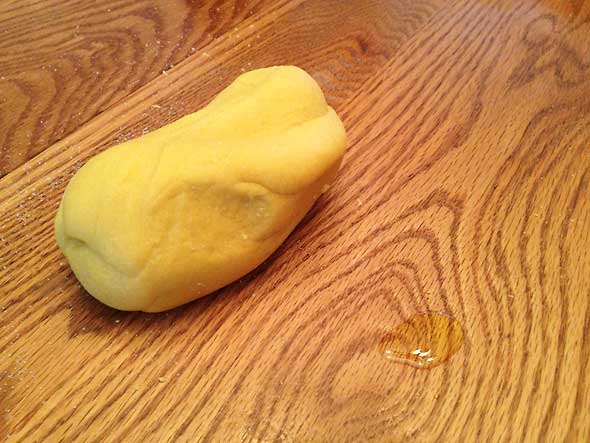 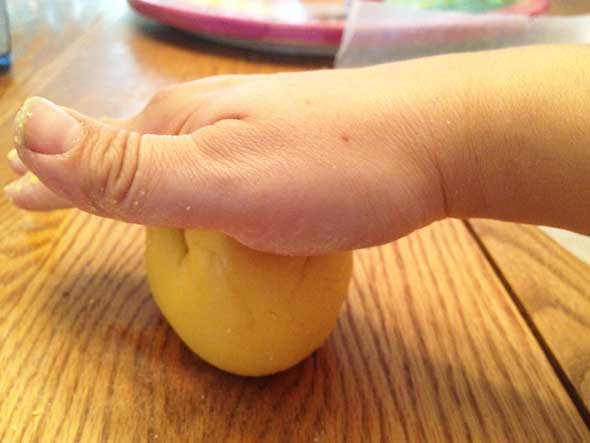 Fold into wax paper or plastic wrap and let the dough rest for one hour. Begin the prep for your pasta topping and, with about 10 minutes to go before you start rolling out the pasta, set a pot of water to boil on the stove. 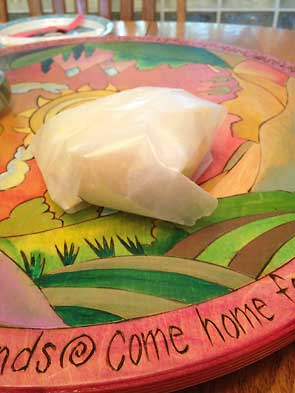 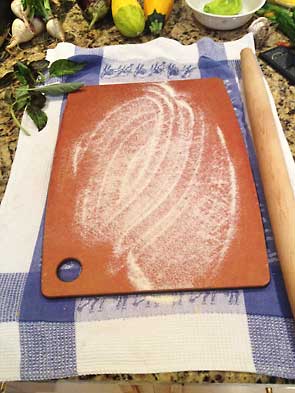 Stabilize a large cutting board with a towel and dust it with a little semolina flour. I cut the dough ball into four pieces and rolled each out separately with a rolling pin. Keep flipping the pasta after a roll or two adding flour as necessary to keep the dough from sticking to the pin and board. Turn the cutting board so you can spread the dough thin over the entire surface. Let the dough rest occasionally first making sure it is not sticking to the surface. Resting the dough about a minute helps you roll the dough thinner.

Continue to roll the dough until it stretches to translucent and shows the color of the cutting board through its thin skin. Next using the rolling pin as a straight edge, cut the pasta into pencil-thin strips with a pizza cutter. 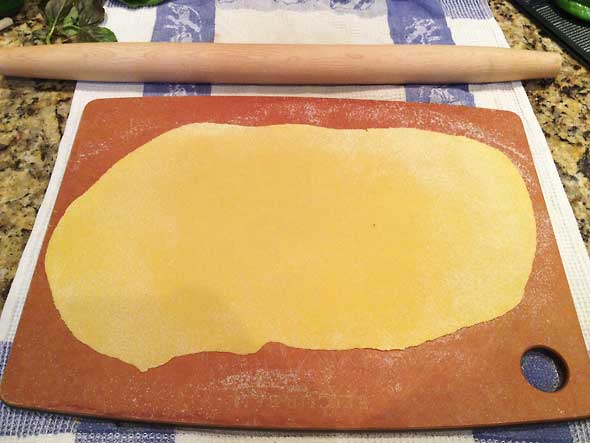 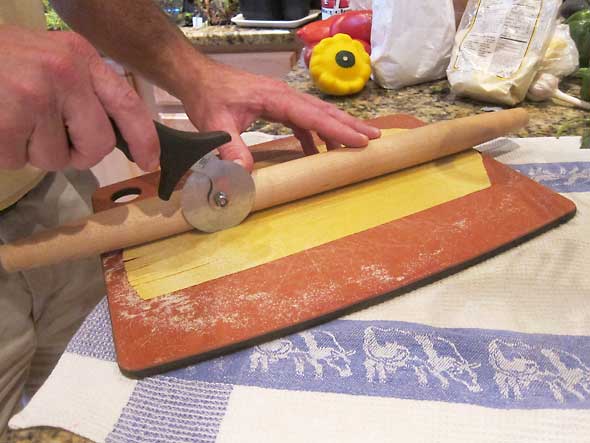 If you want to cook the pasta all at once, set the strips on a drying rack. My rack is a happy kludge of an old sports bottle with a flexible spout and two spaghetti measuring wands. On each wand, the hole that measures a single serving of spaghetti fits perfectly over the spout to my Polar Bottle from the Village Cyclery, 110 Dayton Street. 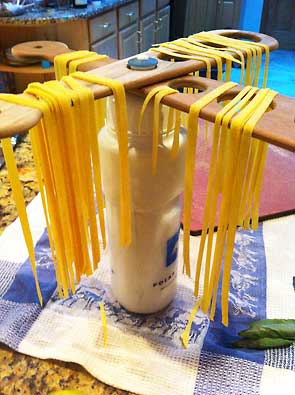 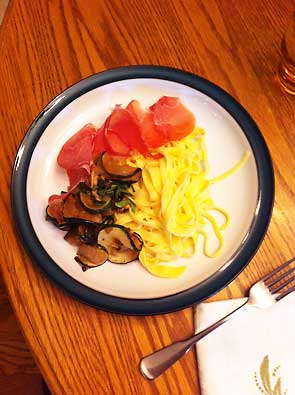 If you have no rack and no kludge, simply take the cutting board directly to the pasta pot and pull off the strips to dunk them in the boiling water.

Cook the linguine for 3-5 minutes. Stir occasionally. Remove the pasta using tongs and transfer to a bowl. Don’t worry about transferring a little pasta water with the linguine. The hot water will keep the pasta warm. Top with your favorite ingredients and serve immediately.

This linguine was the first that I have made with semolina flour; and, as the packaging suggests, it makes a fine quality pasta. Tom’s Market carries semolina flour and, because a little goes a long ways, it is a wonderful addition to the pantry. I use semolina flour often when making pizza dough or in breadings for vegetables and meats.

To top the pasta, I made a stir fry of onion, garlic, sliced zucchini, and mushrooms. Yes, while I cut the onion, its root top was kept balanced on my head. If there were tears in my eyes, it was over a little girl growing up fast and riding boldly into her future.