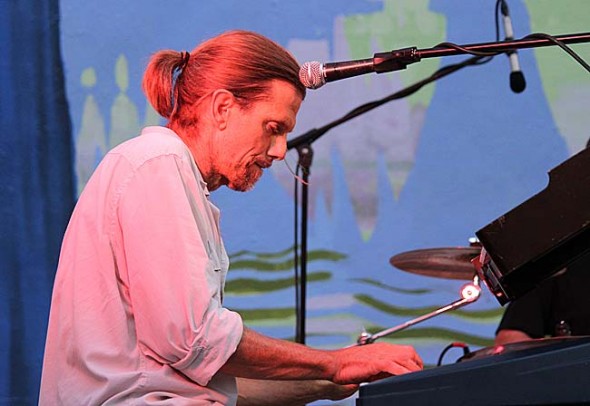 Local songwriter Carl Schumacher played at this year’s Blues Festival at Antioch College. An event to raise funds to cover Schumacher’s recent healthcare needs will be held at Peach’s Grill on Saturday, Sept. 28, from 1 p.m. to 2 a.m. (Submitted Photo by Juan-Sí González)

Musicians rally for one of their own

When Greg Dewey, on tour with Country Joe and the Fish at the time, first met Carl Schumacher, Carl was eating ice cream out of half a yellow melon, waiting to take a turn on one of the instruments set out before him. He was 10 years old at the time and had come to jam with his three older brothers and their friends.

“My brother Nick had told me about this young Schumacher who plays incredible jazz on the piano,” Dewey recalled. “This kid comes out, he was like 10 or something, and he indeed played beautiful stuff with jazzy chords — I was highly impressed.”

Schumacher grew up immersed in the music scene in Yellow Springs, later leaving to tour with Grammy award-winning blues singer Joe Lewis Walker, and recording music with Branford Marsalis, the Gospel Hummingbirds and Terry Adams of NRBQ. And when he returned to raise his daughter, Tess, here, he continued to write and play with as many combinations of musicians as possible. Whether on the road or at home experimenting with different sounds, it’s always been the community feeling Schumacher has searched for.

“I love creating music and interacting with other musicians — that’s my strongest sense of community,” he said.
The musicians themselves form the base of that community, and many of them have stayed in the area, growing their bands and morphing into new ones. Their unity extends beyond the good times, and traditionally when someone is in trouble, “we rally,” said Schumacher, who has played in dozens of fundraiser concerts over the years for friends who have fallen ill or on hard times.

This time it’s Schumacher who is down. After a long period of not feeling well, in May he was diagnosed with myelofibrosis, a pre-leukemia that doctors have recommended be treated with chemotherapy. But Schumacher feels cautious about signing up for quick-fix therapies and has sought help from both Chinese medicine and energy work practitioners, as well as physicians at the Cleveland Clinic. And he would like to travel to California to see an integrative specialist. Intuitively, Schumacher is feeling out his path to recovery, but as an uninsured artist, he is uncertain how to support his needs. While he may be eligible for Medicaid, the approval process is slow and doesn’t cover travel costs or alternative therapies. And having survived as a musician and contractor all his life, he is used to “making his own way.”

But the village’s music community is also used to supporting its own. And recently they have rallied to organize a fundraiser to be held on Saturday, Sept. 28, from 1 p.m. to 2 a.m. at Peach’s Grill. Featured musicians include, in order of scheduled appearance at the top of every hour, Noodle Factory, Jonny Dreadlocks, Gary Arnold and Stone Soul Soup, Emma Woodruff and the Ruffians, The Duke Dewey Quartet, Rob Heiliger, Jeanne Ulrich and the Devil’s Backbone, Spanish Tony Sanchez and Love or Drugs. If he’s feeling well enough, Schumacher himself will join the Devil’s Backbone.

Schumacher was trained early on the violin, the instrument his mother, Mary, played. Mary taught all of her children using the Suzuki method, learning music by ear instead of by note. And music filled their house in the Vale constantly, with Mary’s private students and chamber music groups, such as the well-known English Trio with pianist Ava English and cellist Shirley Mullins. He and his brothers were all drawn to the more popular Motown music of the 70s, such as Earth Wind and Fire and James Brown (Schumacher once came home from a James Brown concert at the Nutter Center with a piece of Brown’s cape) and going back to the Beatles and Jimi Hendrix and later Sam Cook, Muddy Waters and Johnny “Guitar” Watson. Schumacher eventually played many forms of music, including jazz with his former wife, Tucki Bailey, country with his own New Schu Band, and blues under the band Dr. Skillet with Byron Crews, Don Steinhilber and Steve Holser.

In his playing around the village, Schu­macher has performed a wide variety of covers, which he is very good at, according to Dewey. But Dewey has always found Schumacher’s style to be unique and his soft voice with an exceptionally high range an asset that he should share more publicly.

It turns out that Schumacher does have a lot of original music, both recorded and unrecorded, that he has either not yet finished or hasn’t publicized as widely as he would like. And due to a combination of self criticism and a long-held expectation that he would one day finally “make it” (which in his mind was to become a “hired gun for someone really successful”), he hasn’t made the final push on his material. Yet after finally admitting to himself earlier this year that he wasn’t feeling well enough to work, Schumacher has taken time to listen to and for the first time appreciate all the work he has created over his 30 years of playing.
“I feel I’ve been pushing ahead, not satisfied by my level of success,” he said. “But I’ve stopped measuring my success in this way, and now I’m marveling at my music…I’m redefining what success is.”

Schumacher can see that he has had an impact in the village and has helped create a strong community — by doing what he loves and feels he does best. His refocus has allowed him to appreciate those musicians and friends who support one another in music and life.

“It’s really moving to see all these musicians show up on my behalf,” he said. “I really have so much gratitude that people are going out of their way.”

As a musician who knows what he is — a keyboardist with a bent toward the soul side of blues — Schumacher also makes room for the eventual possibility of writing and recording more of his own music. He already started a new album with vocal support from Tess and his niece, Amelia. And now that so much of the music industry is about self recording and publishing, there are ways to distribute on the Internet from home in Yellow Springs.

“Who knows, maybe I’ll write that hit song,” he said, smiling. But he is quite satisfied being moved by the music itself and the story held within it.

“I’m playing to the story that’s being told, and I’ve got a lot of fire in me.”