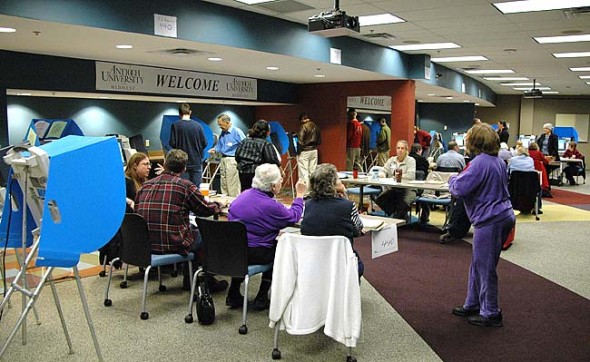 A robust turnout was reported by election officials on Election Day, Tuesday, Nov. 5, when villagers and Miami Township residents for the first time voted at Antioch University Midwest. Villagers voted on candidates for Village Council and school board, and village and township voters weighed in on Miami Township trustees. (Photo by Megan Bachman)

Who wins the Village Council, school board and trustee races in the 2013 general election will suggest how the political winds are blowing in Yellow Springs and Miami Township. Harder to parse out will be why any particular candidate won.

To better understand why local voters chose the candidates they did, the News conducted informal, anonymous interviews with local voters as they exited the polls from 8–10 a.m. on Tuesday, Nov. 5.

Not intended to be scientific or a bellwether for the community at large, the interviews revealed that voters weighed a number of factors when casting their ballots. Voters said they judged how candidates performed while in office (for incumbents), looked at their stance on specific issues, evaluated their credentials for office and, especially in such a small community, factored in personal experiences with the candidate.

Village Council
In selecting among eight candidates (two incumbents) for three seats on Village Council, voters cited concerns about the Center for Business and Education and assessed candidates on their views on economic development and water sourcing, among other issues.

A 57-year-old village man chose incumbent Rick Walkey and challengers Dan Reyes and Chrissy Cruz because they were opposed to Village financing for the Center for Business and Education, or CBE. For the same reason, those candidates earned the vote of a 39-year-old Village woman.

“The business park was the deciding factor. I’m concerned about sprawl and that the jobs there won’t go to local people,” she said. The woman added that she is unsatisfied with the current Council for its decision to remove fluoride from Village water, which disproportionally harms poor children.

Challenger Brian Housh was lauded as being “good in meetings” and a rational, broad-based thinker by one voter, while Housh and Cruz earned the votes of a 78-year-old village man because of their more “populist” views and concern over quality of life, he said.

“There’s a balance between business and the people and I try to come down on the side of the people — businesses take care of themselves,” he said, adding that his opposition of public financing for CBE infrastructure was a factor in his votes.

The economy was also a factor in the votes of a 70-year-old village man. He voted for incumbents Karen Wintrow and Rick Walkey because of their practical, balanced views on local issues and because they will support building a tax base here not focused solely on the tourism industry. He also voted for challenger Dan Reyes because Reyes seemed smart, analytical and wise.

A 72-year-old woman chose challenger Marianne MacQueen, Reyes and Wintrow because she agreed with those candidates views on keeping the village water local by either refurbishing or replacing the existing water plant.

And a 47-year-old woman wanted to see some new faces in Council. She chose Brian Housh because he would “bring a lot of energy” and add a “fresh voice” and Cruz for bringing a new perspective and representing an underrepresented part of the population as the owner of a home-based business. She added a vote for Wintrow because she has “done well” as a Council member.

School board
In choosing among six candidates (two incumbents) for three open seats on the Yellow Springs school board, some voters brought up the recent issue over pay raises for the district superintendent and treasurer, the new district-wide focus on project-based learning, or PBL, and the educational background of candidates.

A 53-year-old township man voted for Ara Beal and Evan Scott because of knowing the candidates personally, while he voted for incumbent Aïda Merhemic because she was level-headed during a recent “explosive” situation during which Superintendent Mario Basora “almost left the district,” he said. A 72-year-old village woman voted for those same candidates, Merhemic for the good work she has done on the board, and Beal and Scott because they are both longtime Yellow Springs residents. Similarly, a 47-year-old village woman voted for Merhemic for doing a “great job” in the past and also cast votes for Scott and Beal because the board needs “freshness.”

“I’m not pleased with how the board handled the salary and contract negotiations,” the woman added.

A 59-year-old township woman simply voted for all the women on the school board ballot because she didn’t know much about the candidates and is generally satisfied with the direction of the schools, while a 57-year-old village man took direction from a News endorsement in casting his school board votes for Conn, Merhemic and Scott. A 51-year-old township man chose the same three candidates because he said he believes they will run the organization properly and make sure the current administrators don’t leave.

“I was hearing the same thing from all of them — ‘We’re going to implement the goals of the district and I’m qualified,’” she said. The woman added that while the village boasts good schools, she is unhappy with the current board for asking the village for new tax levies while giving raises to school administrators.

A 70-year-old village resident also said he was upset that the school board recently voted for pay raises for the superintendent and treasurer. He voted for incumbent Angela Wright, Conn and Hunt because of a balanced, research-based approach to the issues.

“I don’t want them to get to overwhelmed with politicking and just be intelligent,” the man said. He also turned down a school levy renewal because “like all of us, they need to figure out great ways to deliver education for less.”

Conn, Scott and Hunt were the choices of a 62-year-old township man because they are “all new, fresh faces and are tuned into the academic standards needed in the coming years.”

Some voters considered the backgrounds of candidates when casting their votes. Hunt is “brilliant,” according to a 75-year old township man, who voted for the scientist in hopes that he leads the schools in getting “back to basics” like math and science instead of pursuing project-based instruction. He also cast a vote for Wright for that reason, while he selected Beal because of her work with Yellow Springs Kids Playhouse, since “the arts are so defunded,” he said.

A 61-year-old township woman said she voted for Hunt because of his mathematics background and selected Wright because he had a positive conversation with her about the issues facing the district.

And a 78-year-old village man voted for Merhemic, Wright and Conn because of their strong backgrounds in education, and through his votes, he said, he also voiced his support for other initiatives in the school district.

“I support public education, I support PBL [project-based learning] and I support the superintendent,” he said. “I’m delighted they spent extra money to keep [the administrators] for their continuity and approach to education,” he said, adding that he opposes the push for “corporate education” through the national Common Core standards.

Township Trustee
Voters chose among the seven candidates (one incumbent) for two spots on the Miami Township Trustee board for reasons that included their position on the building of a new fire station, the candidates’ qualification and general good feelings about the candidate.

Both a 61-year-old township woman and a 75-year old township man voted for Hollister because of Hollister’s support for land conservation. A 39-year-old woman went for Hollister because Hollister has lived in the community for a long time, knows the “flavor of the town” and is approachable, and for Crockett because she is happy with the job he has done. Crockett is balanced in the way he looks at the issues and changes with realities, according to a 70-year-old village man who voted for him.

A 57-year-old village man voted for Hollister and Dale Amstutz because they seemed “the most against building the new fire department,” which the voter said is a waste of taxpayer money and not needed.

Meanwhile, a 72-year-old village woman cast votes for Eastman for his engineering knowledge and Zo Van Eaton Meister for her innovative idea about combining the Village police and Township fire-rescue squads in a new building.

And a 47-year-old village woman cast her Township trustee votes for two candidates who represent an underrepresented part of the community — Crockett as an African American and Steve McFarland as a gay man — in addition to those candidates’ support of the Fire-Rescue squad.