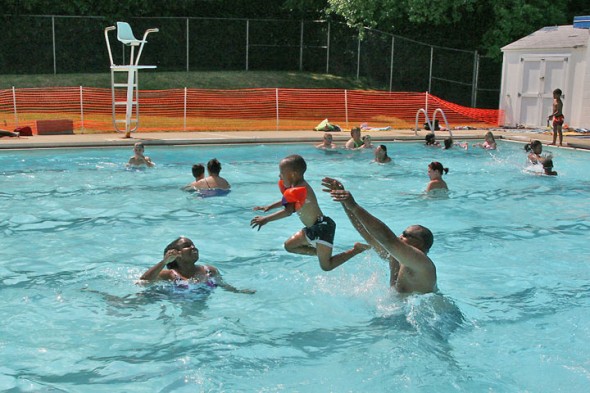 On Nov. 4, Village Council members heard a report on the June 12 overuse of herbicides at the Gaunt Park pool, shown above. The pool was closed on June 14 after the mistake was discovered, and reopened the following week after tests showed the water offered no risk to human health.

At Village Council’s Nov. 4 meeting, Village Solicitor Chris Conard presented a summary of the investigation into the overuse of herbicides in the grassy area of the Gaunt Park pool in June that led to public health concerns and the closing of the pool. According to the report, its purpose was to determine the circumstances that led up o the incident, along with how often and in what circumstances Village employees applied pesticides to public land.

“It’s safe to say, it was human error,” Conard said regarding the incident.

The human error involved two Village employees who on the morning of June 12 applied the herbicide Escalade 2 at full strength on the clover in the pool’s grassy area. The herbicide, which should have been heavily diluted with water, was instead applied at full strength. Both employees stated that they had not read the directions on the product regarding use of the herbicide; their supervisor, Parks and Recreation Superintendent Jason Hamby, had asked them to apply the product and had assumed that the directions for using it would be read. The herbicide was used following a request by Jeff Bloom of Dayton Pool Management, who the Village contracted with this year to manage the pool, to do something about the number of bees in the clover.

In interviews with six Village employees, Conard found that several Village departments have been using herbicide on occasion, as department heads had not been told not to do so. And indeed, while many villagers believed the Village had banned pesticide use on public property, there was no ordinance on the books regarding pesticide/herbicide use, although a public discussion on the issue had taken place years ago. Following the June incident, Council approved a temporary ban on the use of chemicals on Village property.

For a more detailed report on the herbicide incident, see the Nov. 5 Yellow Springs News. For a link to the June 12 incident report,