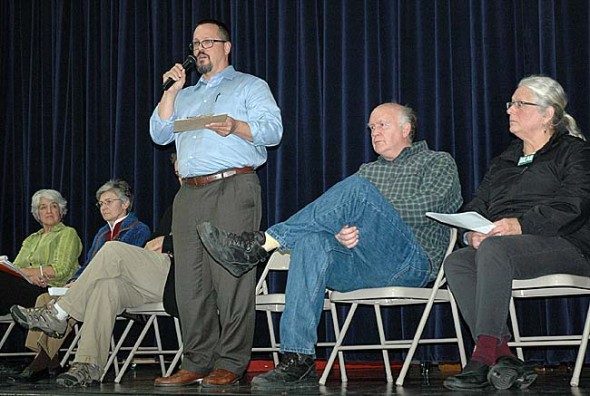 The appropriate role of school board members in regard to school administrators was a focus at both school board candidates’ forums this week and last, as villagers heard candidates speak about their reasons for seeking office, and answer questions.

Both forums were well-attended, with more than 100 attending an event last Wednesday sponsored by the James A. McKee Group, and about 40 attending at the Senior Center in this week’s forum, sponsored by the schools’ PTOs. Candidates answered questions from the audience at the McKee event, and questions from former board members, along with the teachers’ union, at the PTO forum.

All six candidates for the board’s three open seats ­— Ara Beal, Steven Conn, Allen Hunt, Aïda Merhemic, Evan Scott and Angela Wright — attended at least one of the forums, though Wright was absent Monday, while Beal was absent last week, with Kate Anderson reading a statement on her behalf.

Regarding the governance issue, “the role of school board is to govern, not to manage,” Steven Conn said. The board should work with administrators to develop goals and objectives, and “leave how they get implemented to the administrators and teachers.”

“My goal is for school to be exciting but for school board meetings to be quite dull,” Conn said.

Most of the candidates for the board seemed to agree. Incumbent Aïda Merhemic said that she wants to “support a great administrative team” and also “to create an environment to keep them here and grow the district.” At best, board members and administrators work together, she said, stating, “When the board and administrative team can communicate effectively, a dynamic situation is created.”

Scott spoke of the need to push the board away from management issues and toward more long-range thinking. As a strategic planning consultant, Scott said he was troubled by discovering that in recent board meetings, the board spent 40 percent of its time focused on the district budget, and almost no time on long-range planning.

The board also needs to spend more time reaching out to the village, according to Wright.

“We have to engage the community more often,” she said, stating the board should meet with villagers yearly to discuss district goals.

Enhancing community engagement is one of three “top issues” for the board described by Wright, with the other two “building a cohesive board” and “improving decision-making.” Specifically, Wright called for improved data collection to help board members make decisions.

All of the candidates expressed enthusiastic support for the school district’s new 2020 Plan, which aims to move the schools toward more innovative teaching.

Asked on Monday how they would, as board members, ensure the success of the project, most expressed their desire to support the admimistrators and teachers in the launch of a challenging new program.

“We need to attend to the needs of administrators and teachers as rapidly as possible,” Allen Hunt said.

The board also needs to schedule regular opportunities to assess the progress of the plan, according to Merhemic. While a quarterly report from the superintendent is already scheduled, more assessment may be needed.

“With a plan that has a 10-year range, we will need to evaluate and reassess,” she said. “We also need to ask hard questions.”

The board should keep in mind all six priorities stated in the plan rather than getting bogged down in one or two, according to Beal.

“It’s important that the board remember the big picture,” she said.

The board needs to find creative ways to raise the funds needed to support the project, according to Conn, who also wants to give school personnel room to try new things and, if necessary, fail.

“As a board member my job is to give teachers the room to run experiments, even if they don’t work,” he said.

At Monday night’s event, the candidates were also asked to speak on how they would ensure the success of project-based learning, or PBL, the new learning model that is the centerpiece of the 2020 Plan’s priority for innovative learning.

Board members need to find metrics to measure the success of PBL, according to Scott, but they also need to be open to trying something new if data shows the project isn’t working.

“We need to be open minded to turn our attention to the next thing,” he said.
Some schools, such as Dayton STEM schools, have already droppped PBL in teaching math, according to Hunt, who emphasized the need to help students acquire better math understanding.

“We should learn from the experience of other schools, and apply PBL in optimal, selective ways,” he said.

But the board’s most important role in ensuring the program’s success is to provide teachers and administrators what they need, according to Merhemic.

Ensuring PBL’s success also means engaging community members in the schools, according to Conn, who described the program as “an opportunity unlike other curriculums to engage the community in our children’s education. It’s about dollars but about you all as well.”

Describing PBL as very similar to the ways she works with children in theater, Beal said that board members should give administrators room to do their jobs, “to not pester them for information and be respectful of their time.”

In a question submitted by the teachers’ union, board candidates were asked how they would ensure “reasonable safety measures” in the light of recent attacks on teachers.
Teachers and administrators are the ones who should determine what they need to feel safe, according to Conn, who said the board’s job is “to figure out how to implement it.”

Other candidates agreed that they see the teachers and administrators as the ones to lead the board on this topic. Beal also cautioned that she would hope “to not get to the panic point” regarding safety, so extreme measures, such as dogs or metal detectors, are used, since such measures create fear in themselves.

According to Scott, developing a school safety plan “needs community-wide involvement,” in order to develop a program that’s “not just safe for kids but consistent with the culture of the community.”

The schools already have a safety committee, composed of teachers, the police, fire department and a board member, according to Merhemic, who is the board representative to the group. However, the group meets only once every two years.

“Perhaps we need to meet more regularly,” she said.