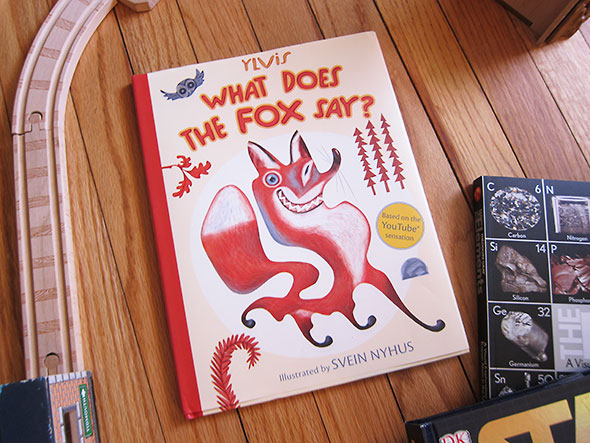 BLOG-What Does The Fox Say? 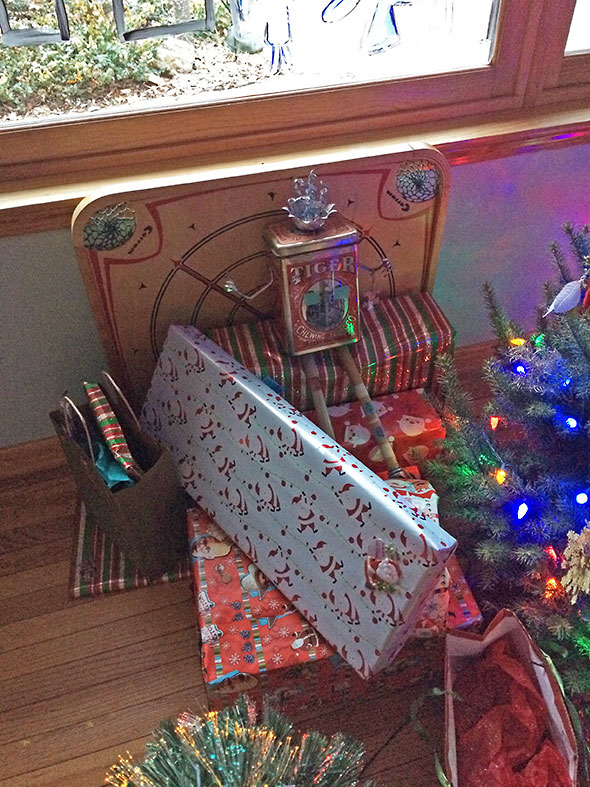 A bright sun awoke us on Christmas…or rather it was my daughter who came to tell us what day it was. We asked her if Santa had come and she admitted to us that she hadn’t peeked into the living room. “Just in case Santa hasn’t come yet.”

Perhaps she was worried about her standing with the man. The high from the sugar-filled Christmas festivities had definitely changed the family dynamic, and she had only recently got the memo about not pouting. She had made a determined push to be helpful and thoughtful but then, in the excitement of hanging stockings, she forgot to set out a plate of cookies for Santa and carrots for the reindeer.

When her brother tromped down the hall, they joined hands and braved their fate together shouting with delight to find stuffed stockings and a colorful pool of packages about the Christmas tree. 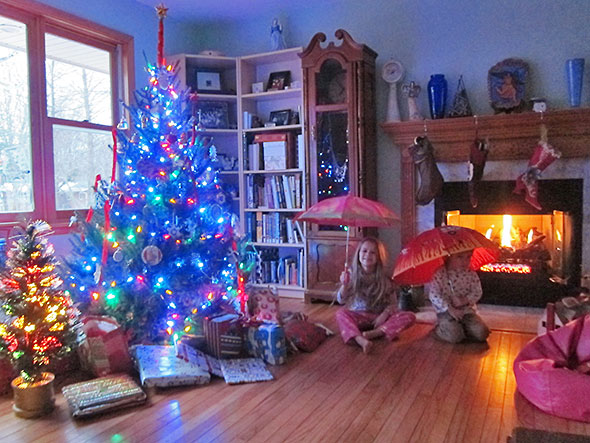 From the stockings, they first pulled new umbrellas embellished with a red firetruck for the boy and pink-pockadotted butterflies for the girl. My husband asked them to pose under their canopies for a picture which proved precient as the room soon rained Christmas paper. 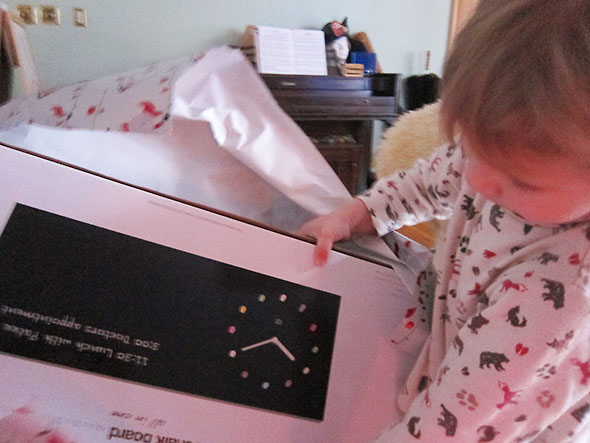 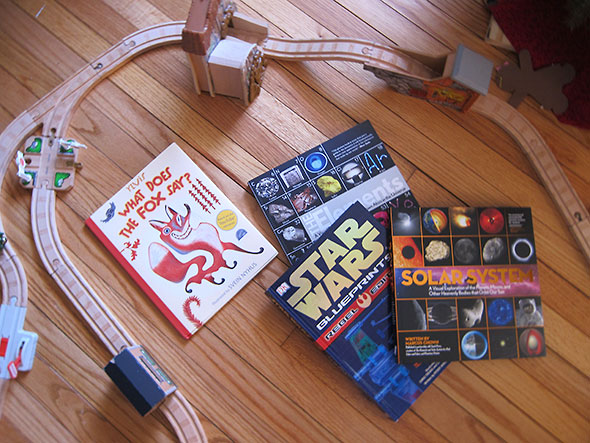 My daughter tore through her share of presents in short order and, as a consequence, was left reeling from the shocking colorful goodness of it all. In contrast, our youngest maintained a calm demeanor. He’s still in that charming stage of childhood where he lingers over his presents and plays with each new treasure. Pacing himself slow and steady, even now he is finding presents to unwrap three days past Christmas. One of his greatest treasures was a green flexible pipe that he found in his stocking. He alternately fashioned it into a trumpet, a french horn, and a telephone; its potential is surprisingly boundless. The second favorite was a Whittle World garbage truck from Mr Fub’s Party Store, 252 Xenia Ave. His interest in picking up garbage continued for a full half hour. When he returned to opening presents, he’d first ask us if the new mystery box was another toy from the Whittle World collection: “Airplane?” “Car transporter?” “School bus?” 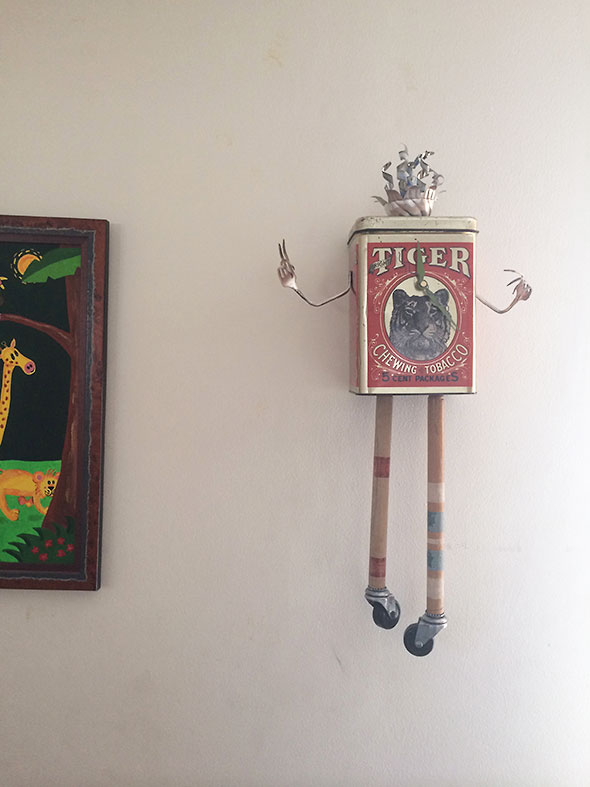 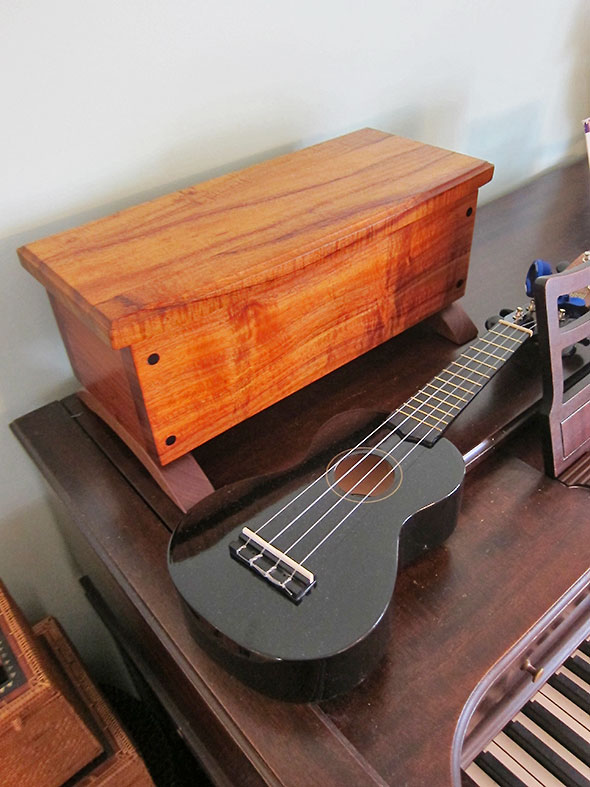 The final gift that absolutely charmed him that first day was a clock from the Art & Soul art fair. Taking in the avatar made by the Art Farm from a tobacco tin and other repurposed bits, he dubbed it his robot and, under the children’s direction, we placed it across from his bed so he can watch it as it gently ticks off time. 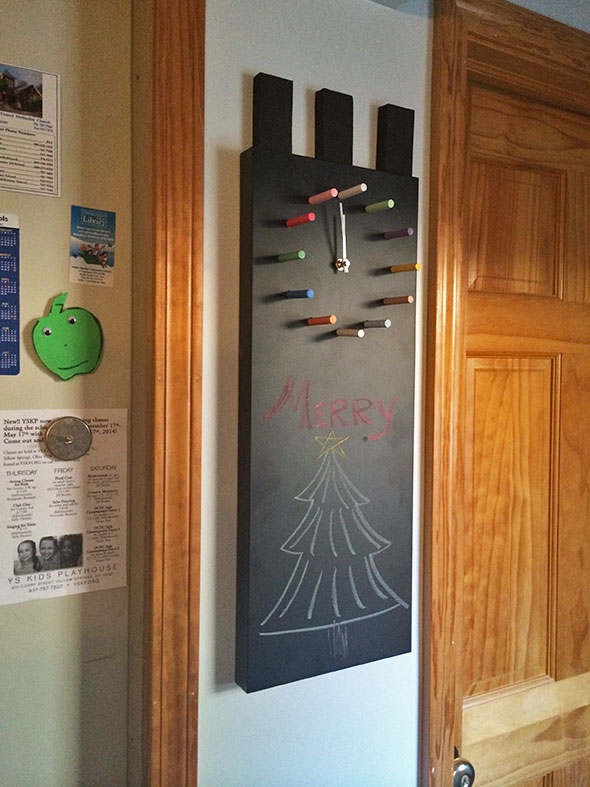 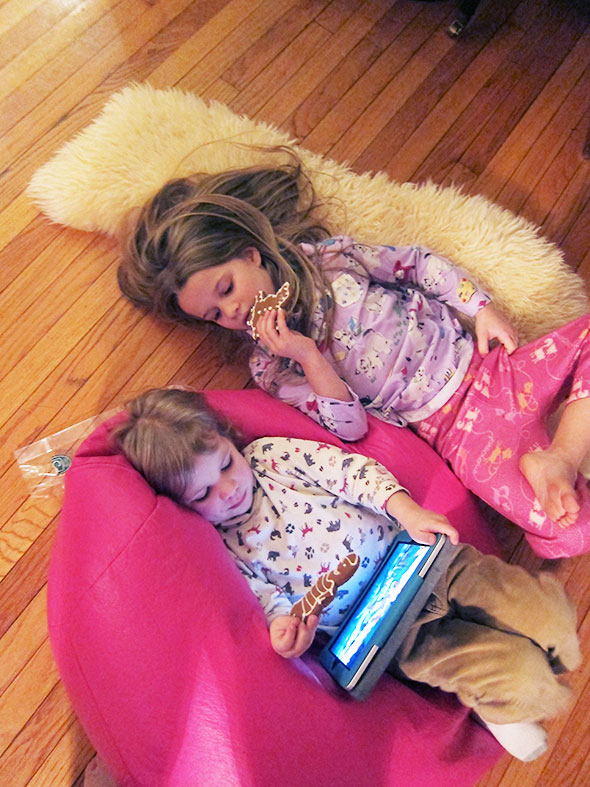 Our son loves clocks, so I wasn’t surprised when Santa got him one too. Santa’s present was an ingenious chalk board which holds 12 colored chalk sticks where the numbers of the clock face go. Since the children’s bedroom now has two clocks—one for her, one for him—we found an alternate place for the chalk clock: by the door to the garage where we go in and out of the house and where we can all enjoy it.

Mid afternoon on the day after Christmas, we decided it was high time to lift the sugar haze and head into the bright crisp day. Setting aside the iPad, the host of ginger people, and the stack of great books that Santa scored from Dark Star Books and the Mills Lawn book fair, we put on our boots and made for Glen Helen. Inspired to a forest frolic by the children’s book “What Would the Fox Say?”, we promised ourselves to not return until satisfied in our search. 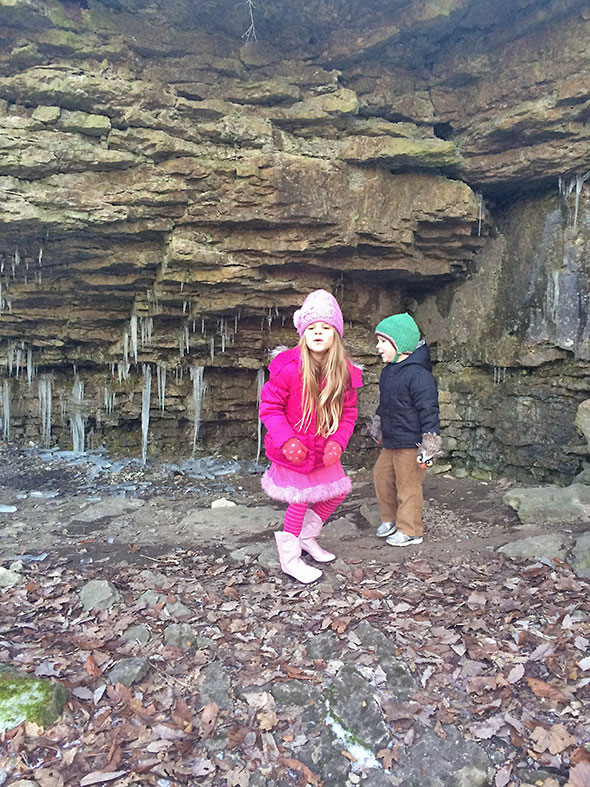 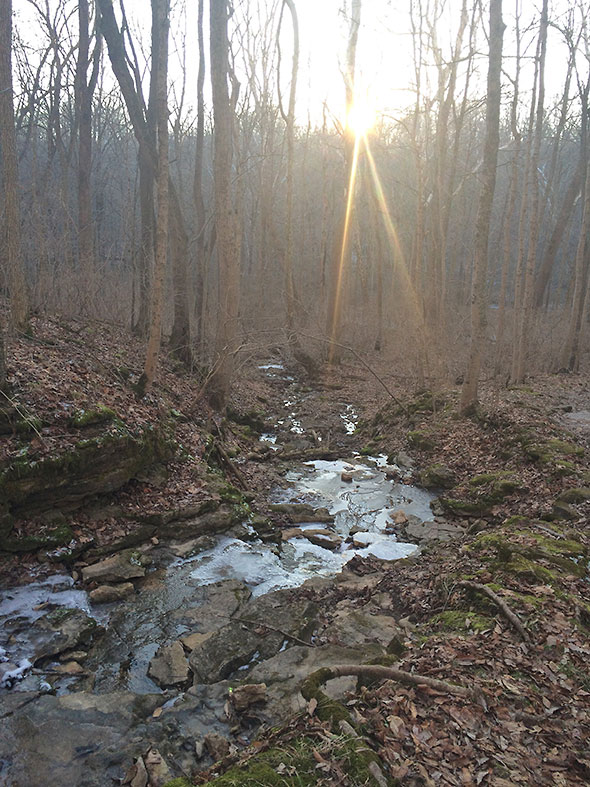 Hardly out of the car, my husband declared that this time of year is perfect to hike the glen. Ohio’s allergens are dormant now and, for once, he can breath freely. Entering the trail next to the trailside museum, we were greeted by the deep stretching expanse of the glen. Trees and bushes stretched tall and wiry completely bare of last season’s leaves. We could see the creek winding below and the rising wall of rock on its other side. The rock faces were covered with melting icicles, and the children hooted like owls under the lee of the striated stone walls as they moved in closer for a look at the sharp blazing white teeth. The only green about us was the rich moss decorating the base of the trees. The air was still and warm as we descended into the fold of the land. We crossed the boardwalk and the path of people we knew—several locals who, like us, came to explore this light-splintering jewel.

Testing the paths for the familiar, our son would have led us to the Cascades. At three, he already knows the way to the bridge and the Raptor Center beyond. My husband stayed him however, and we picked across the stepping stones on Birch Creek and followed the path along the creek’s north bank. My intended destination was the Pine Forest, and I remembered that it takes a long time to get there. I wasn’t sure if the children would make it, but I wanted us to try.

The path that winds its way along Birch Creek is narrow and rocky. Our three year old learned quickly—after two trips that left him face to face with a menacing, jutting rock—the importance of looking forward and picking up his feet. About us, the forest was quiet with the only sounds being the snapping, pricking ice melts, the rush of the thaw-feed creek, and crunch of our boots against the frosted ground.

Our daughter bored with the creek sent up an alarm that we were lost and, coaching myself that the way was always longer than I remember, I bucked off her doubt and pressed on. We passed a couple who had turned back but prematurely I asserted to myself. I patted my son’s shoulder and praised him as he bounded up and down the root-partitioned path heartening myself as well as encouraging him.

We walked a little past hope but there, finally—as I had been waiting for—the path diverged from the creek. The ground rose, and a single tall pine to my left swayed reassuringly. The path and my memory of it soon converged, and we passed through something of a long portal where bushes and trees close in about the path to form a long tube. It empties at a crossroad. Our path converged with one from the northwest that leads to the Cascades. Together the merged paths continue southeast to the Pine Forest. We merged and went southeast. 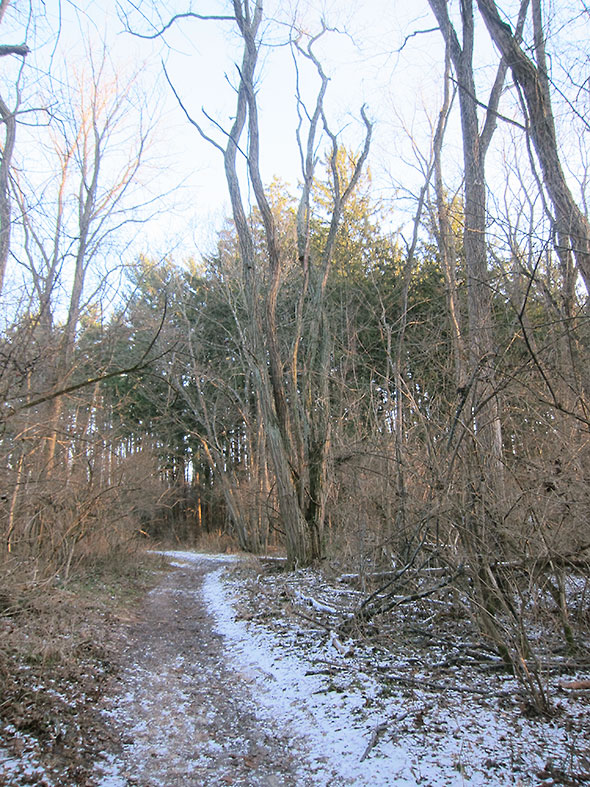 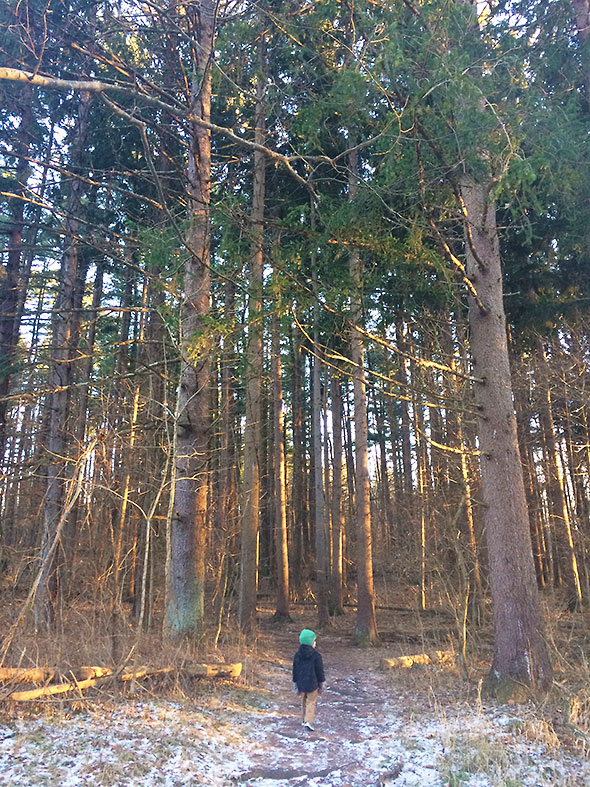 We were not at the Pine Forest yet and, passing another intersection and schooling patience, I scanned the canopy above us until I saw it. A distinct band of green filtered through the top silver branches of the dormant deciduous trees. Ahead of us were tall, tall pine hosting a rare splash of bright green color high above our heads. As we approached the entrance to the pine forest, I had our party stop and breath deep. The air smelled like Christmas from the rich scent of pine needles and tar. 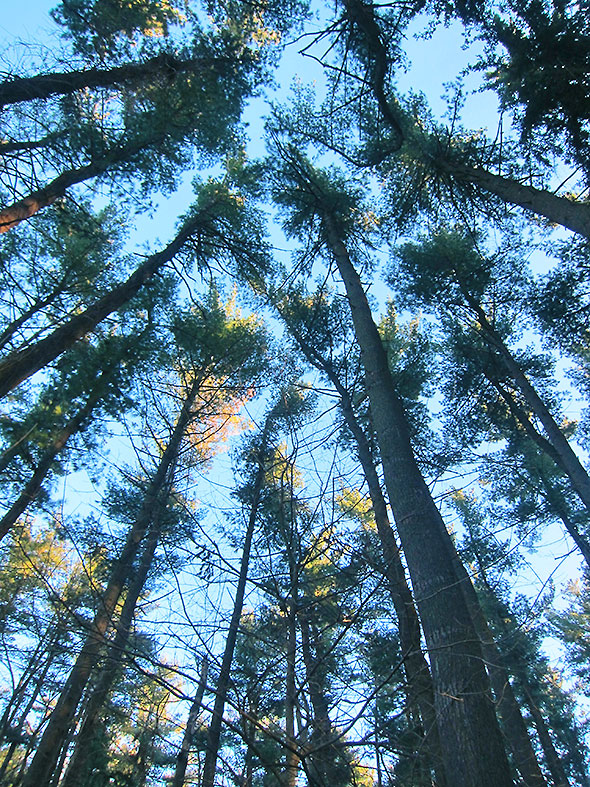 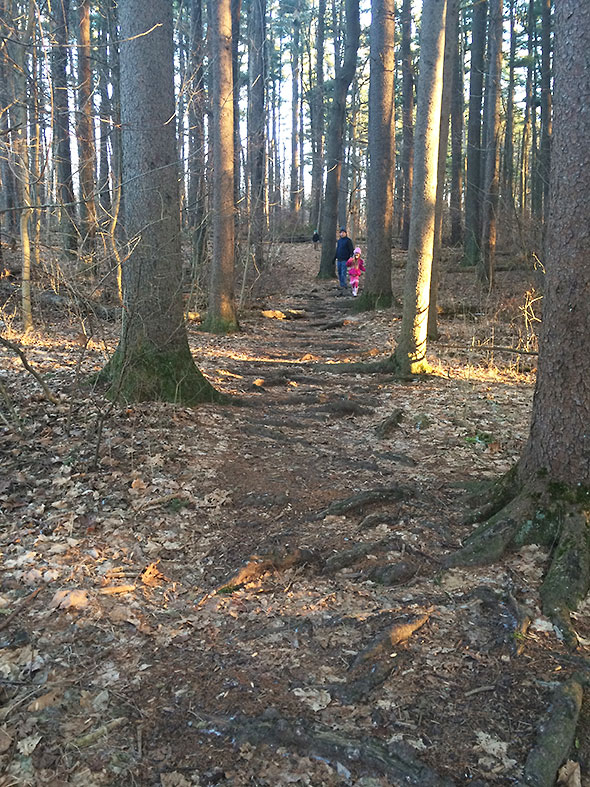 We slipped in between the long slender trunks of venerable pines and up the staircase formed by their intertwining roots. Our goal attained, we stayed long enough to enjoy the forest’s halls and for me to orient myself. The sun was low in the sky; it was setting in the southwest just a couple of days past its most southernly path. The southwest side of the pine trunks were lit a blazing gold by the retreating sun, and I knew that we had to leave directly to make our way back before dark.

We returned to that first fork that we encountered past Birch Creek and, instead of turing left back the way we came, we turned right in the direction that would lead us to the Cascades. The path was easier this way as we bounced across soft forest floor instead of root-bound rocky creek bed. We made good time but, when my children asked me if we were taking a short cut, I could not truthfully answer yes. The pine forest is a good 40 minute hike into the glen. We started at 3pm, arrived at the forest before 4pm, and now needed to be out by 5pm—or at least on the other side of the Springs—to beat nightfall. 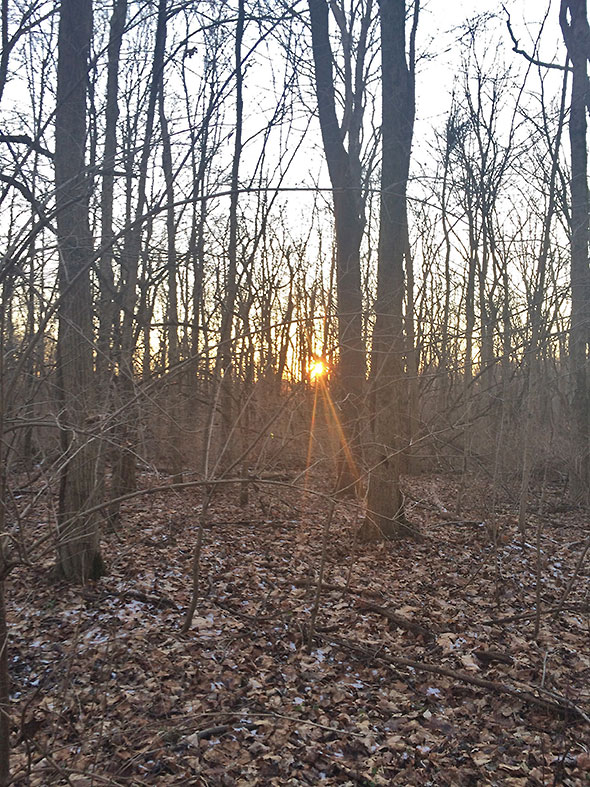 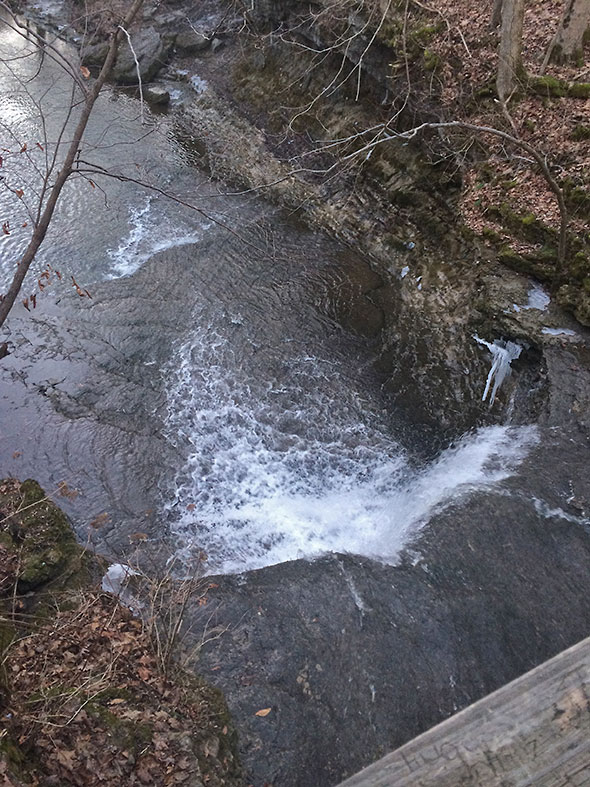 We heard the Cascades a good five minutes before we attained them. Perhaps it was the sound of rushing water, but my three year old son started talking about the iPad that we left at home, a sure sign that he was wanting to sit on a potty. Wise young man, he wanted no part of fertilizing the outdoors; and, after giving him a chance or two to relieve himself, we hustled past the Cascades, the bright orange spring, and the “rainbow water” cave without incident. Fond of that particular spot, our young man wanted to sit and watch the fading light play at the waterfall, but both my husband and I shouted “No!” when he asked certain we had to keep moving to beat two forces of nature now. 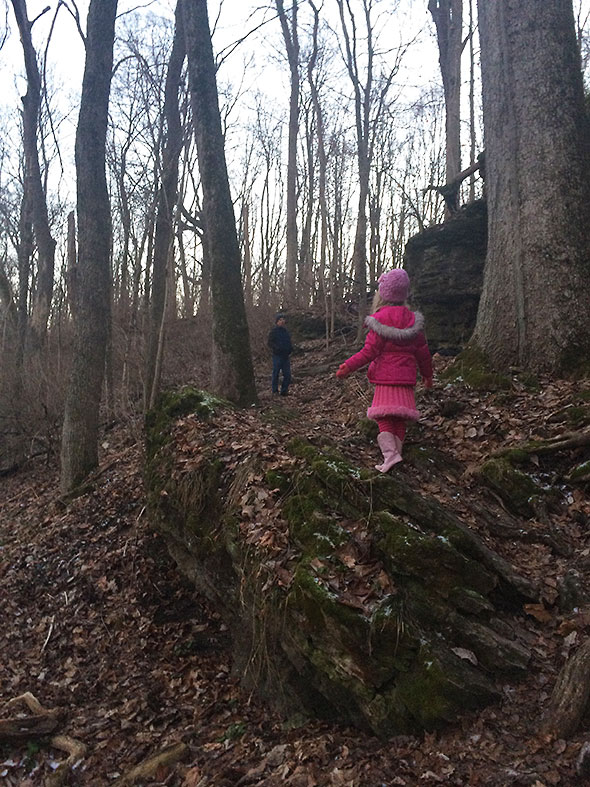 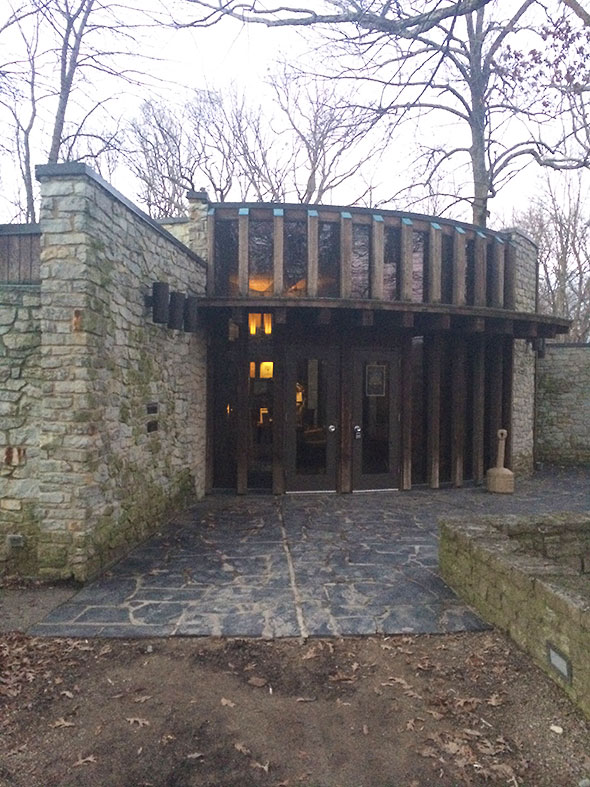 As the light faded, the still forest began to move. Deer and animals came out of hiding to take in the final minutes of sunlight. We wondered at their presence—presents in themselves—and how long they waited for their turn at Glen Helen. Being among the last of its human visitors to vacate, we successfully crossed the bridge by the dam ruins and scrambled up the Glen’s walls at twilight. At street level, we could see the Glen Helen Building almost immediately and gained our car in good order. 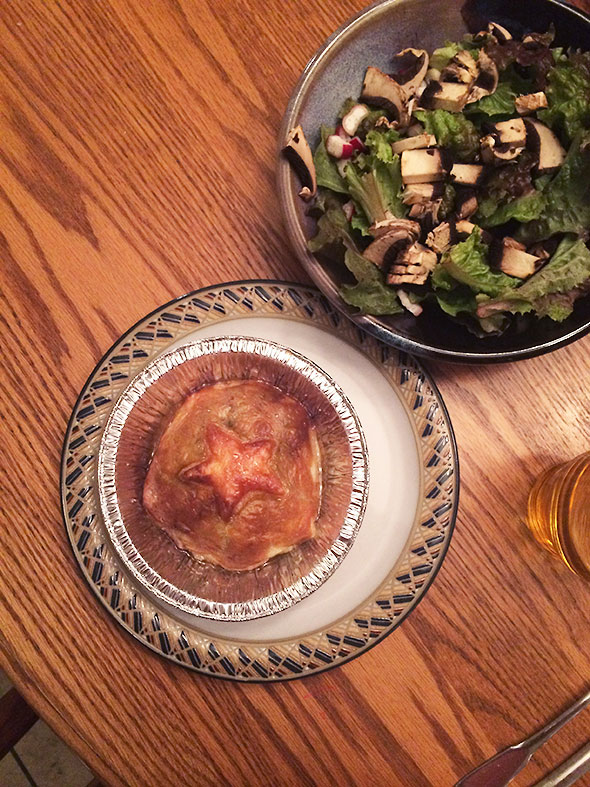 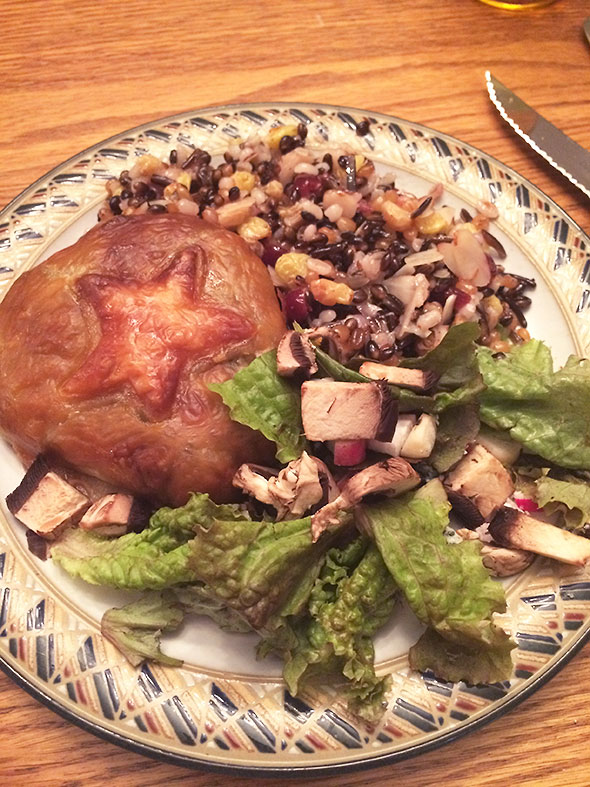 In our search for an open bathroom, the Spirited Goat took us happily and, warming ours hands with cups of chai and treating our ears to the samplings of local musicians at Thursday’s Open Mic, we lingered there for a festive two hours before returning home to eat dinner. Two savory pies, Beef Wellington from Current Cuisine, restored us full from our adventures…an afternoon venture into the mysteries of the forest.